Top Posts
Funko & The Pokémon Company Team Up for...
A Free Demo of Pokémon Mystery Dungeon: Rescue...
Enjoy Big Savings During the “Remasters & Retro”...
Sign-Up Now to Participate in the Super Smash...
Make Plans Now to Attend the Final Fantasy...
Limited Run Games Announces a Physical Release of...
“Marvel’s Spider-Man Script Book” Swings Into Bookstores This...
Our Interview with Garrick Campsey About His Unique...
Square Enix Announces a Kingdom Hearts All-in-1 Package...
Apply Now for Full-Time Openings & Summer Internships...
Get Ready to “Wall Jump” with Family &...
Niantic Announces a Fun Filled February For Pokémon...
First Person, Sci-Fi Puzzler, The Turing Test, Launches...
Mobile Title, Dragon Quest of the Stars, Releases...
Our Interview with Jared Barr from Thetau Games...
Upcoming Toy, Game, & Comic Book Conventions You...
Nintendo Announces an Animal Crossing: New Horizons Switch...
Humorous, Action RPG Kofi Quest: Alpha MOD Ventures...
Nintendo Details Subscription Options & Features for Their...
Mega Man Blasts into Action in the Latest...
Tornadus Spins into Tier 5 Raids February 4th
Reclaim Your Youth & Free the Land of...
Try Out the Free Demo of Yooka-Laylee &...
Capcom Announces What’s Next for Monster Hunter World:...
The Pokémon Center Offers a Sweet New Line-Up...
Satisfy Your Hunger For Nostalgia with a BurgerTime...
Interview with Emma Ramsay & Andy Yong, the...
Our Interview with Carlo Orlandi, Co-Developer of the...
An Interview with Developer Dimitri Adoniou About His...
Dragon Quest Builders 2 Comes to Steam &...
The North Wilkesboro Speedway is Coming to iRacing
A “How To” for Defeating Team GO Rocket...
Our Interview with Chris Otey, Lead Designer for...
A Fast & Charge TM Guide for the...
Minecraft Earth Hits Mobile Devices Later This Year,...
Super Mario Maker 2 is Coming to the...
Konami Announces a Castlevania Anniversary Collection for PC...
Mark Backler from Sketchbook Games Talks About His...
Home Current Ingress: The Animation is Now Available for Streaming on Netflix
CurrentFeaturesPokémon Go

Ingress: The Animation is Now Available for Streaming on Netflix 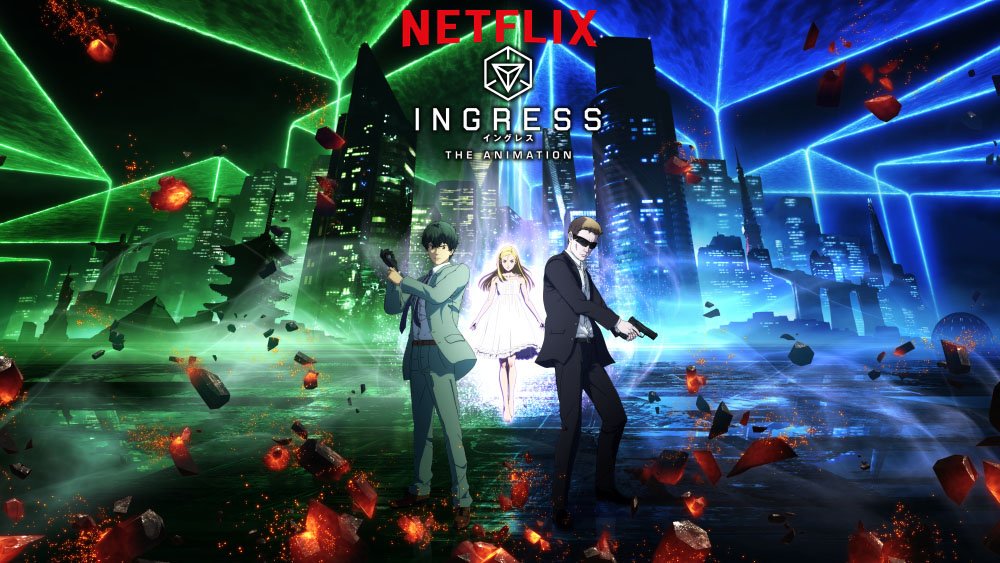 Netflix announced this week that Season 1 of Ingress: The Animation is now available for streaming on their platform, allowing fans of the popular mobile game, Ingress Prime, the opportunity to see it come to life on the small screen.

The show is divided into 11 episodes, each running about 24 minutes long. Created in a Japanese, anime style, with a cyberpunk/sci-fi/futuristic feel, the episodic is described as “exciting” and “suspenseful.”

According to Netflix, the plot of the show is as follows:

After scientists discover a mysterious substance that can influence human minds, two factions wage an all-out battle to control its awesome power.

Although season 1 has only been streaming for a few days, it’s received rave reviews so far. Viewers have also commented that the show is enjoyable even to those who’ve never played the mobile game it’s based upon.

If you want to give the show a watch, but don’t currently subscribe to Netflix streaming, you can sign-up for a free one month trial being offered right now.

Ingress: The Animation is available now. Watch a trailer for the new Netflix original on the Ingress Prime YT channel.

Want to give the mobile game a try? Download Ingress Prime for free on the Apple store & Google Play.

Heatran Returns to Tier 5 Raids with...