Top Posts
Azelf Enters Tier 5 Raids November 24th
Warm Up with a Cool Sweater from Merchoid
Terrakion, Cobalion, and Virizion Return to Tier 5...
Slice of Life, Visual Novel, I’m Oh So...
10 Kickstarter Campaigns Worth a Look
Craft, Build, and Explore with Relaxing, Open World...
Dive into the Holiday Season with New Merchandise...
13 Frighteningly Fun Indie Titles to Play at...
Hidden Object, Puzzle Adventure, Darkarta: A Broken Heart’s...
Try a Free Demo of Murder Mystery, Visual...
Play-Asia Announces 3 Spookily Spectacular PS Vita Titles...
8 Magically Magnificent Upcoming Titles for PC &...
What You Need to Know About Mega Evolutions...
Take Part in the Free Comic Book Day...
Professor Layton & the Unwound Future Travels to...
Publisher, Limited Run Games Announces What’s Next for...
Natsume Gives Fans a Small Sneak Peek at...
“Worms Rumble” Announced for PC, PS4, & PS5
The Next Update & Events Coming to Monster...
Overcooked! 2 DLC, Sun’s Out, Buns Out, Releases...
Sony Reveals 9 Titles to Kick Off Their...
A List of Physical, Collector Editions for Titles...
Set Sail on an Incredible, Zelda-esque Adventure When...
First 4 Figures Opens Pre-Orders for The Legend...
Our 10 Favorite Games from the 3-Day Guerrilla...
Crash Bandicoot 4: It’s About Time Announced for...
Our Interview with Tag of Joy About Point...
Our Interview with Cyrille Bonard About His Lively,...
Our Interview with Noema Games About Point &...
Our Favorite Games from the Sony PlayStation 5...
Our Interview with Marina Sciberras from Cowleyfornia Studios...
Our Interview with William Kruger from Silvernode Studios...
Exciting Livestreams to Watch in Lieu of This...
Our Interview with Jacob Sporrong About His Visual...
Tune in for a Season of Live News...
Pathea Games Announces Puzzle Adventurer, Ever Forward, for...
Reshiram, Zekrom, & Kyurem Come to Tier 5...
Suit up for Action with This Line of...
E3 Exclusive Funko POP! Figures Will Release May...
EMMA: Lost in Memories Journeys to Consoles
25 Indie Games We Can’t Wait to Play
Destroy All Humans! Announced for Physical Release on...
Spike Chunsoft Announces the Danganronpa Trilogy for Mobile...
Celebrate the Return of Final Fantasy VII with...
Our Top 10 Ways to Use an Elite...
Cat Quest “Pawsome Pack” Coming July 31st for...
Begin Your “Journey” on Steam, June 11th
Several Exciting Demos You Can Download for Free...
Rhythm, Action Adventure, Giraffe & Annika Travels to...
“Geek Out” Your Christmas Tree with These Cool...
Our Interview with Ayu Sakata, Writer & Production...
First 4 Figures Announces an Official Facebook Page...
Sport, Showcase, & Embrace the Latest Merchandise from...
Story of Seasons: Friends of Mineral Town is...
Our Interview with Andy Mitchell About His Upcoming...
Harvest Moon: Mad Dash Comes to Mobile Devices
Our Interview with Kristi Ramot & Dagmar Blommaert...
La-Mulana I & II Venture to Consoles
Melee Brawler, Drill Man Rumble, Comes to Steam...
Monster Hunter: World The Official Complete Works Releases...
Infuse Studio’s Breathtaking Exploration Game, Spirit of the...
Our Interview with Missing Game Studio About Their...
Explore Ruins & Hunt for Artifacts When Adam’s...
Our Interview with Lantern Studio’s Art Director, Beidi...
Luigi’s Mansion 3 Multiplayer Pack Part 1 Has...
NIS America Announces 3 Big Additions to Their...
Our Interview with Baseline Games About Developing the...
Indie Publisher, Ratalaika Games Announces What’s Next in...
Play Asia Opens Physical Pre-Orders for Twin Breaker:...
Multiplayer Races to Mario Kart Tour March 8th
A Free Demo of Final Fantasy VII Remake...
Adorable 3D Platformer, Lumote, Releases on Steam
Funko POP! Announces 9 New Additions to Their...
Action RPG, Sparklite, from NC Developers, Red Blue...
Wunderling, a Mario-esque Platformer with a Twist, Releases...
Our Interview with Avery Howell from Malheur Games...
Our Interview with Journey Bound Games About Their...
Langrisser I & II Demo Lands on the...
A Free Demo of Pokémon Mystery Dungeon: Rescue...
“Marvel’s Spider-Man Script Book” Swings Into Bookstores This...
Our Interview with Garrick Campsey About His Unique...
Square Enix Announces a Kingdom Hearts All-in-1 Package...
Apply Now for Full-Time Openings & Summer Internships...
Get Ready to “Wall Jump” with Family &...
First Person, Sci-Fi Puzzler, The Turing Test, Launches...
A “How To” For Defeating Landorus
Mobile Title, Dragon Quest of the Stars, Releases...
Our Interview with Jared Barr from Thetau Games...
Upcoming Toy, Game, & Comic Book Conventions You...
Nintendo Announces an Animal Crossing: New Horizons Switch...
Humorous, Action RPG Kofi Quest: Alpha MOD Ventures...
Mega Man Blasts into Action in the Latest...
Try Out the Free Demo of Yooka-Laylee &...
Capcom Announces What’s Next for Monster Hunter World:...
Satisfy Your Hunger For Nostalgia with a BurgerTime...
Interview with Emma Ramsay & Andy Yong, the...
Our Interview with Carlo Orlandi, Co-Developer of the...
An Interview with Developer Dimitri Adoniou About His...
The North Wilkesboro Speedway is Coming to iRacing
A “How To” for Defeating Team GO Rocket...
Our Interview with Chris Otey, Lead Designer for...
A Fast & Charge TM Guide for the...
Minecraft Earth Hits Mobile Devices Later This Year,...
Super Mario Maker 2 is Coming to the...
Konami Announces a Castlevania Anniversary Collection for PC...
Mark Backler from Sketchbook Games Talks About His...
Home How To's How to Achieve the “Battle in 10 Gym Raids” Special Research Task in Only 2 Raids (Pokémon Go)
How To'sPokémon Go 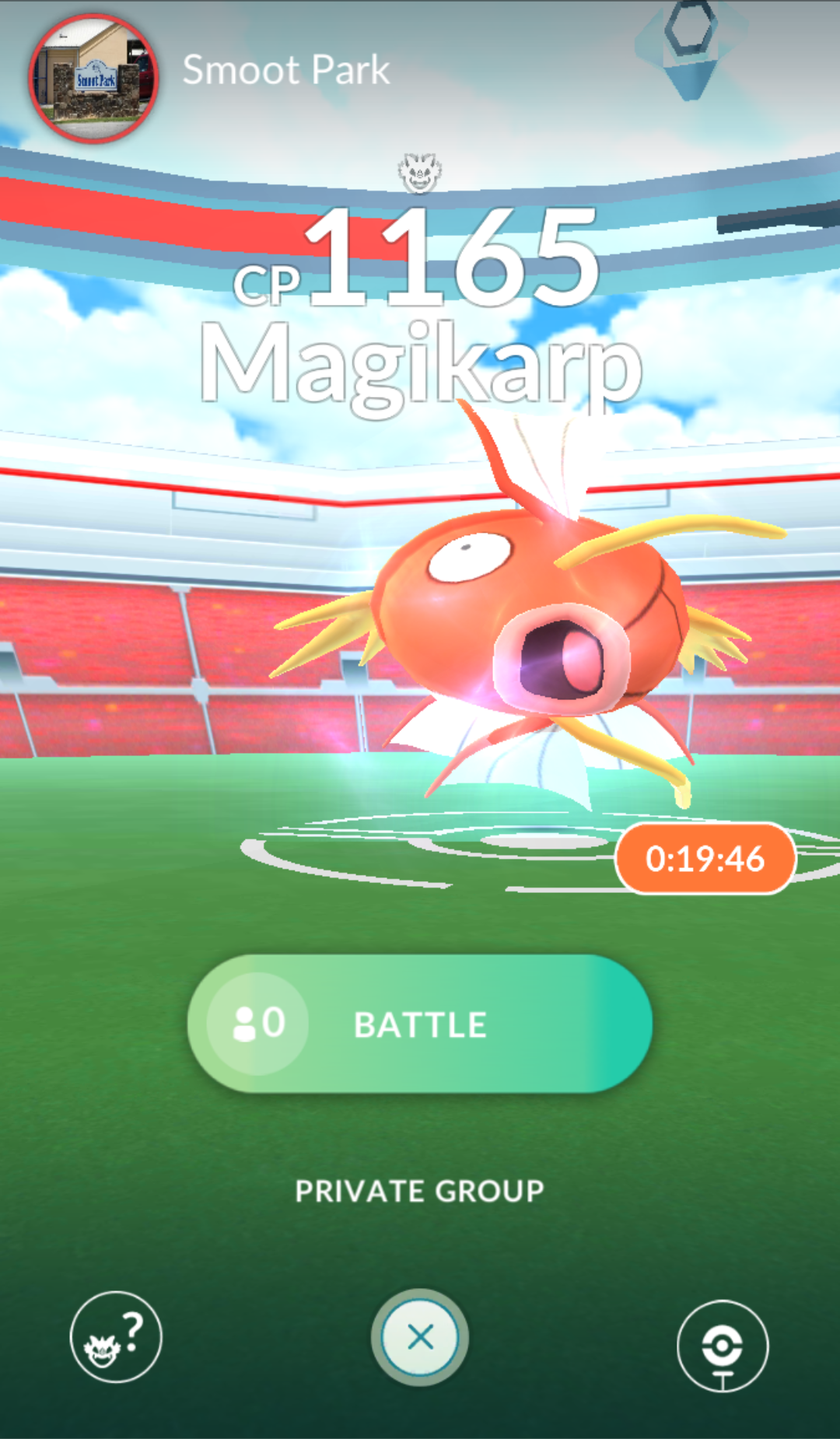 Special Research is a new Quest functionality in Pokémon Go that allows players to discover and catch a Mew in the wild after completing a series of tasks. One of the more difficult assignments in the search for Mew is the “Battle in 10 Gym Raids,” which appears in phase 6.

Fortunately, there is a way to achieve this task by fighting multiple times in only 2 different raids, saving yourself both time and money.

The reason you can do this is due to the wording of the assignment. If you notice, it says battle in 10 raids, not win 10 raids. This means players can allow themselves to lose the same gym raid multiple times, before ultimately beating it as time runs out. (Novel concept to lose a raid, I know)! Each loss/win counts toward the gym raid participation total.

Here’s how to do it.

Step 2:
Choose one of the following two Strategies.

1. Put in a team of 6 low Pokémon that you’ve caught or hatched and aren’t planning to keep.

2. Don’t fight the raid boss. Or, if you want to fight just for fun, make sure you DON’T WIN.
3. After the raid boss goes through all 6 on your team, don’t rejoin the fight. Just let it time out.
4. After losing that battle, go back in to start another raid countdown with a new team of 6 lousy Pokémon you plan to get rid of. Repeat this process until there is 6 minutes or less left on the raid boss timer.
5. The last time you fight in the raid, choose a winning team of fighters and WIN the raid. That way you can still reap the rewards of having participated in the raid, including a chance to catch the raid boss.
6. Find another Tier 1 or 2 Raid and repeat the above steps until you have all 10 raids completed.

1. Put in 1 or 2 “tanks” at the front of your team. “Tanks” are Pokémon that have high HP and/or Defense and can survive a large amount of damage before they run out of life. Perfect examples of these are Blissey, Chansey, Tyranitar, Snorlax, and Aggron.

2. Here, you can either do nothing or you can dodge the entire fight and not hit back. This is a great opportunity to practice dodging charge attacks! Dodging results in less potions and revives being needed to bring your “tank” back to life.
3. After you lose the raid, go back in immediately. Don’t revive your “tank” until after you’ve started the countdown timer.
4. Repeat Steps 1-3, until you get to the 6-minute mark.
5. The last time you fight, WIN the raid. This allows you to get the rewards and possibly catch the raid boss!

Helpful hints:
– You can do up to 8 fights with one gym raid if you start right after the egg hatches using the entire 45 minute countdown timer.
– Each raid cycle will take slightly more than 5 minutes (2-minute countdown, 3-minute battle, plus a few seconds to get back in the gym and kick off the raid fight again.)
– Don’t delay in going back in to start the 2-minute countdown timer immediately after you lose the previous battle. You will have 120 seconds to change your team or do any healing you want to do after you kick off the next fight.
– Don’t forget after you WIN the raid to go back and transfer those TKO’d Pokémon that you don’t plan to use OR heal your Pokémon that you want to keep.

We hope this quick tip will help you on the exciting path to getting your muse. Sorry, I meant Mew.

Let us know in the Comments section if you have any questions.

A special thanks to JVPBlackhawks20 who inspired this “how to” tip!

Trying to Find a Ditto? Here are the Pokémon You Need to Be Catching.

Sega Announces the Return of Shenmue 1&2, a Mega Drive Mini, the Arrival of Classic Games on the Switch & More!