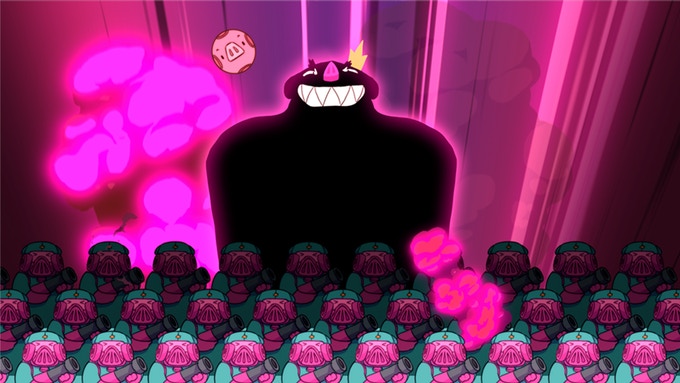 We recently spoke to the developers about this lively, fast-moving new title (which is currently seeking funding on Kickstarter). Here’s what Karuma Games had to say.

Tell us about Karuma Games. 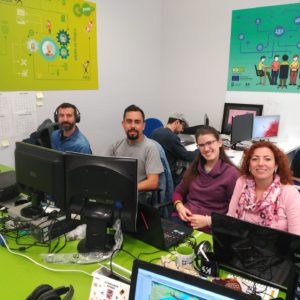 We are an indie studio located in Malaga, Spain. We currently have 4 members; 2 guys & 2 girls (an artist, a game designer, a producer, & a programmer).

2 of our members met at a Game Jam in 2018. The other 2 members (came on board) later, after falling in love with the project and deciding to collaborate on it.

Akita is set in a fantasy world that you can explore to discover secrets, hidden treasures and enchanting creatures that can help you.

To advance in the game you will have to solve puzzles and buy items and weapons. Although the game is more focused on adventure, it will not be lacking in confrontations with enemies of different strengths and (levels of) difficulty.

Who are Akita & Lucy?
Akita and Lucy are our 2 heroes, a doggy and a kitty.

Inseparable friends since they were little, Akita & Lucy are not willing to tolerate chaos in the kingdom. Although they are still very young, they are determined to defend the weak.

Embarking on a risky adventure, (Akita & Lucy) will not hesitate to face all of the enemies in their path, until they manage to stop King Pig.

Explain to us how the “allied” characters will work. How will players access them? How many will be available?

Throughout the game you’ll be able to get “allied” characters, which unlock special abilities that you can summon any time you need them.

For now, we have Kiwi, Phantom, Mini-Pig and Pajaroto as allies. Thanks to them you’ll be able to explore inaccessible (spots), collect objects, open doors and even see invisible areas.

AKPTP has a wide & diverse line-up of over 50 enemies. Describe for us a couple of the adversaries we can look forward to in the game.
You will find (a variety) of adversaries, from harmless to ferocious.

Armandillo, is a metal-shelled, rolling armadillo, who turns into a ball that will jump or roll, to throw off his opponent.

Babasa, is a viscous mass of tar that engulfs whoever approaches and spits out enemies that have to be eliminated, if you want to reach it.

The game has a lively, “Saturday Morning Cartoon” vibe. Why did you decide this was the look/feel you wanted to create?

We wanted to make a game you can have fun with and that (takes you on) an adventure in a fantastic world. The hand-drawn 2D animations, along with touches of humor through the character design and the situations you encounter, (create) that feeling.

Tell us about the language of Fansia and how/why you created it.
We want everyone to be able to enjoy the game, regardless of their language. We believe a story can be told using icons, vignettes, and animations (rather than) text.

We did, (however), think it would be fun to find texts (that were) in the language of Fansia!

AKPTP will have puzzle solving. Can you give us some examples of fun puzzles players will be asked to solve?

The game’s universe appears to be quite expansive, with lots of areas to explore and things to find. Will there be any type of reward/trophy for completionists?
Of course. But, we are not going to reveal it yet. To know what the trophy is you’ll have to complete the game.

How long will the game be? Will there be a lot of replayability?

We plan for it to be between 10 and 15 hours, depending on skill level.

There will be hidden items and areas. So, if you want to complete the game, you’ll have to go back to some levels (to find everything).

We have a lot of levels in development and if we extend the Kickstarter goal we can make (even) more!

Will AKPTP be for any age/skill level of player? Or, will it be geared more toward expert platformers?

Akita is designed for players of any age and level, in terms of difficulty and humor. (That said), there will be certain areas or puzzles that will require a bit more experience.

You’re planning a release for PC, and possibly for Switch, at a later date (if you reach your Kickstarter goal). Any idea on when the game might hit these platforms (assuming goals are met)?
Assuming there are no development delays, we plan to have the PC version within 1 year, in October 2022. The Nintendo Switch version should arrive no more than 6 months after that date.

Is there anything else you’d like us to know about AKPTP?
Akita is a game to be enjoyed playing and (is being) developed with a lot of love.

Last question. What’s your best piece of advice to fellow indie developers who are creating their very first video game?

You have to start with a small game and develop it from start to finish. That way you’ll see if the team works well together and if they’re able to solve the difficulties that arise.

Thanks so much for taking the time to answer our questions. We wish you all the best with Akita: King Pig Thinks Pink! Thank you so much for your support and for helping us spread the word about our game.

If you’d like to help Karuma Games bring their wonderful title to life, be sure to donate to their Kickstarter campaign, happening right now! (They have a tremendous amount of nice tier rewards for those who donate).

Keep up with the latest news from Karuma Games via Twitter.

Participate in an Open Alpha Weekend for Humorous, MMORPG, Genfanad (9/24-9/27)

Try a Demo of Investigative Adventure, Henry’s Day, Before Its Fall Release on Steam