Top Posts
Adorable Adventurer, Turnip Boy Commits Tax Evasion, Gets...
Watch an All-Female Cast of Speedrunners During the...
Playdate Pre-Orders are Now Open
Our (Quick) Review of Action Platformer, Effie, from...
Sign-Up to Play the Pre-Alpha of Relaxing Community...
Exciting (Steam) Game Demos You May Want to...
Mythological Metroidvania, Mira: The Legend of the Djinns,...
5 Fun Gift Ideas for the Pokémon Fan
First 4 Figures Opens Pre-Orders for 2 New...
Decorate Your Tree with These Cool Keepsake Ornaments...
Mark Your Calendar for the Limited Run Games...
June: Tales from Cyberspace Seeks Support on Kickstarter
Our 10 Favorite Game Trailers of E3 2021
Arcade 1UP Announces 4 Exciting New Cabinets Perfect...
Eastasiasoft Announces 10 Titles for Summer Release
11 Eye-Catching Indie Games Coming to Kickstarter
Cool Toy, Game, & Comic Cons Happening in...
10 Games You Can Support on Kickstarter Right...
Tune in for E3, Summer Game Fest, and...
Slice of Life, Visual Novel, I’m Oh So...
Craft, Build, and Explore with Relaxing, Open World...
Hidden Object, Puzzle Adventure, Darkarta: A Broken Heart’s...
Try a Free Demo of Murder Mystery, Visual...
What You Need to Know About Mega Evolutions...
A List of Physical, Collector Editions for Titles...
Set Sail on an Incredible, Zelda-esque Adventure When...
First 4 Figures Opens Pre-Orders for The Legend...
Our Interview with Tag of Joy About Point...
Our Interview with Cyrille Bonard About His Lively,...
Our Interview with Noema Games About Point &...
Our Interview with Marina Sciberras from Cowleyfornia Studios...
Our Interview with William Kruger from Silvernode Studios...
Our Interview with Jacob Sporrong About His Visual...
Tune in for a Season of Live News...
Pathea Games Announces Puzzle Adventurer, Ever Forward, for...
Reshiram, Zekrom, & Kyurem Come to Tier 5...
Suit up for Action with This Line of...
EMMA: Lost in Memories Journeys to Consoles
25 Indie Games We Can’t Wait to Play
Destroy All Humans! Announced for Physical Release on...
Spike Chunsoft Announces the Danganronpa Trilogy for Mobile...
Celebrate the Return of Final Fantasy VII with...
Our Top 10 Ways to Use an Elite...
Cat Quest “Pawsome Pack” Coming July 31st for...
Begin Your “Journey” on Steam, June 11th
Several Exciting Demos You Can Download for Free...
Rhythm, Action Adventure, Giraffe & Annika Travels to...
“Geek Out” Your Christmas Tree with These Cool...
Our Interview with Ayu Sakata, Writer & Production...
First 4 Figures Announces an Official Facebook Page...
Sport, Showcase, & Embrace the Latest Merchandise from...
Story of Seasons: Friends of Mineral Town is...
Our Interview with Andy Mitchell About His Upcoming...
Harvest Moon: Mad Dash Comes to Mobile Devices
Our Interview with Kristi Ramot & Dagmar Blommaert...
La-Mulana I & II Venture to Consoles
Melee Brawler, Drill Man Rumble, Comes to Steam...
Monster Hunter: World The Official Complete Works Releases...
Infuse Studio’s Breathtaking Exploration Game, Spirit of the...
Our Interview with Missing Game Studio About Their...
Explore Ruins & Hunt for Artifacts When Adam’s...
Our Interview with Lantern Studio’s Art Director, Beidi...
Luigi’s Mansion 3 Multiplayer Pack Part 1 Has...
NIS America Announces 3 Big Additions to Their...
Our Interview with Baseline Games About Developing the...
Indie Publisher, Ratalaika Games Announces What’s Next in...
Play Asia Opens Physical Pre-Orders for Twin Breaker:...
Multiplayer Races to Mario Kart Tour March 8th
A Free Demo of Final Fantasy VII Remake...
Adorable 3D Platformer, Lumote, Releases on Steam
Funko POP! Announces 9 New Additions to Their...
Action RPG, Sparklite, from NC Developers, Red Blue...
Wunderling, a Mario-esque Platformer with a Twist, Releases...
Our Interview with Avery Howell from Malheur Games...
Our Interview with Journey Bound Games About Their...
Langrisser I & II Demo Lands on the...
A Free Demo of Pokémon Mystery Dungeon: Rescue...
“Marvel’s Spider-Man Script Book” Swings Into Bookstores This...
Our Interview with Garrick Campsey About His Unique...
Square Enix Announces a Kingdom Hearts All-in-1 Package...
Apply Now for Full-Time Openings & Summer Internships...
Get Ready to “Wall Jump” with Family &...
First Person, Sci-Fi Puzzler, The Turing Test, Launches...
A “How To” For Defeating Landorus
Mobile Title, Dragon Quest of the Stars, Releases...
Our Interview with Jared Barr from Thetau Games...
Upcoming Toy, Game, & Comic Book Conventions You...
Nintendo Announces an Animal Crossing: New Horizons Switch...
Humorous, Action RPG Kofi Quest: Alpha MOD Ventures...
Mega Man Blasts into Action in the Latest...
Try Out the Free Demo of Yooka-Laylee &...
Capcom Announces What’s Next for Monster Hunter World:...
Satisfy Your Hunger For Nostalgia with a BurgerTime...
Interview with Emma Ramsay & Andy Yong, the...
Our Interview with Carlo Orlandi, Co-Developer of the...
An Interview with Developer Dimitri Adoniou About His...
The North Wilkesboro Speedway is Coming to iRacing
A “How To” for Defeating Team GO Rocket...
Our Interview with Chris Otey, Lead Designer for...
A Fast & Charge TM Guide for the...
Minecraft Earth Hits Mobile Devices Later This Year,...
Super Mario Maker 2 is Coming to the...
Konami Announces a Castlevania Anniversary Collection for PC...
Mark Backler from Sketchbook Games Talks About His...
Home Features Our Interview with Baseline Games About Developing the Open World Survival RPG, Nira
FeaturesGameGame Dev/PubInterviews 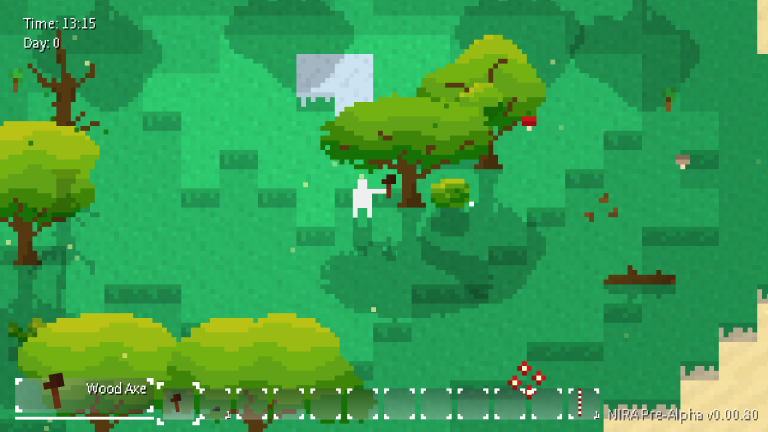 Nira is a survival game where players can craft, build, farm and explore during the day and fight hordes of enemies at night. It’s full of procedurally generated worlds to explore with almost limitless possibilities.

The game is being created by the one man team at Baseline Games and will be hitting Steam Early Access in April.

We decided to ask the developer a few questions about his upcoming title.

Tell us about your upcoming title, Nira.
Nira is a fast-paced exploration, survival game inspired by games like Terraria and Minecraft.

It features a procedurally generated open world in which you’re totally free to do whatever you want. But at night, creatures come out, so players better prepare themselves before night falls.

Why did you decide to create a survival game?
I would lie if I told you the current game is exactly what I envisioned when I started developing.

I’ve made dozens of small games that never saw light of day before I started working on a procedurally generated world system.

Even when I made that, tons of different projects came in between. But, I always saw myself coming back to this one. Eventually, one thing lead to another and Nira was born. I’ve been working on it for a couple of years now.

What was the inspiration behind the game’s graphics?

I think I kind of combined a couple of art styles into something that is also relatively easy for me to do. Art is not my strongest side, but I think I can pull off this art style pretty well.

Tell us about the difference in gameplay when it’s daytime versus night.
This is a very important aspect of Nira.

During the day, you’re pretty much free to do whatever you want. Whether it’s exploring, building a base, fishing or cooking, it’s all up to you.

When night falls, creatures spawn all over the place, so players better prepare themselves during the day to survive. They can do this by building a base for defenses, or crafting weapons to attack creatures.

Daytime is relaxing and chill, while nighttime is intense and full of action.

The game includes the very fun aspect of being able to tame and ride animals. What types of animals will players be able to ride around on?
Currently the game features:

All animals can be ridden, and I’m planning to add a lot more. The colors of their fur is also randomized, so you won’t run into identical animals anytime soon.

What types of vehicles will players be able to build and use for travel?
At the moment, Nira features a boat and a plane. I would love to expand the game with more vehicles during Early Access though.

Can you tell us about the process / challenges of creating a game with procedurally generated worlds?

I learned the hard way there’s a lot more challenges that come with this than what you might imagine.

To start, it’s incredibly complicated to create an interesting map generator for a blocky world like Nira. Not just the terrain itself, but also the assets on top need to be well balanced and make the world feel vibrant and rich.

Secondly, saving and loading is a huge pain. Because the world is infinitely generated, you can never load the entire map at once.

This constant loading and unloading gets especially complicated if you start modifying the terrain, by, for example building a base or lowering / raising terrain. (Imagine the amount of blocks being loaded and unloaded while flying a plane)!

You were recently looking for beta testers on twitter. Will you be using beta testers again before the game’s release?
Yes, a new beta round starts Tuesday, March 10th! Keep an eye on my social media for more information.

For Nira there’s currently a lot of base systems in place, like crafting, vehicles, animals, & enemies.

Everything is built modular and is ready for expansion, which is what I want to focus on once the community confirms for me the base game is stable enough to build upon.

From there, I hope the community helps me define the future direction of the game.

As for how long the Early Access will last, I’d rather leave it up to the community to tell me when the game is finished.

It looks like you have a ton of exciting features in the works to add to Nira while it’s in Early Access. Do you know how often you’ll be releasing new content?
Hopefully at least weekly.

Pushing patches to Steam only takes a couple minutes so, at the moment, I push a new patch almost every day.

Obviously, when the game is released, I’ll need to test more carefully. But, I hope to push something new at least once a week.

Do you have any plans to release Nira on platforms other than Steam?
If I can find the right partner to take care of other platforms, I would definitely be open to exploring this. However, at the moment, Steam is my top priority.

What’s your best piece of advice to fellow indie developers who are, like you, single-handedly attempting to develop their own game?

Keep your development cycle short and ask for as much feedback as you can.

They see things you will never see and will come up with ideas you haven’t thought about.

I see so many games coming out where players unanimously call out the same issues, which is such a shame.

Obviously, you can never please everyone, but you can’t always trust your own opinion on things you’ve been staring yourself blind on for months.

Thanks so much for your time. We’ll look forward to Nira’s release later this year.
Thank you for interviewing me!

Nira will hit Steam Early Access on April 24th. (You can wishlist it right now).