Top Posts
Adorable Adventurer, Turnip Boy Commits Tax Evasion, Gets...
Watch an All-Female Cast of Speedrunners During the...
Playdate Pre-Orders are Now Open
Our (Quick) Review of Action Platformer, Effie, from...
Sign-Up to Play the Pre-Alpha of Relaxing Community...
Exciting (Steam) Game Demos You May Want to...
Mythological Metroidvania, Mira: The Legend of the Djinns,...
5 Fun Gift Ideas for the Pokémon Fan
First 4 Figures Opens Pre-Orders for 2 New...
Decorate Your Tree with These Cool Keepsake Ornaments...
Mark Your Calendar for the Limited Run Games...
June: Tales from Cyberspace Seeks Support on Kickstarter
Our 10 Favorite Game Trailers of E3 2021
Arcade 1UP Announces 4 Exciting New Cabinets Perfect...
Eastasiasoft Announces 10 Titles for Summer Release
11 Eye-Catching Indie Games Coming to Kickstarter
Cool Toy, Game, & Comic Cons Happening in...
10 Games You Can Support on Kickstarter Right...
Tune in for E3, Summer Game Fest, and...
Slice of Life, Visual Novel, I’m Oh So...
Craft, Build, and Explore with Relaxing, Open World...
Hidden Object, Puzzle Adventure, Darkarta: A Broken Heart’s...
Try a Free Demo of Murder Mystery, Visual...
What You Need to Know About Mega Evolutions...
A List of Physical, Collector Editions for Titles...
Set Sail on an Incredible, Zelda-esque Adventure When...
First 4 Figures Opens Pre-Orders for The Legend...
Our Interview with Tag of Joy About Point...
Our Interview with Cyrille Bonard About His Lively,...
Our Interview with Noema Games About Point &...
Our Interview with Marina Sciberras from Cowleyfornia Studios...
Our Interview with William Kruger from Silvernode Studios...
Our Interview with Jacob Sporrong About His Visual...
Tune in for a Season of Live News...
Pathea Games Announces Puzzle Adventurer, Ever Forward, for...
Reshiram, Zekrom, & Kyurem Come to Tier 5...
Suit up for Action with This Line of...
EMMA: Lost in Memories Journeys to Consoles
25 Indie Games We Can’t Wait to Play
Destroy All Humans! Announced for Physical Release on...
Spike Chunsoft Announces the Danganronpa Trilogy for Mobile...
Celebrate the Return of Final Fantasy VII with...
Our Top 10 Ways to Use an Elite...
Cat Quest “Pawsome Pack” Coming July 31st for...
Begin Your “Journey” on Steam, June 11th
Several Exciting Demos You Can Download for Free...
Rhythm, Action Adventure, Giraffe & Annika Travels to...
“Geek Out” Your Christmas Tree with These Cool...
Our Interview with Ayu Sakata, Writer & Production...
First 4 Figures Announces an Official Facebook Page...
Sport, Showcase, & Embrace the Latest Merchandise from...
Story of Seasons: Friends of Mineral Town is...
Our Interview with Andy Mitchell About His Upcoming...
Harvest Moon: Mad Dash Comes to Mobile Devices
Our Interview with Kristi Ramot & Dagmar Blommaert...
La-Mulana I & II Venture to Consoles
Melee Brawler, Drill Man Rumble, Comes to Steam...
Monster Hunter: World The Official Complete Works Releases...
Infuse Studio’s Breathtaking Exploration Game, Spirit of the...
Our Interview with Missing Game Studio About Their...
Explore Ruins & Hunt for Artifacts When Adam’s...
Our Interview with Lantern Studio’s Art Director, Beidi...
Luigi’s Mansion 3 Multiplayer Pack Part 1 Has...
NIS America Announces 3 Big Additions to Their...
Our Interview with Baseline Games About Developing the...
Indie Publisher, Ratalaika Games Announces What’s Next in...
Play Asia Opens Physical Pre-Orders for Twin Breaker:...
Multiplayer Races to Mario Kart Tour March 8th
A Free Demo of Final Fantasy VII Remake...
Adorable 3D Platformer, Lumote, Releases on Steam
Funko POP! Announces 9 New Additions to Their...
Action RPG, Sparklite, from NC Developers, Red Blue...
Wunderling, a Mario-esque Platformer with a Twist, Releases...
Our Interview with Avery Howell from Malheur Games...
Our Interview with Journey Bound Games About Their...
Langrisser I & II Demo Lands on the...
A Free Demo of Pokémon Mystery Dungeon: Rescue...
“Marvel’s Spider-Man Script Book” Swings Into Bookstores This...
Our Interview with Garrick Campsey About His Unique...
Square Enix Announces a Kingdom Hearts All-in-1 Package...
Apply Now for Full-Time Openings & Summer Internships...
Get Ready to “Wall Jump” with Family &...
First Person, Sci-Fi Puzzler, The Turing Test, Launches...
A “How To” For Defeating Landorus
Mobile Title, Dragon Quest of the Stars, Releases...
Our Interview with Jared Barr from Thetau Games...
Upcoming Toy, Game, & Comic Book Conventions You...
Nintendo Announces an Animal Crossing: New Horizons Switch...
Humorous, Action RPG Kofi Quest: Alpha MOD Ventures...
Mega Man Blasts into Action in the Latest...
Try Out the Free Demo of Yooka-Laylee &...
Capcom Announces What’s Next for Monster Hunter World:...
Satisfy Your Hunger For Nostalgia with a BurgerTime...
Interview with Emma Ramsay & Andy Yong, the...
Our Interview with Carlo Orlandi, Co-Developer of the...
An Interview with Developer Dimitri Adoniou About His...
The North Wilkesboro Speedway is Coming to iRacing
A “How To” for Defeating Team GO Rocket...
Our Interview with Chris Otey, Lead Designer for...
A Fast & Charge TM Guide for the...
Minecraft Earth Hits Mobile Devices Later This Year,...
Super Mario Maker 2 is Coming to the...
Konami Announces a Castlevania Anniversary Collection for PC...
Mark Backler from Sketchbook Games Talks About His...
Home Event Highlights Our Southeast Game Exchange 2018 Experience
Event HighlightsFeatures 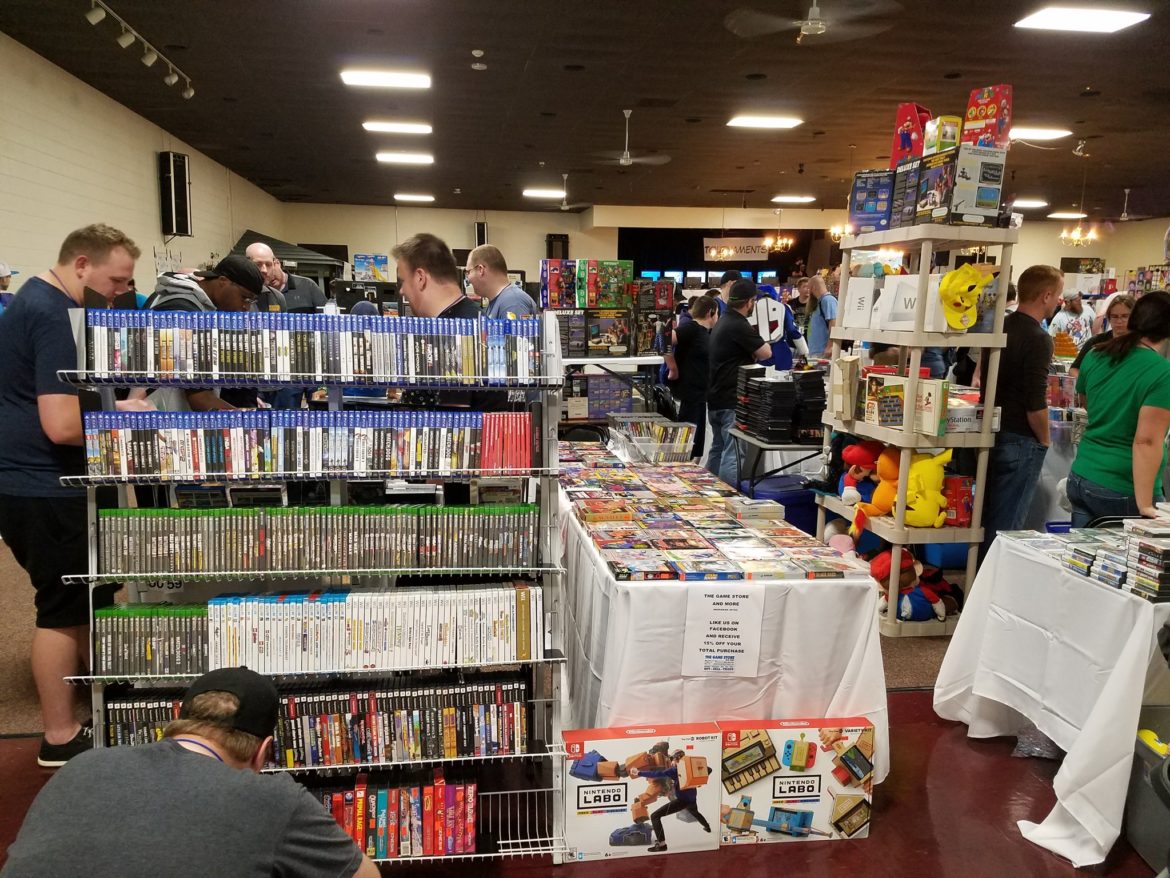 We were extremely honored and privileged to attend this year’s Southeast Game Exchange in Greenville, SC.  As promised, the convention was even bigger and better than last year. With a new location, even more space for merchandise to be displayed, and an increase of the event’s duration from 1 day to 2,  SEGE 2018 was truly the best one yet.

Our experience began at 9:45am when we arrived to find an extraordinary amount of soon to be attendees, anxiously awaiting the start of their day. 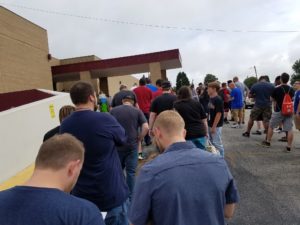 After navigating a quarter mile long line and trudging up a hill that didn’t end soon enough, we finally reached the entranceway where we were greeted by an anticipatory smile on the face of event founder, Austin Bell. 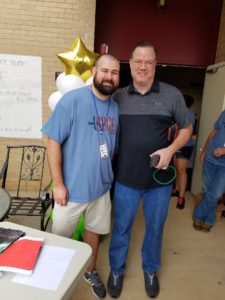 After entering the building, we were immediately taken over with nervous energy as we found ourselves in the midst of competitors, collectors, and those wanting to bend the ear of special guests. 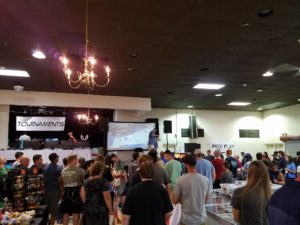 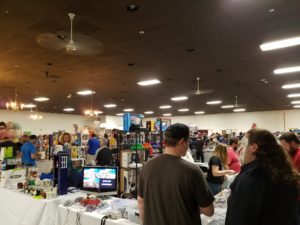 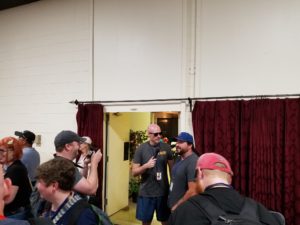 Vendors, artists, volunteers, and panelists were poised for action and ready to help.

To add to the rush of adrenaline was a backdrop of thumping, eclectic beats which helped drown out the highest level of chatter and, surprisingly, allowed one’s mind to settle in for what was ahead.

Although the choices of what to do were many, our first priority was to get to know some of the vendors & artists on the floor.

We met collectors selling some of their personal belongings. 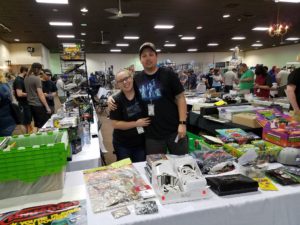 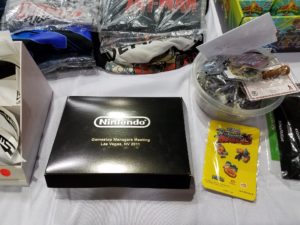 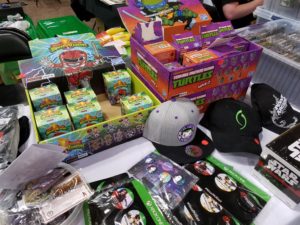 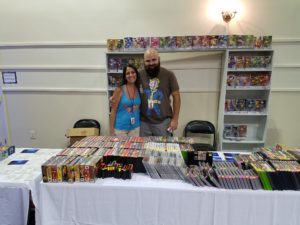 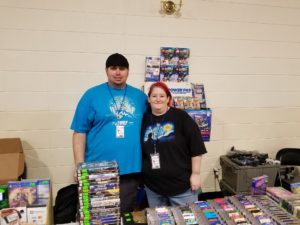 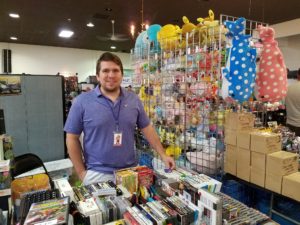 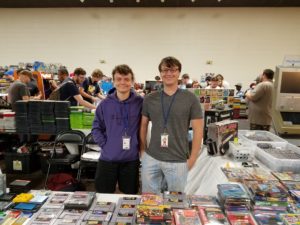 We found business owners excited to showcase their wares to a brand new audience of customers.

We discovered talented artists who had the beautiful, intriguing, and unique on display. 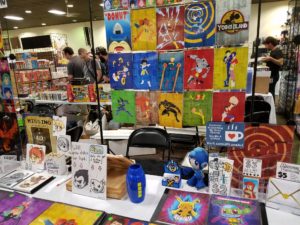 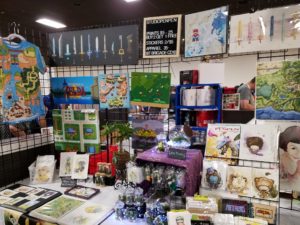 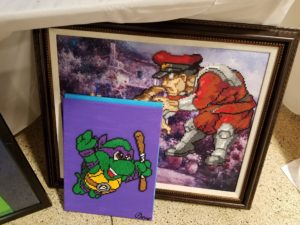 After scouring the area for people to meet, we decided to put our shopping skills to the test. 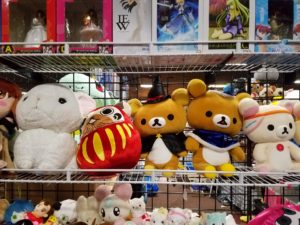 Here are a few of the niceties we snagged for ourselves. 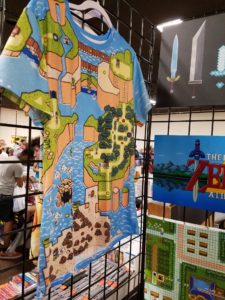 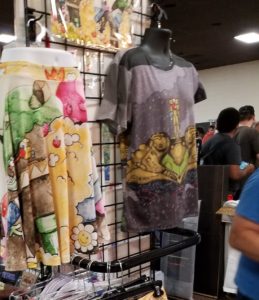 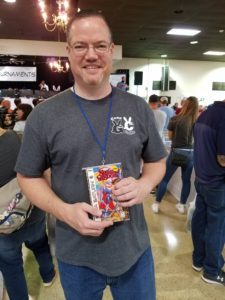 After we ended our shopping spree, we decided to take a sneak peek at the heated competitions happening in the room.

Although we decided not to participate in any of the contests ourselves, we thoroughly enjoyed watching the many, highly skilled gamers in action, taking on the likes of Fortnite, NBA 2K18, Rocket League, Super Smash Bros, and Mario Kart 8 Deluxe.

Of course, competitive gameplay wasn’t the only showdown to be had. Cosplayers also came dressed to the tee to see who could take first prize. Although we weren’t privy to the award ceremony itself, we did manage to get pictures of a few of the contenders as they browsed the floor, awaiting their chance to shine. 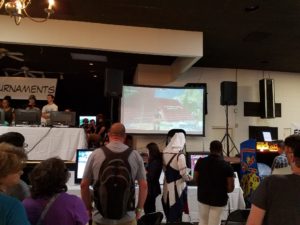 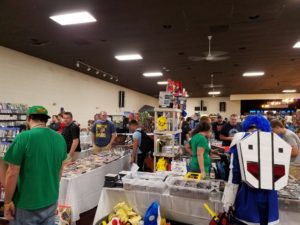 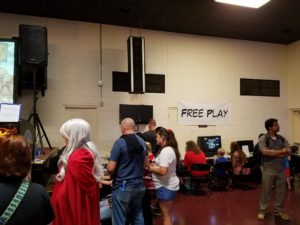 One of our favorite things to do at the SEGE is to attend special guest panels. Although our schedule proved to be quite busy over the 2 day event, we did manage to hear 3 of the many dynamic speakers talk about their fields of expertise.

Zach Hanks, professor, coach, director, and actor, conducted a Q&A with his audience about voice acting in the video game industry. During the panel, we learned that creating a voice for a character isn’t as complicated as one may think. It’s not about being overly dramatic, trying to have a “moment,” or making the character you’re playing anything more than who he/she should be. Instead, it’s about doing the work and doing it well and efficiently.

Jay Hatfield from The Game Chasers, came in to shoot the breeze with fans about topics such as the hardest and easiest games he’s ever beaten, what upcoming game he’s most looking forward to, how his YouTube series came about, and the highs and lows of being a social media personality.

Jessi Agee, Video Game Programmer at Imangi Studios (the makers of the Temple Run games) discussed the many directions one can go with a career in game development, the type of education needed for each, how those working in the industry must be open to traveling where the work takes them, and that networking with others is a crucial key to success.

As if everything we’ve mentioned already wasn’t enough, the SEGE also had drawings for door prizes. One of the best giveaways was a “Days of Play” blue & gold PlayStation 4 system, which went to one lucky winner at the end of the day on Sunday.

After two days of meeting remarkable people, finding items to add to our collections, and seeing gaming and costuming skills put to the test, we sadly and exhaustedly began our exit.

On our way out we ran into Mr. Bell’s wife, who informed us that plans for 2019 are already in motion. Although this year’s expansion was a success, there may be a further growth in size next year. There will also be the inclusion of something Austin and his wife are passionate about; tabletop games.

We could not have enjoyed our time at the SEGE more. We absolutely recommend this event for anyone who loves video games, even if you have to travel from afar to attend. These types of game centered conventions are very rare to find and this one is definitely worth your time.

We want to thank the panelists, vendors/artists, volunteers, sponsors and most especially Austin Bell for making this truly an event to remember. We’ll see you next year!

Want to see more from the SEGE? Connect to our SEGE Vendor Gallery.

Also, check out the Retro-Toy Con which will be taking place in Greenville, SC in November, our Retailer Spotlight of Richard’s Comics & Collectibles, and our Interview with Voice Actor, Zach Hanks.

Our Introduction to Speedrunning: A Panel with...