Top Posts
Adorable Adventurer, Turnip Boy Commits Tax Evasion, Gets...
Watch an All-Female Cast of Speedrunners During the...
Playdate Pre-Orders are Now Open
Our (Quick) Review of Action Platformer, Effie, from...
Sign-Up to Play the Pre-Alpha of Relaxing Community...
Exciting (Steam) Game Demos You May Want to...
Mythological Metroidvania, Mira: The Legend of the Djinns,...
5 Fun Gift Ideas for the Pokémon Fan
First 4 Figures Opens Pre-Orders for 2 New...
Decorate Your Tree with These Cool Keepsake Ornaments...
Mark Your Calendar for the Limited Run Games...
June: Tales from Cyberspace Seeks Support on Kickstarter
Our 10 Favorite Game Trailers of E3 2021
Arcade 1UP Announces 4 Exciting New Cabinets Perfect...
Eastasiasoft Announces 10 Titles for Summer Release
11 Eye-Catching Indie Games Coming to Kickstarter
Cool Toy, Game, & Comic Cons Happening in...
10 Games You Can Support on Kickstarter Right...
Tune in for E3, Summer Game Fest, and...
Slice of Life, Visual Novel, I’m Oh So...
Craft, Build, and Explore with Relaxing, Open World...
Hidden Object, Puzzle Adventure, Darkarta: A Broken Heart’s...
Try a Free Demo of Murder Mystery, Visual...
What You Need to Know About Mega Evolutions...
A List of Physical, Collector Editions for Titles...
Set Sail on an Incredible, Zelda-esque Adventure When...
First 4 Figures Opens Pre-Orders for The Legend...
Our Interview with Tag of Joy About Point...
Our Interview with Cyrille Bonard About His Lively,...
Our Interview with Noema Games About Point &...
Our Interview with Marina Sciberras from Cowleyfornia Studios...
Our Interview with William Kruger from Silvernode Studios...
Our Interview with Jacob Sporrong About His Visual...
Tune in for a Season of Live News...
Pathea Games Announces Puzzle Adventurer, Ever Forward, for...
Reshiram, Zekrom, & Kyurem Come to Tier 5...
Suit up for Action with This Line of...
EMMA: Lost in Memories Journeys to Consoles
25 Indie Games We Can’t Wait to Play
Destroy All Humans! Announced for Physical Release on...
Spike Chunsoft Announces the Danganronpa Trilogy for Mobile...
Celebrate the Return of Final Fantasy VII with...
Our Top 10 Ways to Use an Elite...
Cat Quest “Pawsome Pack” Coming July 31st for...
Begin Your “Journey” on Steam, June 11th
Several Exciting Demos You Can Download for Free...
Rhythm, Action Adventure, Giraffe & Annika Travels to...
“Geek Out” Your Christmas Tree with These Cool...
Our Interview with Ayu Sakata, Writer & Production...
First 4 Figures Announces an Official Facebook Page...
Sport, Showcase, & Embrace the Latest Merchandise from...
Story of Seasons: Friends of Mineral Town is...
Our Interview with Andy Mitchell About His Upcoming...
Harvest Moon: Mad Dash Comes to Mobile Devices
Our Interview with Kristi Ramot & Dagmar Blommaert...
La-Mulana I & II Venture to Consoles
Melee Brawler, Drill Man Rumble, Comes to Steam...
Monster Hunter: World The Official Complete Works Releases...
Infuse Studio’s Breathtaking Exploration Game, Spirit of the...
Our Interview with Missing Game Studio About Their...
Explore Ruins & Hunt for Artifacts When Adam’s...
Our Interview with Lantern Studio’s Art Director, Beidi...
Luigi’s Mansion 3 Multiplayer Pack Part 1 Has...
NIS America Announces 3 Big Additions to Their...
Our Interview with Baseline Games About Developing the...
Indie Publisher, Ratalaika Games Announces What’s Next in...
Play Asia Opens Physical Pre-Orders for Twin Breaker:...
Multiplayer Races to Mario Kart Tour March 8th
A Free Demo of Final Fantasy VII Remake...
Adorable 3D Platformer, Lumote, Releases on Steam
Funko POP! Announces 9 New Additions to Their...
Action RPG, Sparklite, from NC Developers, Red Blue...
Wunderling, a Mario-esque Platformer with a Twist, Releases...
Our Interview with Avery Howell from Malheur Games...
Our Interview with Journey Bound Games About Their...
Langrisser I & II Demo Lands on the...
A Free Demo of Pokémon Mystery Dungeon: Rescue...
“Marvel’s Spider-Man Script Book” Swings Into Bookstores This...
Our Interview with Garrick Campsey About His Unique...
Square Enix Announces a Kingdom Hearts All-in-1 Package...
Apply Now for Full-Time Openings & Summer Internships...
Get Ready to “Wall Jump” with Family &...
First Person, Sci-Fi Puzzler, The Turing Test, Launches...
A “How To” For Defeating Landorus
Mobile Title, Dragon Quest of the Stars, Releases...
Our Interview with Jared Barr from Thetau Games...
Upcoming Toy, Game, & Comic Book Conventions You...
Nintendo Announces an Animal Crossing: New Horizons Switch...
Humorous, Action RPG Kofi Quest: Alpha MOD Ventures...
Mega Man Blasts into Action in the Latest...
Try Out the Free Demo of Yooka-Laylee &...
Capcom Announces What’s Next for Monster Hunter World:...
Satisfy Your Hunger For Nostalgia with a BurgerTime...
Interview with Emma Ramsay & Andy Yong, the...
Our Interview with Carlo Orlandi, Co-Developer of the...
An Interview with Developer Dimitri Adoniou About His...
The North Wilkesboro Speedway is Coming to iRacing
A “How To” for Defeating Team GO Rocket...
Our Interview with Chris Otey, Lead Designer for...
A Fast & Charge TM Guide for the...
Minecraft Earth Hits Mobile Devices Later This Year,...
Super Mario Maker 2 is Coming to the...
Konami Announces a Castlevania Anniversary Collection for PC...
Mark Backler from Sketchbook Games Talks About His...
Home Pokémon Go We Were a Part of a Pokémon Go Ex Raid Field Test. This is What We Learned.
Pokémon Go

We Were a Part of a Pokémon Go Ex Raid Field Test. This is What We Learned. 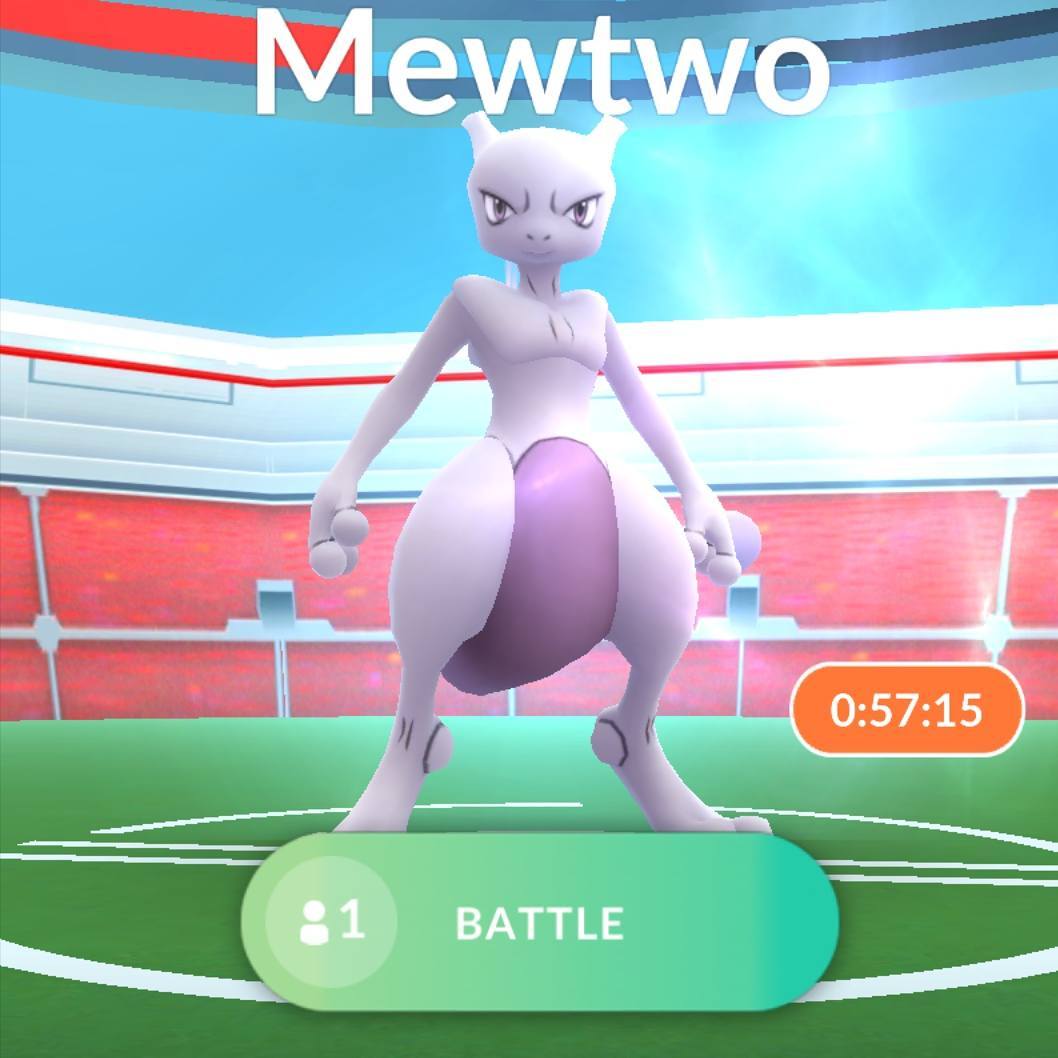 We had the honor on Saturday of participating in a field test of Niantic’s newly conceived EX Raid. Below is a quick rundown of what we learned from being a part of this special event.

What is the EX Raid?
This is an invitation only gym raid battle where Niantic decides who will participate based on a player’s level of gym raid activity/success at the location where the EX Raid is scheduled to take place. The goal of each player is to defeat and capture Mewtwo.

How do I know if I’ve been invited?
You will find an invitation in your list of gym badges.

How do I know where to go?
The invite will be attached to the gym badge that represents the EX Raid location.

Do I have to purchase a special raid pass?
No. Niantic will automatically add a special EX Raid pass to your item listing.

What time will players arrive at the venue?
It’s assumed that everyone will be excited about being part of this special event and eager to start battling Mewtwo as soon as he hatches. This means that it’s best to arrive early before the EX Raid is scheduled to take place, so you won’t miss out on all the fun.

Is gym possession important at the EX Raid?
Yes. Just like with any raid, gym possession prior to an egg hatch does allow players from that team to receive more  pokéballs for catching. With this being an invite-only situation, it’s really hit or miss as to how many members will show up from each of the 3 teams.

Individuals do have the option of arriving at the EX Raid location extra early to take possession of the gym for their team. However, if you are greatly outnumbered by people from another team, the likelihood of being able to keep your gym is not very good.

For example: We had a group of 23 people and split our group in 1/2. One group was comprised of 12 Valor members. The other group of 11 were a mix of Instinct and Mystic. When we split the group, Instinct and Mystic players had opportunity to contribute more to their specific battle, which, in turn, increased their odds of receiving more balls.

If you do have two groups trying to battle in a raid at one time, 1 of the 2 will need to set-up a private group with a special code.

What’s the maximum amount of pokéballs I will receive to capture Mewtwo?
We can’t say for certain if it’s possible to get more, but the maximum amount anyone in our group received on Saturday was 12. Those who received 12 were a part of the team that had gym control and contributed the most in the battle.

Which Pokémon do I need to use against Mewtwo?
There are many theories as to which move sets are the best. For us personally, we decided to just let the game choose our team for us. This seemed to work quite well. The top 3 that it chose were:
– Tyranitar
– Umbreon
– Lugia
Of course, this could change based on which fighters are your strongest and have certain move sets. But, again if you don’t want to worry with what to choose, just let the game do it for you.

How many people does it take to defeat Mewtwo?
We had groups of 11 and 12, both of which were more than enough. The group of 12, level 30 and above players, took down Mewtwo with 216 of the 300 seconds left on the clock. The group of 11 defeated him in 120 seconds.

What are my chances of catching Mewtwo?
Out of the 23 people that were in our group, 13 caught him.

If I catch a Mewtwo, will I get one with good stats?
As with all other raids, it’s hit or miss as to whether your Pokémon will be strong or simply amazing.

What is a perfect Mewtwo?
Based on just the CP, it appears that if you catch one that’s 2275, he’s probably going to be perfect. We actually had 2 of our group of 23 to catch one that was 100%.

Is there anything I can do to ensure I get an invite, in the future, when the EX Raid becomes a permanent part of the game?
Our best advice is to continue to be active in gym raids, big and small. You won’t know ahead of time where an EX Raid might be scheduled so participating in as many raids as possible, at different locations helps make your odds better of receiving an invitation from Niantic.

Overall, the EX Raid was an exciting experience. We were happy to have this chance to capture Mewtwo and see so many players (including ourselves) add him to their Pokédex.

We also greatly appreciate Niantic for creating a way to reward those who’ve been faithful and active Pokémon Go players, through this special type of event.