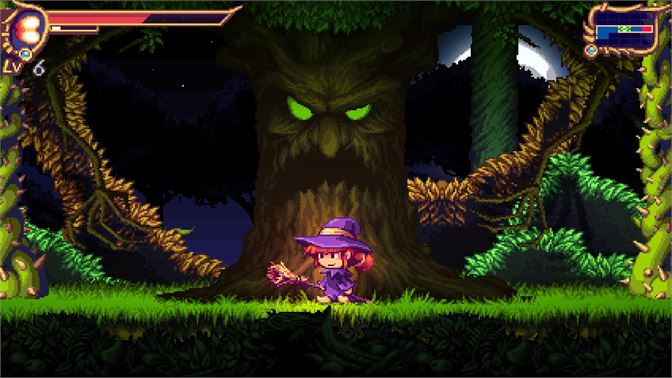 Take on the role of an adorable witch, survive zombie hordes, learn spell casting, become an alchemy expert, dash through a constant barrage of monsters, and much more, with these 13 frighteningly fun titles for PC, consoles, and mobile devices.

Developer: Last Dimension/Andrew Bado
Genre: Metroidvania/Point & Click
Synopsis:
After being charged for a crime she didn’t commit, a haphazard witch in training goes on an adventure to complete a nearly impossible task in order to avoid expulsion from school.
Platform(s): Steam, XB1, PS4

Developer: Borealys Games
Genre: Fantasy RPG/Puzzle
Synopsis:
Follow the story of Zia, a young girl with special abilities who must teach herself in the ways of the mage, in a world where magic has been banned.
Platform(s): Switch, PS4, XB1, PC

Developer: Pupuya Games
Genre: Shooter/Dungeon-Crawler
Synopsis:
Use magic and melee while exploring the depths of ancient, unknown castles as Nobeta, a young witch trying to solve the mystery of her own life.
Platform: Steam

Developer: Toge Productions
Genre: RTS/Card Game
Synopsis:
Use your tactical smarts to create an unstoppable army and become the greatest of the Necromancers in this humorous, micro-RTS/deck building title, from the creators of Coffee Talk & the Infectonator series.
Platform(s): Steam, Humble Store

Developer: Nicolas Meyssonnier
Genre: Platformer
Synopsis:
Take on the role of the mythical Pumpkin Lord and help evil destroy all that is good in this 3D platformer, inspired graphically by PS2 games, which offers puzzles, real-time battles, and a variety of experiences with each level.
Platform(s): Switch, PS4, XB1, PC