Top Posts
Slice of Life, Visual Novel, I’m Oh So...
Craft, Build, and Explore with Relaxing, Open World...
Hidden Object, Puzzle Adventure, Darkarta: A Broken Heart’s...
Try a Free Demo of Murder Mystery, Visual...
What You Need to Know About Mega Evolutions...
A List of Physical, Collector Editions for Titles...
Set Sail on an Incredible, Zelda-esque Adventure When...
First 4 Figures Opens Pre-Orders for The Legend...
Our Interview with Tag of Joy About Point...
Our Interview with Cyrille Bonard About His Lively,...
Our Interview with Noema Games About Point &...
Our Interview with Marina Sciberras from Cowleyfornia Studios...
Our Interview with William Kruger from Silvernode Studios...
Our Interview with Jacob Sporrong About His Visual...
Tune in for a Season of Live News...
Pathea Games Announces Puzzle Adventurer, Ever Forward, for...
Reshiram, Zekrom, & Kyurem Come to Tier 5...
Suit up for Action with This Line of...
EMMA: Lost in Memories Journeys to Consoles
25 Indie Games We Can’t Wait to Play
Destroy All Humans! Announced for Physical Release on...
Spike Chunsoft Announces the Danganronpa Trilogy for Mobile...
Celebrate the Return of Final Fantasy VII with...
Our Top 10 Ways to Use an Elite...
Cat Quest “Pawsome Pack” Coming July 31st for...
Begin Your “Journey” on Steam, June 11th
Several Exciting Demos You Can Download for Free...
Rhythm, Action Adventure, Giraffe & Annika Travels to...
“Geek Out” Your Christmas Tree with These Cool...
Our Interview with Ayu Sakata, Writer & Production...
First 4 Figures Announces an Official Facebook Page...
Sport, Showcase, & Embrace the Latest Merchandise from...
Story of Seasons: Friends of Mineral Town is...
Our Interview with Andy Mitchell About His Upcoming...
Harvest Moon: Mad Dash Comes to Mobile Devices
Our Interview with Kristi Ramot & Dagmar Blommaert...
La-Mulana I & II Venture to Consoles
Melee Brawler, Drill Man Rumble, Comes to Steam...
Monster Hunter: World The Official Complete Works Releases...
Infuse Studio’s Breathtaking Exploration Game, Spirit of the...
Our Interview with Missing Game Studio About Their...
Explore Ruins & Hunt for Artifacts When Adam’s...
Our Interview with Lantern Studio’s Art Director, Beidi...
Luigi’s Mansion 3 Multiplayer Pack Part 1 Has...
NIS America Announces 3 Big Additions to Their...
Our Interview with Baseline Games About Developing the...
Indie Publisher, Ratalaika Games Announces What’s Next in...
Play Asia Opens Physical Pre-Orders for Twin Breaker:...
Multiplayer Races to Mario Kart Tour March 8th
A Free Demo of Final Fantasy VII Remake...
Adorable 3D Platformer, Lumote, Releases on Steam
Funko POP! Announces 9 New Additions to Their...
Action RPG, Sparklite, from NC Developers, Red Blue...
Wunderling, a Mario-esque Platformer with a Twist, Releases...
Our Interview with Avery Howell from Malheur Games...
Our Interview with Journey Bound Games About Their...
Langrisser I & II Demo Lands on the...
A Free Demo of Pokémon Mystery Dungeon: Rescue...
“Marvel’s Spider-Man Script Book” Swings Into Bookstores This...
Our Interview with Garrick Campsey About His Unique...
Square Enix Announces a Kingdom Hearts All-in-1 Package...
Apply Now for Full-Time Openings & Summer Internships...
Get Ready to “Wall Jump” with Family &...
First Person, Sci-Fi Puzzler, The Turing Test, Launches...
A “How To” For Defeating Landorus
Mobile Title, Dragon Quest of the Stars, Releases...
Our Interview with Jared Barr from Thetau Games...
Upcoming Toy, Game, & Comic Book Conventions You...
Nintendo Announces an Animal Crossing: New Horizons Switch...
Humorous, Action RPG Kofi Quest: Alpha MOD Ventures...
Mega Man Blasts into Action in the Latest...
Try Out the Free Demo of Yooka-Laylee &...
Capcom Announces What’s Next for Monster Hunter World:...
Satisfy Your Hunger For Nostalgia with a BurgerTime...
Interview with Emma Ramsay & Andy Yong, the...
Our Interview with Carlo Orlandi, Co-Developer of the...
An Interview with Developer Dimitri Adoniou About His...
The North Wilkesboro Speedway is Coming to iRacing
A “How To” for Defeating Team GO Rocket...
Our Interview with Chris Otey, Lead Designer for...
A Fast & Charge TM Guide for the...
Minecraft Earth Hits Mobile Devices Later This Year,...
Super Mario Maker 2 is Coming to the...
Konami Announces a Castlevania Anniversary Collection for PC...
Mark Backler from Sketchbook Games Talks About His...
Azelf Enters Tier 5 Raids November 24th
Warm Up with a Cool Sweater from Merchoid
Terrakion, Cobalion, and Virizion Return to Tier 5...
Home Features Nikita Kazachkov, One of the Creative Minds at ArtVostok, Gives Us a Sneak Peek at Her Company’s Furrily Fun New Racing Game, Meow Motors
FeaturesGameInterviews

Nikita Kazachkov, One of the Creative Minds at ArtVostok, Gives Us a Sneak Peek at Her Company’s Furrily Fun New Racing Game, Meow Motors 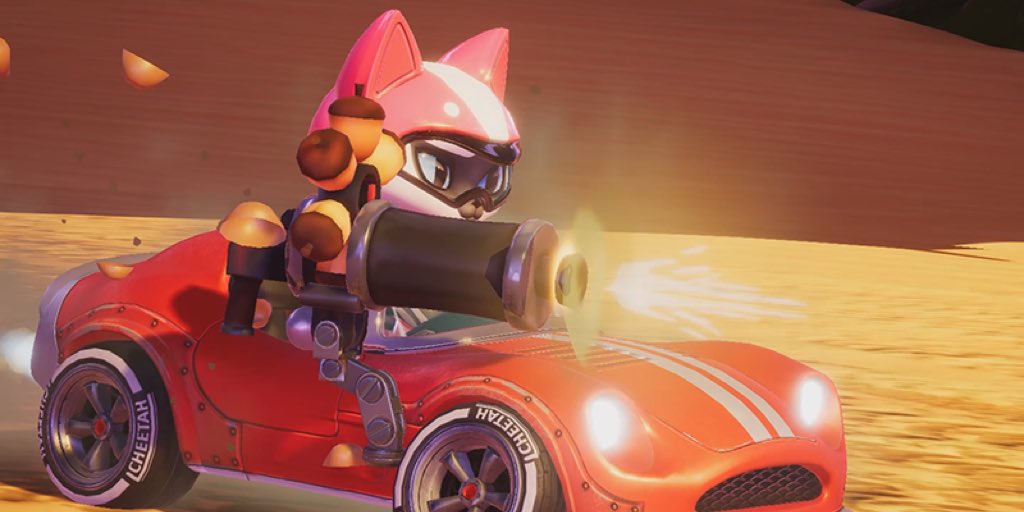 I stumbled upon developer, ArtVostok, on Instagram and was immediately intrigued by their new game, Meow Motors. It’s an action packed, light hearted, cat filled racing game where players can fight off the competition with cool weaponry such as a shark bazooka, in order to make it to the finish line first.

The game looks so well made and terrifically fun, that I decided to find out more about it. Here’s a peek behind the scenes of this furrily fantastic new indie, thanks to one of the creative minds behind Meow Motors, Nikita Kazachkov.

Tell us about your company, ArtVostok, and your background in the gaming industry.
The company was created in Siberia in 2006. At first, we did outsourcing in the gaming industry. We worked with dozens of big clients. Among them are Heroes of Might and Magic 5, War Thunder, and Prime World. But, we really wanted to create something by ourselves. Meow Motors is our first independent game in which we tried to compile all the experiences that we had gained during our work.

Aside from gaming projects, we also do work on cartoons. That’s why our characters are so vibrant.

Give us a brief description of Meow Motors.
It’s a go-Kart racing game where kitties are the main characters. They each have their own cool and unique personality, which makes the game a huge amount of fun to play.

What was the inspiration behind the game? Why cats? Why racing?
It all began in winter 2015 when our boss came in with the words, “Enough of modelling and texturing your polygons! It’s about time to make something grand!”

The boss enjoyed designing cars, so in the course of the next two years, our gang gradually fell in love with cars. You could say that there’s nothing fancy in a racing game, but when a bunch of cute cats are driving fancy cars… that’s a horse of a different color.

So yes, racing, ’cause our boss likes it, cats, ’cause they’re cats. Pretty simple.

How many characters are in the game? Do they have different strengths/weaknesses? Are they customizable?
There are 10 characters in the game. They have only strengths, but unique ones. So we wanted to bring a bit of tactics into the game and make players choose, not only based on the likeability of a certain character, but also based on their strengths. But as we already see, players mostly choose certain cats, ‘cause they like them. Characters are not customizable, at least not at the moment.

How many tracks can we race on? What types of challenges will they present? What are the differences in circle races, drifts, and strike modes?
There are 20 tracks available, that gradually get harder, due to mines and various barriers and obstacles. Circle races are just simple races where you have to be the first at the finish line. In drift mode you play alone and have to earn as many points for drifting as possible. Strike is a mode where you have to destroy your enemies. In order to win it, you need to destroy more vehicles than anybody else.

Tell us about power-ups.
Every bonus you get on a track is what we call a power-up. Driving a car you can see the power-ups in front of you, so you can choose in advance which one you need. These items can be a gun, repair stuff, or defensive gear.

There are 10 awesome power-ups. But, you don’t open them all at once. They start to become available after completing levels. The coolest, in my opinion, are the peanut gun and the shark bazooka. They look awesome, authentic and super-cartoonish.

You mention on Twitter that vehicles will need to be repaired after incurring damage in a race. Can you tell us how the damage system will work? How will players need to go about getting their cars repaired?
Your car gets damaged when you smash into barriers, enemies and everything else. It also happens when your enemies fire weapons at you. In this case, your car starts slowing down and moving slower than your competition. In order to overcome this obstacle, you’ll need to get the repair power-ups on the track. But, this shouldn’t be too hard as there’s a pretty good amount to find.

Can you tell us about the single player campaign?
The single player campaign is pretty simple. You pass levels, open up new characters and cars, open up power-ups. And, of course, you race on newer and newer tracks. We do have a small storyline, covering a bit of every character. But it’s pretty limited right now and we’d like to add some more to it during the Early Access of the game.

Players will also be able to compete against 3 other players, locally?
Yes, up to 3 players in a local multiplayer. That’s enough for the split-screen view.

What did you enjoy most about developing Meow Motors? What was most challenging?
Finding true and cool concepts for the characters was at the same time the most fun and the most challenging. Do you know how many drawings we went through while finding out the best variants?! It was a total mess!

But all this stuff helped us develop as a team, find the overall vision of the game, and polish the game. Right now, we believe that the graphics look polished and are a strong part of our game. That’s because we worked on this stuff a lot!

How long did it take to develop?
It took us around 2 1/2 years to develop. Pretty intimidating.

Your planned release is sometime in December? Will that include PC, PS4, and XB1?
Yup, right now we’re planning porting the game for PS4 and XB1. But we’re still considering working on other platforms. For example, mobile looks like pretty cool stuff.

Any plans to add Meow Motors to the Nintendo Switch?
Nintendo is, of course, very appealing. We’re thinking of it, but it’s hard to say for sure at the moment.

Any future games/projects in the works?
Meow Motors is our first game and we hope not the last. But, let’s see first how players do or don’t like our game.

A big thanks to Nikita Kazachkov for her time.  We wish ArtVostok the best of success for their new game!

You can find out more about the development of Meow Motors on medium.com.

You can watch several trailers for the game on ArtVostok’s YouTube channel.

Meow Motors is now available on Steam Early Access for $19.99.

Here are a few pictures from the game. 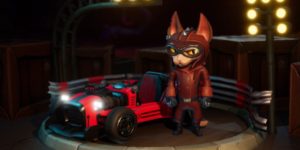 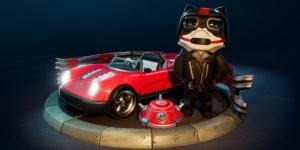 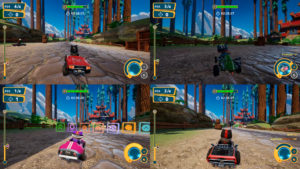 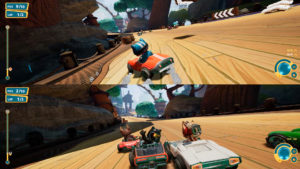 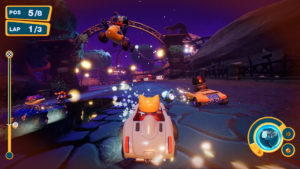 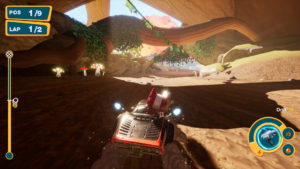 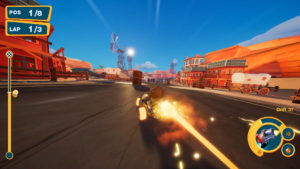 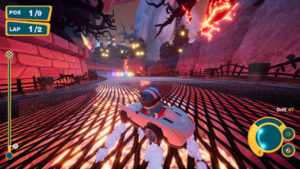 The Awesome Adventures of Captain Spirit is a Free, Standalone Narrative That Will Introduce Players to the World of Life is Strange 2

The 5 Basic Features of Nintendo’s Paid...

Take Your Family on a Virtual Getaway...