Top Posts
Adorable Adventurer, Turnip Boy Commits Tax Evasion, Gets...
Watch an All-Female Cast of Speedrunners During the...
Playdate Pre-Orders are Now Open
Our (Quick) Review of Action Platformer, Effie, from...
Sign-Up to Play the Pre-Alpha of Relaxing Community...
Exciting (Steam) Game Demos You May Want to...
Mythological Metroidvania, Mira: The Legend of the Djinns,...
5 Fun Gift Ideas for the Pokémon Fan
First 4 Figures Opens Pre-Orders for 2 New...
Decorate Your Tree with These Cool Keepsake Ornaments...
Mark Your Calendar for the Limited Run Games...
June: Tales from Cyberspace Seeks Support on Kickstarter
Our 10 Favorite Game Trailers of E3 2021
Arcade 1UP Announces 4 Exciting New Cabinets Perfect...
Eastasiasoft Announces 10 Titles for Summer Release
11 Eye-Catching Indie Games Coming to Kickstarter
Cool Toy, Game, & Comic Cons Happening in...
10 Games You Can Support on Kickstarter Right...
Tune in for E3, Summer Game Fest, and...
Slice of Life, Visual Novel, I’m Oh So...
Craft, Build, and Explore with Relaxing, Open World...
Hidden Object, Puzzle Adventure, Darkarta: A Broken Heart’s...
Try a Free Demo of Murder Mystery, Visual...
What You Need to Know About Mega Evolutions...
A List of Physical, Collector Editions for Titles...
Set Sail on an Incredible, Zelda-esque Adventure When...
First 4 Figures Opens Pre-Orders for The Legend...
Our Interview with Tag of Joy About Point...
Our Interview with Cyrille Bonard About His Lively,...
Our Interview with Noema Games About Point &...
Our Interview with Marina Sciberras from Cowleyfornia Studios...
Our Interview with William Kruger from Silvernode Studios...
Our Interview with Jacob Sporrong About His Visual...
Tune in for a Season of Live News...
Pathea Games Announces Puzzle Adventurer, Ever Forward, for...
Reshiram, Zekrom, & Kyurem Come to Tier 5...
Suit up for Action with This Line of...
EMMA: Lost in Memories Journeys to Consoles
25 Indie Games We Can’t Wait to Play
Destroy All Humans! Announced for Physical Release on...
Spike Chunsoft Announces the Danganronpa Trilogy for Mobile...
Celebrate the Return of Final Fantasy VII with...
Our Top 10 Ways to Use an Elite...
Cat Quest “Pawsome Pack” Coming July 31st for...
Begin Your “Journey” on Steam, June 11th
Several Exciting Demos You Can Download for Free...
Rhythm, Action Adventure, Giraffe & Annika Travels to...
“Geek Out” Your Christmas Tree with These Cool...
Our Interview with Ayu Sakata, Writer & Production...
First 4 Figures Announces an Official Facebook Page...
Sport, Showcase, & Embrace the Latest Merchandise from...
Story of Seasons: Friends of Mineral Town is...
Our Interview with Andy Mitchell About His Upcoming...
Harvest Moon: Mad Dash Comes to Mobile Devices
Our Interview with Kristi Ramot & Dagmar Blommaert...
La-Mulana I & II Venture to Consoles
Melee Brawler, Drill Man Rumble, Comes to Steam...
Monster Hunter: World The Official Complete Works Releases...
Infuse Studio’s Breathtaking Exploration Game, Spirit of the...
Our Interview with Missing Game Studio About Their...
Explore Ruins & Hunt for Artifacts When Adam’s...
Our Interview with Lantern Studio’s Art Director, Beidi...
Luigi’s Mansion 3 Multiplayer Pack Part 1 Has...
NIS America Announces 3 Big Additions to Their...
Our Interview with Baseline Games About Developing the...
Indie Publisher, Ratalaika Games Announces What’s Next in...
Play Asia Opens Physical Pre-Orders for Twin Breaker:...
Multiplayer Races to Mario Kart Tour March 8th
A Free Demo of Final Fantasy VII Remake...
Adorable 3D Platformer, Lumote, Releases on Steam
Funko POP! Announces 9 New Additions to Their...
Action RPG, Sparklite, from NC Developers, Red Blue...
Wunderling, a Mario-esque Platformer with a Twist, Releases...
Our Interview with Avery Howell from Malheur Games...
Our Interview with Journey Bound Games About Their...
Langrisser I & II Demo Lands on the...
A Free Demo of Pokémon Mystery Dungeon: Rescue...
“Marvel’s Spider-Man Script Book” Swings Into Bookstores This...
Our Interview with Garrick Campsey About His Unique...
Square Enix Announces a Kingdom Hearts All-in-1 Package...
Apply Now for Full-Time Openings & Summer Internships...
Get Ready to “Wall Jump” with Family &...
First Person, Sci-Fi Puzzler, The Turing Test, Launches...
A “How To” For Defeating Landorus
Mobile Title, Dragon Quest of the Stars, Releases...
Our Interview with Jared Barr from Thetau Games...
Upcoming Toy, Game, & Comic Book Conventions You...
Nintendo Announces an Animal Crossing: New Horizons Switch...
Humorous, Action RPG Kofi Quest: Alpha MOD Ventures...
Mega Man Blasts into Action in the Latest...
Try Out the Free Demo of Yooka-Laylee &...
Capcom Announces What’s Next for Monster Hunter World:...
Satisfy Your Hunger For Nostalgia with a BurgerTime...
Interview with Emma Ramsay & Andy Yong, the...
Our Interview with Carlo Orlandi, Co-Developer of the...
An Interview with Developer Dimitri Adoniou About His...
The North Wilkesboro Speedway is Coming to iRacing
A “How To” for Defeating Team GO Rocket...
Our Interview with Chris Otey, Lead Designer for...
A Fast & Charge TM Guide for the...
Minecraft Earth Hits Mobile Devices Later This Year,...
Super Mario Maker 2 is Coming to the...
Konami Announces a Castlevania Anniversary Collection for PC...
Mark Backler from Sketchbook Games Talks About His...
Home 2017 IGN Community Meet-up in LA
2017Event Highlights 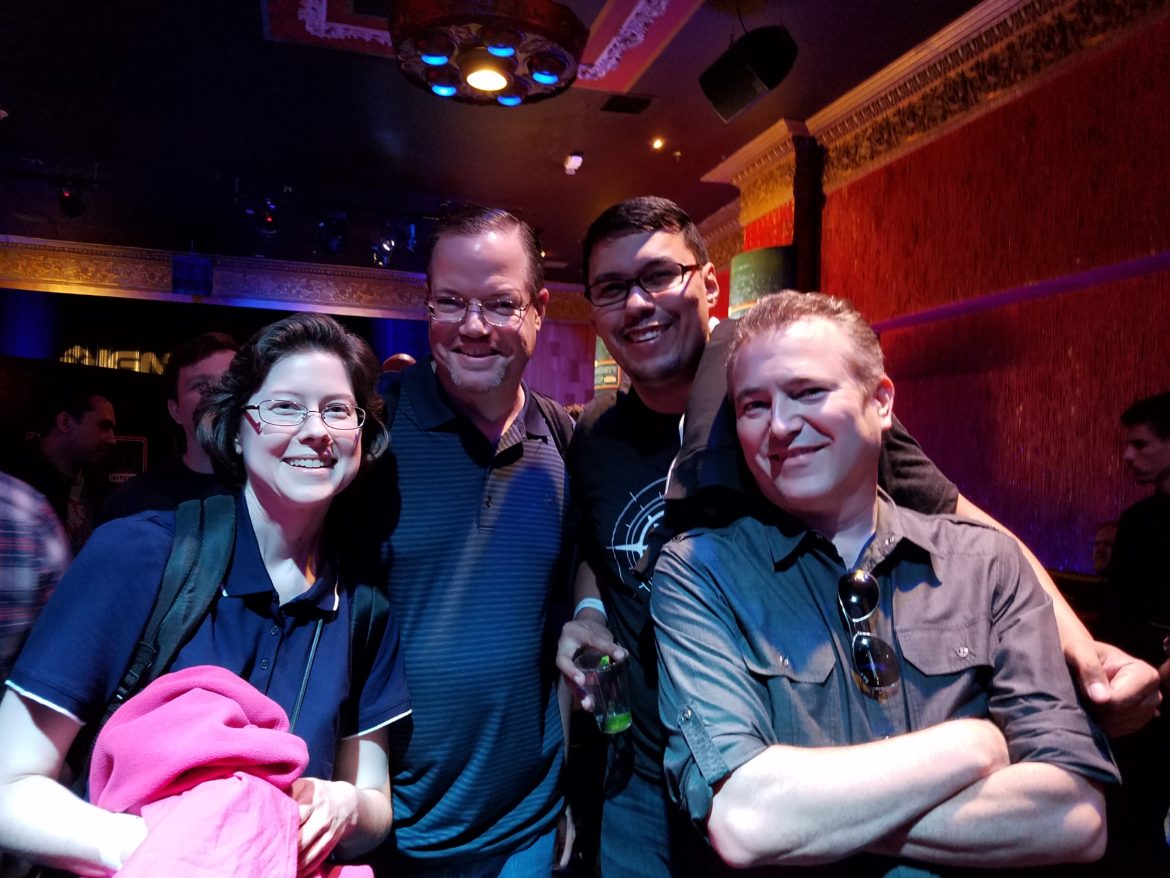 As followers of IGN, we’ve always wanted to attend one of the many meet-ups they do for their fans at their home office in San Francisco. Living in NC (with no other reason to be in CA), this was always an impossible task. Finally, we had our chance to meet the staff when IGN (and Hot Pockets) set-up a community gathering in Los Angeles the Saturday before E3.

The party took place in an obscure little theater on a very quiet and somewhat desolate part of town. The room was an upstairs space just big enough for the crowd to squeeze into. There were dark blue lights, lots of chatter, a small stage, heart thumping music, and some free swag in the form of Hot Pocket t-shirts and plushies. There were also some playable video games, because, come on, IGN knows their fans.

One of the most impressive things about the meet-up was the number of IGN personalities in attendance. We thought there might be 3 or 4 people, but there were at least 10, maybe even more. We were also pleasantly surprised at the genuine attitude of the staff toward their supporters. They weren’t just there for a quick hello or hastily taken picture. Instead, each took the time to have an in-depth conversation and really get to know something about each person they met.

One of the more popular people of the evening was Alanah Pearce. In fact, she was so in demand, that we found ourselves in a competition of sorts with a group of 4 to see who could get to her the fastest. Unfortunately, the group beat us to the punch, sneakily maneuvering two of their party in front of us while the other two grabbed the IGN star’s attention.

Although disappointed with our defeat, we resolved to not give up, stood our ground, and patiently held our “next in line” position. Finally, after what seemed like an eternity, we had our chance to say hello.

We started off with a picture and then went into a conversation about what it’s like to be a female in a male dominated industry. We talked Phoenix Wright, Root Letter, snow, Alanah’s background as a broadcaster and her desire to be an inspiration to young girls who might want to have a career in the game industry. When our conversation came to an end, we offered Ms.Pearce a GameCuddle t-shirt, which she accepted with a smile.

Next on the list of people we wanted to meet was Jose Otero the (now former) head of our favorite IGN podcast; the Nintendo Voice Chat (NVC). Our first reaction at seeing Mr. Otero was shock at how tall he really is. Once the initial shock wore off, our conversing commenced.

Jose started things off by asking us which game we were most excited to see at E3. After we answered, “Super Mario Odyssey,” he proceeded to give us advice on how to achieve our goal of playing the most sought-after game of the show. Next, Mr. Otero inquired about our background and what brought us to the convention. We explained that we were attending as part of the general public this year, but had attended as retailers in the past. We then had opportunity to discuss some of the challenges of being a game store owner and the ups and downs of running your own business.

Lastly, we told Jose how much we love the NVC podcast to which he responded with multiple thanks and humility. It was obvious that he appreciated the support of his fans and that he understood, without them, he could not do what he loves to do.

Right after speaking to Jose, we had the honor of meeting Peer Schneider, one of IGN’s founders and current General Manager. Mr. Schneider is very much the business minded professional that you would imagine him to be. He’s also an extremely detail oriented and observant man who, while talking to us, took brief moments here and there to make sure his employees (who were working behind the scenes at the event) had what they needed.

We talked extensively about the general public attending E3, companies who have decided to no longer participate in the conference, the expense for a company to do an all-out set-up at the convention, and some of the things that the ESA could possibly do differently with E3 in the future.

Last but certainly not least, we met Naomi Kyle, who is as lovely in real life as she is on camera. She was the one person who constantly circled the room to make sure that everyone who was in attendance had a chance to talk to her and get a photo. She allowed us to take 2 pictures since the first one didn’t come out as hoped. She also accepted a GameCuddle t-shirt at the end of our time together and was genuinely excited about the fact that she was the recipient of some free swag.

As we exited the event, we noticed Peer, Jose and a few others were gathered talking to some folks outdoors. As we passed by, Peer observed we were leaving, and said goodbye.

The IGN meet-up was as much fun as we’d imagined it would be. We greatly appreciate Hot Pockets sponsoring the event. We’re also grateful to the IGN staff who took time out of their busy schedules to spend an evening with their fans.

UPDATE:
Jose Otero recently announced he will be leaving IGN for a new opportunity at Nintendo. We wish Mr. Otero the best and will miss his presence on the NVC.