Top Posts
Azelf Enters Tier 5 Raids November 24th
Warm Up with a Cool Sweater from Merchoid
Terrakion, Cobalion, and Virizion Return to Tier 5...
Slice of Life, Visual Novel, I’m Oh So...
10 Kickstarter Campaigns Worth a Look
Craft, Build, and Explore with Relaxing, Open World...
Dive into the Holiday Season with New Merchandise...
13 Frighteningly Fun Indie Titles to Play at...
Hidden Object, Puzzle Adventure, Darkarta: A Broken Heart’s...
Try a Free Demo of Murder Mystery, Visual...
Play-Asia Announces 3 Spookily Spectacular PS Vita Titles...
8 Magically Magnificent Upcoming Titles for PC &...
What You Need to Know About Mega Evolutions...
Take Part in the Free Comic Book Day...
Professor Layton & the Unwound Future Travels to...
Publisher, Limited Run Games Announces What’s Next for...
Natsume Gives Fans a Small Sneak Peek at...
“Worms Rumble” Announced for PC, PS4, & PS5
The Next Update & Events Coming to Monster...
Overcooked! 2 DLC, Sun’s Out, Buns Out, Releases...
Sony Reveals 9 Titles to Kick Off Their...
A List of Physical, Collector Editions for Titles...
Set Sail on an Incredible, Zelda-esque Adventure When...
First 4 Figures Opens Pre-Orders for The Legend...
Our 10 Favorite Games from the 3-Day Guerrilla...
Crash Bandicoot 4: It’s About Time Announced for...
Our Interview with Tag of Joy About Point...
Our Interview with Cyrille Bonard About His Lively,...
Our Interview with Noema Games About Point &...
Our Favorite Games from the Sony PlayStation 5...
Our Interview with Marina Sciberras from Cowleyfornia Studios...
Our Interview with William Kruger from Silvernode Studios...
Exciting Livestreams to Watch in Lieu of This...
Our Interview with Jacob Sporrong About His Visual...
Tune in for a Season of Live News...
Pathea Games Announces Puzzle Adventurer, Ever Forward, for...
Reshiram, Zekrom, & Kyurem Come to Tier 5...
Suit up for Action with This Line of...
E3 Exclusive Funko POP! Figures Will Release May...
EMMA: Lost in Memories Journeys to Consoles
25 Indie Games We Can’t Wait to Play
Destroy All Humans! Announced for Physical Release on...
Spike Chunsoft Announces the Danganronpa Trilogy for Mobile...
Celebrate the Return of Final Fantasy VII with...
Our Top 10 Ways to Use an Elite...
Cat Quest “Pawsome Pack” Coming July 31st for...
Begin Your “Journey” on Steam, June 11th
Several Exciting Demos You Can Download for Free...
Rhythm, Action Adventure, Giraffe & Annika Travels to...
“Geek Out” Your Christmas Tree with These Cool...
Our Interview with Ayu Sakata, Writer & Production...
First 4 Figures Announces an Official Facebook Page...
Sport, Showcase, & Embrace the Latest Merchandise from...
Story of Seasons: Friends of Mineral Town is...
Our Interview with Andy Mitchell About His Upcoming...
Harvest Moon: Mad Dash Comes to Mobile Devices
Our Interview with Kristi Ramot & Dagmar Blommaert...
La-Mulana I & II Venture to Consoles
Melee Brawler, Drill Man Rumble, Comes to Steam...
Monster Hunter: World The Official Complete Works Releases...
Infuse Studio’s Breathtaking Exploration Game, Spirit of the...
Our Interview with Missing Game Studio About Their...
Explore Ruins & Hunt for Artifacts When Adam’s...
Our Interview with Lantern Studio’s Art Director, Beidi...
Luigi’s Mansion 3 Multiplayer Pack Part 1 Has...
NIS America Announces 3 Big Additions to Their...
Our Interview with Baseline Games About Developing the...
Indie Publisher, Ratalaika Games Announces What’s Next in...
Play Asia Opens Physical Pre-Orders for Twin Breaker:...
Multiplayer Races to Mario Kart Tour March 8th
A Free Demo of Final Fantasy VII Remake...
Adorable 3D Platformer, Lumote, Releases on Steam
Funko POP! Announces 9 New Additions to Their...
Action RPG, Sparklite, from NC Developers, Red Blue...
Wunderling, a Mario-esque Platformer with a Twist, Releases...
Our Interview with Avery Howell from Malheur Games...
Our Interview with Journey Bound Games About Their...
Langrisser I & II Demo Lands on the...
A Free Demo of Pokémon Mystery Dungeon: Rescue...
“Marvel’s Spider-Man Script Book” Swings Into Bookstores This...
Our Interview with Garrick Campsey About His Unique...
Square Enix Announces a Kingdom Hearts All-in-1 Package...
Apply Now for Full-Time Openings & Summer Internships...
Get Ready to “Wall Jump” with Family &...
First Person, Sci-Fi Puzzler, The Turing Test, Launches...
A “How To” For Defeating Landorus
Mobile Title, Dragon Quest of the Stars, Releases...
Our Interview with Jared Barr from Thetau Games...
Upcoming Toy, Game, & Comic Book Conventions You...
Nintendo Announces an Animal Crossing: New Horizons Switch...
Humorous, Action RPG Kofi Quest: Alpha MOD Ventures...
Mega Man Blasts into Action in the Latest...
Try Out the Free Demo of Yooka-Laylee &...
Capcom Announces What’s Next for Monster Hunter World:...
Satisfy Your Hunger For Nostalgia with a BurgerTime...
Interview with Emma Ramsay & Andy Yong, the...
Our Interview with Carlo Orlandi, Co-Developer of the...
An Interview with Developer Dimitri Adoniou About His...
The North Wilkesboro Speedway is Coming to iRacing
A “How To” for Defeating Team GO Rocket...
Our Interview with Chris Otey, Lead Designer for...
A Fast & Charge TM Guide for the...
Minecraft Earth Hits Mobile Devices Later This Year,...
Super Mario Maker 2 is Coming to the...
Konami Announces a Castlevania Anniversary Collection for PC...
Mark Backler from Sketchbook Games Talks About His...
Home Event Highlights Our 1st Super FamiCon Experience (Greensboro, NC)
Event Highlights 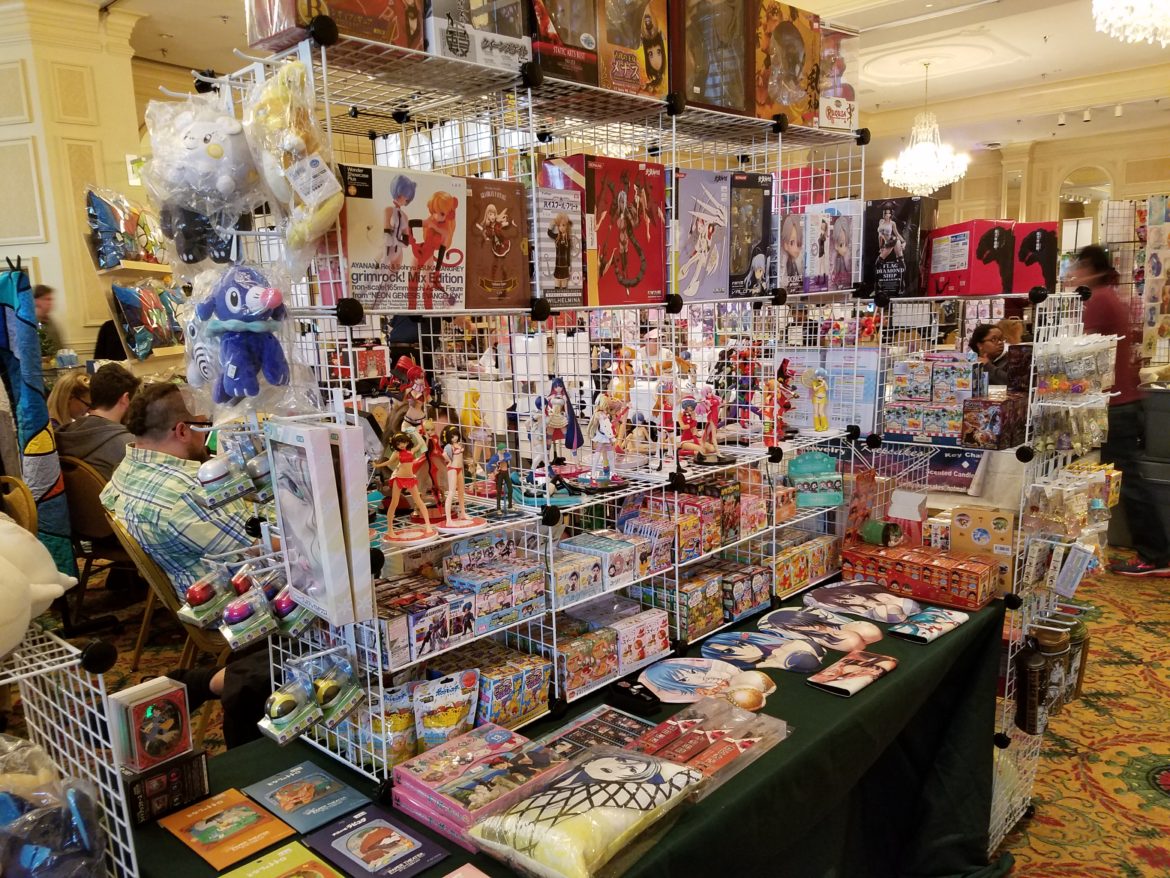 In November, we attended Super FamiCon in Greensboro, NC, for the very first time. This weekend-long event was a wonderful medley of competitive gameplay, inspiring panels, comedy acts, movies, authors, artists, vendors, cosplayers and podcasters. There was truly something for everyone.

The con officially kicked off on Friday night, with a viewing of “The Wizard” accompanied by live commentary from star, Luke Edwards. Unfortunately, we were unable to attend but did catch Mr. Edwards later in the weekend when he took part in a panel.

Speaking of panels, there were more offered here than we’ve ever seen, anywhere before. And, that was just fine with us because listening to special guests speak about their area of expertise is one of our favorite things to do.

The only downside was deciding on which presentations to attend. Once we did, we took two front row seats in Panel Hall A and, over the course of several hours on Saturday and Sunday, took it all in.

“The History of Hyrule”

In an interview conducted by Tobias Mcnabb, Patrick Thorpe from Dark Horse Comics discussed the ins and outs of the publishing world and described what it was like to bring the “Legend of Zelda: Hyrule Historia” to the West.

Ben Moore, CFO of Limited Run Games, talked about why his company exists and the importance of preserving the history of video games through physical copies. (Ben is pictured on the left).

Jeremy Parish, co-host of the Retronauts podcast with special guest, Chris Sims, spoke to Luke Edwards about his role in the 80’s classic, “The Wizard.” They also discussed what Luke’s experiences as an actor in Hollywood have been since.

During the panel, we learned that Mr. Edwards has 2 movies coming up; an acting role in “The Super” with Val Kilmer and a Netflix comedy, “Big Bear” that he helped produce.

Patrick Thorpe (editor-Dark Horse Comics), Ian Flynn (writer-Sonic the Hedgehog), and Adam Bryce Thomas (artist-Sonic the Hedgehog) conducted an eye-opening look at what it takes to work in the world of comic books. Patrick spoke from the POV of a fulltime employed editor who works with independently contracted artists. Ian and Adam explained the fun and sometimes not so fun side of being independent artists and having a “work for hire” career.

By the end of the panel, we learned that there really is no one, clear path to breaking into the comic book industry. But, if someone is open to criticism, willing to hone their craft, and determined to not give up, he/she will most likely succeed.

Jon Irwin, author of the book, Super Mario Bros. 2 (published by Boss Fight Books) led a light-hearted analysis of (arguably) one of the most interesting games in Nintendo’s history. The hour was filled with Mr. Irwin’s personal thoughts about the game, trivia, excerpts from his book, and information he’d gathered in his research, including some interesting insights from Gail Tilden, former Nintendo of America VP of brand management.

Jeremy Parrish from Retronauts and guest host, Chris Sims, returned for another live podcast. This time with the co-owner of Limited Run Games, Josh Fairhurst, to discuss the controversial cult classic, Night Trap. Josh was invited to speak about Night Trap because his company did a physical run of the game for PC and PS4 last year. That, plus his personal experience playing the game gave him a unique perspective about it’s mechanics and concepts.

Although we attended a huge amount of panels on Saturday and Sunday, we did manage to find some time in between to check out the competitions downstairs. To say the atmosphere was intense, would be an understatement.

Tons of players filled the room, competing at levels from bronze to platinum. There was a wide variety of games for competitors to choose from such as Super Smash Bros Melee, Street Fighter 2, TMNT: Tournament Fighters, Super Mario Kart, Tekken 7, Injustice 2, just to name a few.

Here’s a small sampling of what we saw. 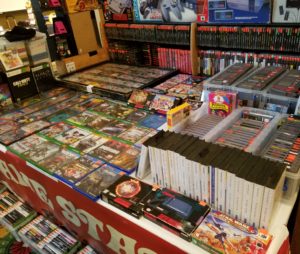 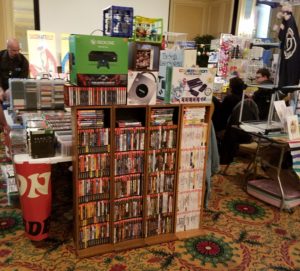 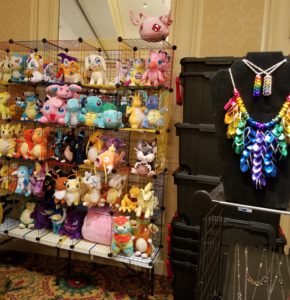 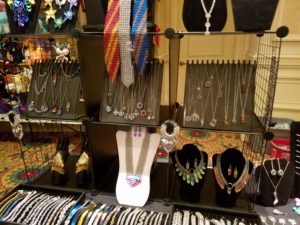 While on the sales floor, we had a chance to snag a PC copy of Night Trap from Limited Run Games, thanks to Ben Moore.

Mr. Moore also let us steal him away for a quick interview. We talked LRG business and how last year’s ESRB rating requirement has greatly impacted their company.

In addition to meeting Ben, we were able to speak to Patrick Thorpe and Jon Irwin.

Mr. Thorpe talked to us about his love of rock climbing, plans he had while visiting NC, and additional background about “Hyrule Historia” that wasn’t discussed in panel. We also talked about the importance of staying healthy, both physically and mentally. Because, with a job like his, you can easily burn out.

Before our time with Patrick came to an end, we requested a picture with him and the gorgeous prototype he brought to the event.

As we started to maneuver away from Patrick’s booth, we took notice of one last thing. 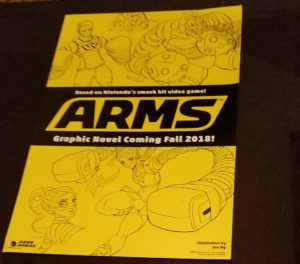 As you can see by the picture above, Dark Horse Comics is working on an ARMS graphic novel that will release this Fall.

Our last meet-up of the event was with Jon Irwin. While at his booth, we purchased a copy of his Super Mario Bros. 2 book and asked for his signature.

We had a wonderful discussion about Pokémon Go, how the opportunity to write his book came about, and his experiences as a full-time teacher.

After 2 non-stop days at Super FamiCon, we were ready to make our way back home.  As we did, we reflected on the terrific time we had at the event and decided there and then that we’d return in 2018.

If you’d like to know more about Super FamiCon, find the event on social media:

Our Introduction to Speedrunning: A Panel with...