Top Posts
Tune in for E3, Summer Game Fest, and...
Cool Toy, Game, & Comic Cons Happening in...
10 Games You Can Support on Kickstarter Right...
Slice of Life, Visual Novel, I’m Oh So...
Craft, Build, and Explore with Relaxing, Open World...
Hidden Object, Puzzle Adventure, Darkarta: A Broken Heart’s...
Try a Free Demo of Murder Mystery, Visual...
What You Need to Know About Mega Evolutions...
A List of Physical, Collector Editions for Titles...
Set Sail on an Incredible, Zelda-esque Adventure When...
First 4 Figures Opens Pre-Orders for The Legend...
Our Interview with Tag of Joy About Point...
Our Interview with Cyrille Bonard About His Lively,...
Our Interview with Noema Games About Point &...
Our Interview with Marina Sciberras from Cowleyfornia Studios...
Our Interview with William Kruger from Silvernode Studios...
Our Interview with Jacob Sporrong About His Visual...
Tune in for a Season of Live News...
Pathea Games Announces Puzzle Adventurer, Ever Forward, for...
Reshiram, Zekrom, & Kyurem Come to Tier 5...
Suit up for Action with This Line of...
EMMA: Lost in Memories Journeys to Consoles
25 Indie Games We Can’t Wait to Play
Destroy All Humans! Announced for Physical Release on...
Spike Chunsoft Announces the Danganronpa Trilogy for Mobile...
Celebrate the Return of Final Fantasy VII with...
Our Top 10 Ways to Use an Elite...
Cat Quest “Pawsome Pack” Coming July 31st for...
Begin Your “Journey” on Steam, June 11th
Several Exciting Demos You Can Download for Free...
Rhythm, Action Adventure, Giraffe & Annika Travels to...
“Geek Out” Your Christmas Tree with These Cool...
Our Interview with Ayu Sakata, Writer & Production...
First 4 Figures Announces an Official Facebook Page...
Sport, Showcase, & Embrace the Latest Merchandise from...
Story of Seasons: Friends of Mineral Town is...
Our Interview with Andy Mitchell About His Upcoming...
Harvest Moon: Mad Dash Comes to Mobile Devices
Our Interview with Kristi Ramot & Dagmar Blommaert...
La-Mulana I & II Venture to Consoles
Melee Brawler, Drill Man Rumble, Comes to Steam...
Monster Hunter: World The Official Complete Works Releases...
Infuse Studio’s Breathtaking Exploration Game, Spirit of the...
Our Interview with Missing Game Studio About Their...
Explore Ruins & Hunt for Artifacts When Adam’s...
Our Interview with Lantern Studio’s Art Director, Beidi...
Luigi’s Mansion 3 Multiplayer Pack Part 1 Has...
NIS America Announces 3 Big Additions to Their...
Our Interview with Baseline Games About Developing the...
Indie Publisher, Ratalaika Games Announces What’s Next in...
Play Asia Opens Physical Pre-Orders for Twin Breaker:...
Multiplayer Races to Mario Kart Tour March 8th
A Free Demo of Final Fantasy VII Remake...
Adorable 3D Platformer, Lumote, Releases on Steam
Funko POP! Announces 9 New Additions to Their...
Action RPG, Sparklite, from NC Developers, Red Blue...
Wunderling, a Mario-esque Platformer with a Twist, Releases...
Our Interview with Avery Howell from Malheur Games...
Our Interview with Journey Bound Games About Their...
Langrisser I & II Demo Lands on the...
A Free Demo of Pokémon Mystery Dungeon: Rescue...
“Marvel’s Spider-Man Script Book” Swings Into Bookstores This...
Our Interview with Garrick Campsey About His Unique...
Square Enix Announces a Kingdom Hearts All-in-1 Package...
Apply Now for Full-Time Openings & Summer Internships...
Get Ready to “Wall Jump” with Family &...
First Person, Sci-Fi Puzzler, The Turing Test, Launches...
A “How To” For Defeating Landorus
Mobile Title, Dragon Quest of the Stars, Releases...
Our Interview with Jared Barr from Thetau Games...
Upcoming Toy, Game, & Comic Book Conventions You...
Nintendo Announces an Animal Crossing: New Horizons Switch...
Humorous, Action RPG Kofi Quest: Alpha MOD Ventures...
Mega Man Blasts into Action in the Latest...
Try Out the Free Demo of Yooka-Laylee &...
Capcom Announces What’s Next for Monster Hunter World:...
Satisfy Your Hunger For Nostalgia with a BurgerTime...
Interview with Emma Ramsay & Andy Yong, the...
Our Interview with Carlo Orlandi, Co-Developer of the...
An Interview with Developer Dimitri Adoniou About His...
The North Wilkesboro Speedway is Coming to iRacing
A “How To” for Defeating Team GO Rocket...
Our Interview with Chris Otey, Lead Designer for...
A Fast & Charge TM Guide for the...
Minecraft Earth Hits Mobile Devices Later This Year,...
Super Mario Maker 2 is Coming to the...
Konami Announces a Castlevania Anniversary Collection for PC...
Mark Backler from Sketchbook Games Talks About His...
Azelf Enters Tier 5 Raids November 24th
Home Features Gaming Not Allowed!
Features 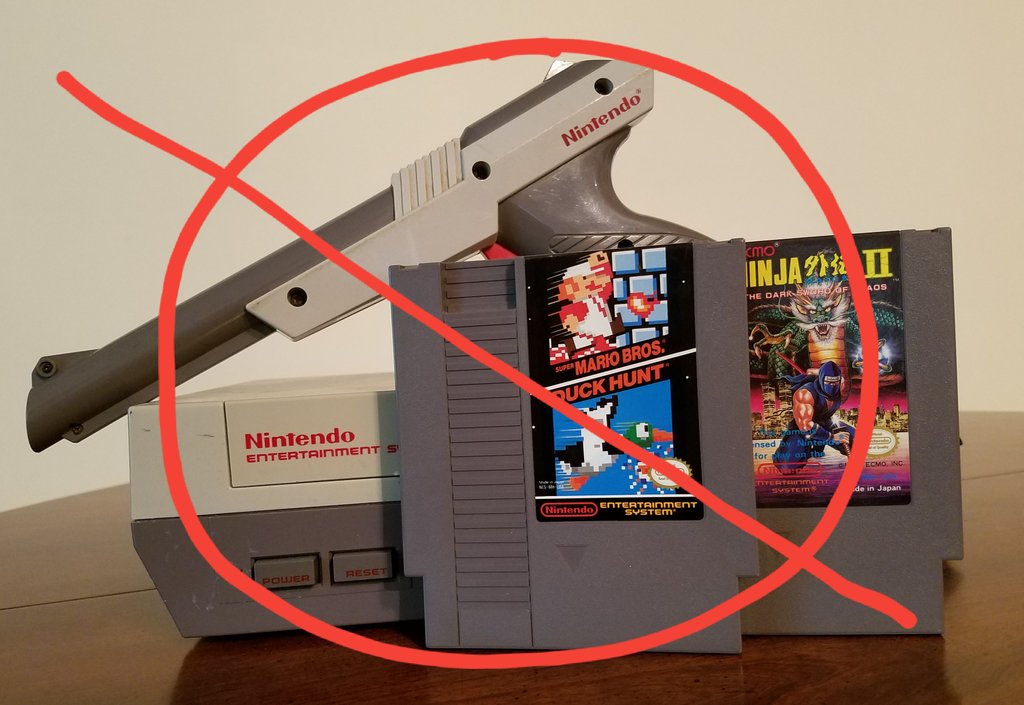 When I was young, I was not a rebellious kid at heart. I made good grades, did my homework and chores, helped my parents with anything they asked. I never ran with the wrong crowd, disrupted class, or spent any time in the principal’s office. I was the model student and son, except in one aspect.

I was a gamer. I loved to play games. My parents were against it. And, even though I loved my parents, and still do, my love of gaming caused me to rebel against their wishes. We’ve all had those moments in life when we didn’t do what we were told. This was my moment. And my life is all the better for it.

My obsession started when I first laid eyes on the new Nintendo Entertainment System in the living room of one of my neighborhood friends. She had received it as a Christmas gift from her family. It was a thing of beauty. I think I literally heard it call my name.

She had two games; Duck Hunt and Super Mario Bros. We usually played after school with two other friends. We’d take turns, each person playing until they died. When you died, you passed the controller to the next person in line who took up from where you left off. Unfortunately, we didn’t usually get far enough in the game to earn 100 coins or a 1UP mushroom so after the 4th person died, game over. We had to start back from the beginning.

I also found outlets for my gaming needs at my cousin’s house as well as the home of my very best friend, Jeremy. My parents would allow me to stay overnight at Jeremy’s house. We did a lot of things together; fishing, hunting, and sports. But, my favorite pastime, of course, was playing on his NES. He and I would play until very late at night. Sometimes, he’d even go to bed and I’d stay up playing on my own, denying myself of sleep.

Finally, the moment came when I decided I wanted more. I needed to have my own NES system. I asked my parents. They said no. I begged and pleaded. I tried every bribery and negotiation tactic I could think of including promising I’d spend twice the amount of time studying/ reading than I did gaming. I also promised to pay for the system and games myself. But, nothing worked. I couldn’t persuade them. The dream was dead. Or, was it?

After evaluating the situation, I made a decision. I’d buy the system myself and my parents wouldn’t have to know. Now, I just needed the money to put my plan into action.

I worked harder than I’d ever worked before. I mowed lawns, sold Christmas trees, worked at a grocery store as a bag boy/stocker, and even found lost golf balls on a nearby golf course which I cleaned and resold to players. Finally, after several months of working and saving, I had the money for my NES.

Instead of buying it new, I decided to make my money go as far as possible and purchased my first system from a pawn shop. I also purchased the two games I’d always wanted to play all the way through; Duck Hunt and Super Mario Bros.

The hardest part of the plan (besides earning the money) was finding the perfect hiding place. Being a music fan, I had a nice stereo system with two huge, wooden box speakers (this was the 90’s). The back panel on each slid in and out for easy access. That was my hiding place. It was perfect.

I chose my times to play very carefully, always doing it when my parents weren’t at home. I played when they were at work, out running errands, or going to events that I conveniently got out of by faking sickness or suddenly needing to “study” for a test.

Over a span of 6 months, I acquired 40 games. That was great for variety’s sake, but not so great in terms of trying to hide them.

That’s where my friend Jeremy came into play, once again. He allowed me to stash my games inside a box in his room. I chose to only take one game home at a time, hoping that if ever caught, the other 39 would not be confiscated.

The plan was working out well until one day, I was so engrossed in playing Ninja Gaiden II, that I didn’t hear my parents’ car in the driveway when they arrived home.

They looked into the window of my bedroom as they walked toward the house and saw their son doing what they had told him he could not do.

I was caught. The dream was dead once again. The punishment came down. I was grounded for a month and my system and game were confiscated.

“But, what about the other 39 games?” you might ask. Well, Jeremy allowed one of his friends to borrow my box of games, who later refused to return them. I not only had my system taken away, a month in solitary confinement, but lost all of the games I’d worked so hard to obtain. The punishment could not have been worse.

So, what life lessons did I learn from all of this?
1. Don’t disobey your parents. You will eventually be found out/ punished.
2. Choose your friends wisely. If they’re willing to help you hide your games from your parents, they’re probably worth keeping.
3. Don’t hold your friends responsible for the acts of others who betray you.
4. Pawn shops can save you money.
5. Work hard and never give up on your dreams, even if your family doesn’t approve. (Just don’t go against their wishes while you’re still living in their house).

So, would I still have a huge passion for the gaming industry today if my parents had let me play when I was younger? I don’t know. I’d like to think so.

What I do know is that being a gamer has made my life even more amazing than it would’ve been otherwise. I’ve felt the exhilaration of saving the princess from the claws of Bowser. I was filled with pride when I solved the puzzles in Professor Layton. I was enchanted as I explored the world of Hyrule riding on the back of Epona.

Gaming is something I can share with my wife, friends and family. I even had the opportunity (with my wife) to run an independent game/ movie business for several years. On top of all of this, I’ve met some incredibly cool people while standing in line for systems, game releases, and those ever elusive amiibo figures.

I’m thankful for my parents. I’m happy they cared enough about me to set rules, even the ones I didn’t like. I’m also thankful to now be an adult who can make his own decisions. And, my decision is to game on.

Underwater Explorer, ABZU, will Dive onto the...