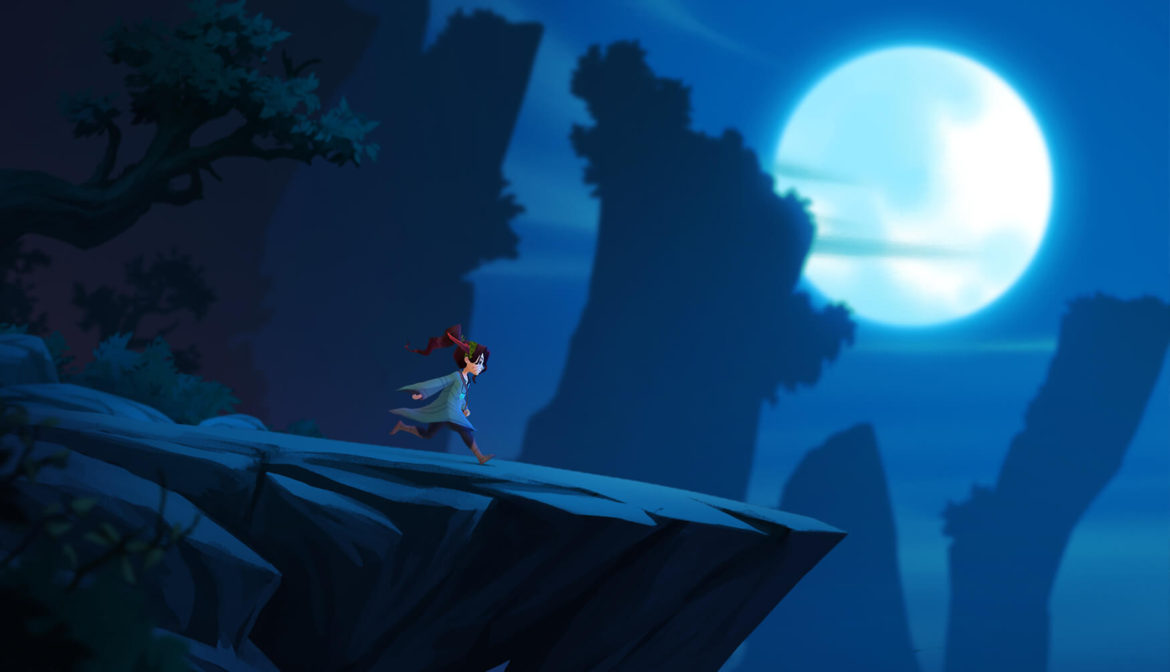 You’ve probably heard the narrative before where a AAA developer decides to make the transition to the indie side of the game business, to create something of his/her own. Of course, the story isn’t as simple as it sounds as it always involves risk, new challenges, and a LOT of hard work.

Mr. Backler, founder of Sketchbook Games, is one of those stories. He’s an industry veteran who, after two years of working in his spare time on his own idea and showcasing it at several events, received enough funding to warrant quitting his day job and pursuing production on his own title, full time.

After recently discovering Mark’s intriguing puzzler/platformer, entitled Lost Words: Beyond the Page, we decided to ask him all about it, including the origin of the game’s unique concept, the challenges that have arisen during development, and how expert writer, Rhianna Pratchett became a part of the project.

This is what Mr. Backler had to say.

Tell us about yourself & your company, Sketchbook Games.
I’ve worked as a designer in the game industry for 11 years at companies such as EA, Lionhead and Sony, on games including Harry Potter and the Order of the Phoenix and Fable 2. I founded Sketchbook Games two years ago, which is based at the Colchester Games Hub at Essex University although most of the team works remotely.

Your company is currently working on its first title; Lost Words: Beyond the Page. Tell us about the game and the inspiration behind its unique concept.
Lost Words is an atmospheric puzzle game that is set inside a diary and sees players using words as platforms for their character. It features a story by renowned games writer Rhianna Pratchett.

The game was originally meant to be a bit like Tetris but with words instead of blocks and also with the addition of a playable character. Before I had physics working on the words I ran the game to test it and the character dropped down and landed on the words, which just hung there. I thought, “That’s really cool!” and decided to do that instead and it grew from there.

Tell us why you decided to make the transition from AAA titles to independent developer.
I started making Lost Words as part of the Ludum Dare game jam and continued working on it on and off in my spare time for a couple of years. After showing it at several events, I was offered some funding to develop it full time. I ended up quitting my job as a lead game designer at Marmalade in order to start Sketchbook Games.

In general, how has the transition been so far? Biggest challenges? Most rewarding moments?
The most rewarding moments are seeing people playing and enjoying the game at shows, as well as them being emotionally moved by it and some of the lovely comments we get.

It has also picked up several awards so far, which has been a really great recognition of all the hard work that the team and I have put into it.

The biggest challenge has been securing enough investment to finish the game, which we managed to do through a variety of means such as working with The Wellcome Trust, Creative England, Games Co London, the UK Games Fund, and finally through securing a publisher in Modus Games.

Can you tell us about some of the choices that players will make in the game and how much this will affect what happens?
Choices in games can be something of a poisoned chalice because I, and players in general, love them but they are very difficult to make and, due to their very nature, they split your audience and then you’re making content that only a certain percentage of your players will see.

This issue gets multiplied with each branching choice you have. Even on Fable 2 this was a consideration for us and that was a AAA game. So, for smaller developers, especially ones aiming for high visual fidelity, this can really stretch your resources.

We’ve tried to be smart with the choices that we have and aim to ensure they feel as meaningful as possible but without requiring us to make three or four times the amount of content, as making games is difficult enough, at the best of times. We have things like choosing the look of the Estoria character, her name, and then the framing of different events that happen in the story.

How did you approach designing the puzzles for the game?
When I was working in London, I would sketch out ideas on a notepad while I was on the tube, get inspiration from different poster adverts or sometimes I would just play around in Unity. Then I would test things out on people and see what worked and what didn’t, and people made lots of great suggestions, which often worked out really well.

There’s a distinct difference in look and feel between the diary pages of the main protagonist and the imaginary world of Estoria. Can you tell us how you went about creating these two vastly different worlds that intertwine?
The diary is a stylized version of the real world that we wanted to have a nice watercolor look and feel to it, whereas the world of Estoria is a fantasy land that the game’s protagonist, Izzy, has conjured up from her imagination. As you progress through the diary you get a few glimpses into where Izzy gets some of her inspirations from.

Well known writer, Rhianna Pratchett is penning the game’s story. How did she become a part of your project?
She was a judge at the Space Ape Great British Winter Game Jam which some friends and I were lucky enough to win. Rhianna really liked our game Elven Icesolation and played it so much during the judging that one of the other judges, former EA Executive Vice President David Gardner, didn’t get a chance to have a go.

I contacted her afterwards. The people who had offered us the original funding reached out to her too. We all met up for lunch and she really liked the game and I was thrilled to find out that she wanted to be involved.

Can you tell us about the collaborative process you’ve gone through with Ms. Pratchett to develop the script?
We have met up in person quite a few times and have had lots of Skype calls. The process has kind of evolved over the course of the project and the diary sections were done a bit differently to the Estoria bits.

Essentially though we have a discussion about what’s needed and then Rhianna writes up a script. We do an edit of that and Rhianna does a pass over the final thing.

The game is due out next year. Do you have a goal yet on what time of year that will be?
We have a goal of Q2 2019 but we’ve not set an exact date yet.

Do you have an idea of price point yet?
I’m thinking around £15 ($19 US) but we haven’t finalized that so far.

The game will be coming to PS4, Xbox One, Switch & Steam. Will there be an Early Access phase for the game on Steam? Will you have any type of online demo for consoles prior to the game’s release?
I think that early access works best for genres such as roguelikes and strategy games because they are designed to be replayed numerous times. If you play a narrative game and it’s buggy or not finished, I feel it spoils the experience.

Thanks so much for your time.
You’re welcome. Thanks for getting in touch.

Be on the lookout for Lost Words: Beyond the Page on PC, Nintendo Switch, PlayStation 4, and Xbox One in 2019. The game can be wishlisted on Steam right now.

Join in the conversation about the game with developers and take a sneak peek behind the scenes on the LWBTP Discord channel.

You can see a trailer for the game, here.

How to Use Stardust to Your Benefit in Pokémon GO!

James Hutt Tells Us About His Simple,...