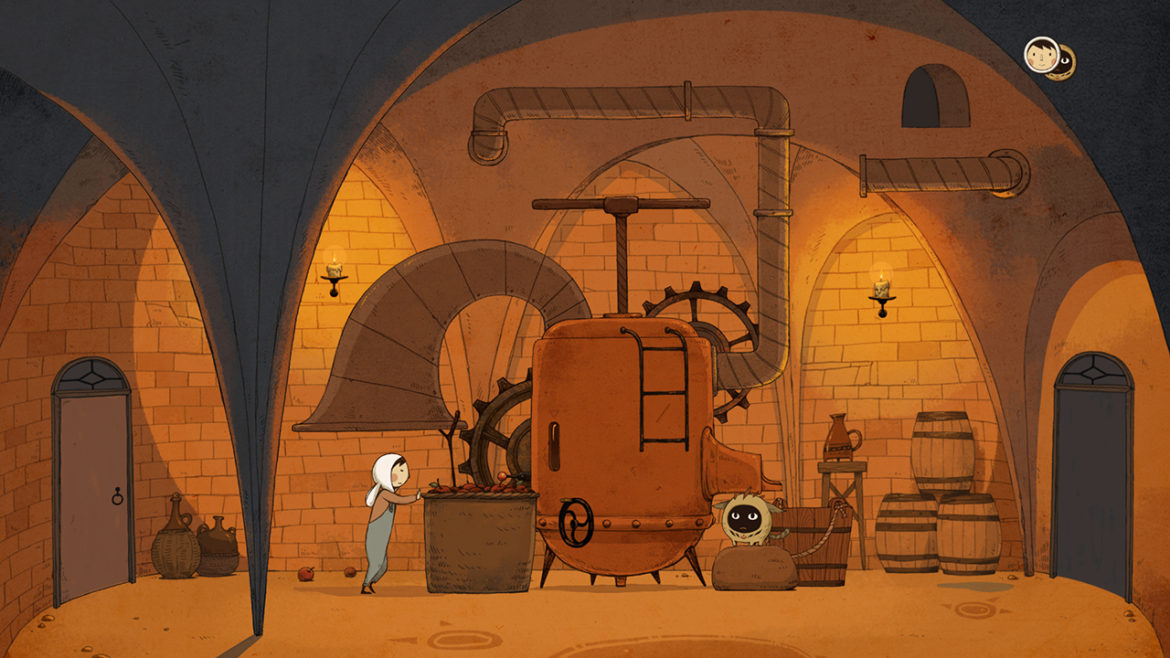 LUNA: The Shadow Dust is a beautiful, hand-animated point and click puzzle adventure about a boy who journeys with a mysterious companion to restore light and balance to an enchanted world. The uniqueness of the adventure, besides its gorgeous hand-drawn world, is that it tells a story using emotions, movement, and music, instead of words.

The title released last month and has received many rave reviews and awards prior to its launch and since.

We recently spoke to the game’s Art Director, Beidi Guo, about some of the challenges and rewards of making this extraordinary game.

Here’s what Ms. Guo had to say.

Tell us about your company, Lantern Studio.
All four members in Lantern Studio are from China. Me (Beidi) and Fox have been good friends since high school in Shanghai.

Around 2014, I was thinking of combining my old student film story into a puzzle game. I showed my sketches to Fox, who liked the ideas. Fox then {brought in} our developer, Wang Guan (who was still working for Ubisoft Shanghai at the time) to do the coding.

Together we made a short demo and showed it to our game developer friends. That’s how we met our 4th member, Susie, our music composer.

The demo received some very positive feedback. We were excited that this idea might be able to become something bigger, so we decided to turn these ideas into a full-length game, and Lantern Studio was born in 2015.

Tell us about your game, LUNA: The Shadow Dust.
LUNA: The Shadow Dust is a point and click adventure, puzzle game in which you control two characters; a boy named Üri, and Layh, the mysterious little creature he meets along the way, {both of which work together} to progress up the floors of an ancient magical tower.

Together with them, players will experience a unique adventure by trying to solve puzzles in each room and restore the balance of light and dark in their world, discovering the real relationship between the two.

It is also a story of finding courage and hope.

Why make a game without words? What was the inspiration behind this decision?
Sometimes the meaning behind textual content might be lost in translation, however, we can all understand emotions by looking at characters’ facial expressions and movement. It is the universal language we all share.

Like two of my favorites, Oscar-winning animated film, ​The House of Small Cubes​ by Kunio Kato, and ​Arrival, a picture-only graphic novel, by Australian artist, Shaun Tan, neither has dialogue, yet I can still be moved by them deeply.

Also, as a small team we have a very limited budget and writing dialogue is not our biggest strength. So, making a game that doesn’t need localization, is definitely a better choice for us.

What are some of the challenges of making a dialogue free game?
We tried our best to animate and edit the cinematic together with the music in order to deliver the exact emotion we’d like our players to feel.

We also designed the game in a way that it leaves individual players enough room to let the imagination run free. Each one will have a very personal understanding of the game. We want people to be able to interpret the mystery of the game in their own way.

We tested our gameplay, UI design, and story with many players to see if the whole idea could be understood. Many details went through a lot of changes, during this time.

How important is music to a game like LUNA?
Music plays a very big part in the game. It works together with the visual very closely to deliver the emotion that we want our players to feel. {This is} crucial for a non-dialogue game like LUNA.

Sometimes the music or the SFX serves as a hint or feedback during puzzle solving. It also sets the mood of each level and cut scene.

LUNA would not be possible without the complement of its music.

The hand animated art style of LUNA is quite beautiful. Can you describe for us the process you go through to hand animate a game?

I start by deciding how long each animation will take by simply imagining it in my head and using a stopwatch to record the movement length.

{Next}, I draw the keyframes of each movement, break it down to a few key poses, then check each pose and total length in the animation software to see if it looks natural.

Once the sketch animation is done, I clean up the rough lines, to make them finer and smoother.  Then, I do the in-between frames.

For example, if the total animation length is 1 second (as we are doing a 12 frames per second animation), I set the 1st frame and 12th frame as the 2 keyframes, then fill in the middle 10 frames.

The last job is coloring. Depending on how detailed I want the animation to be colored, I will {either} do the color all in just one layer or give it as many layers as needed.

Once I have all the lines and colors done, I will play this animation and fine-tune it before I export it into Unity, to be displayed in the game stage.

Tell us about Üri and Layh and how players can use them to help solve puzzles/look at things from different perspectives.
Players can switch between Üri and Layh (his companion) in order to cooperate and solve puzzles. Each of them can also go into different locations within the same level.

Many hints of the puzzle will present themselves in each level. With a bit of extra observation of the surroundings, {players} might just {find} the clues they’re looking for.

LUNA is currently available for PC. Any plans to bring it to other platforms?
Yes. We’re thinking of porting it to the Nintendo Switch next. We’d like to cover as many platforms as possible so iOS and Android mobile platforms will also be considered.

On your website, you mention there might be some LUNA merchandise available in the future. Can you reveal any of the items we can look forward to purchasing? Will there be plushies?
At the moment, we’re already working on the design of LUNA’s artbook, pins, posters and postcards.

Plushies are a bit difficult to produce, but we’re looking for a factory to make them. (It will be so cute, we must make it)!

After working so hard for 4 years to develop LUNA, how does it feel now that the game has finally been released?

It’s been a hard and incredible journey but we learned so much and made a lot of friends along the way. (Thank you to everyone who helped us).

We’ve been really lucky and achieved more than what we could have hoped for.

What’s next for Lantern Studio?
Porting LUNA to Switch is the next task at the moment. We also need to keep fixing bugs and updating the game to make sure it runs smoothly for everyone.

Just start with whatever you’ve got so far.

If you have an idea, write it down. Start with one line, one image or one piece of melody.

Because making a game is a complicated task, it’s impossible to be 100% prepared or have everything thought out. There’s always going to be unpredictable problems coming at you.

An idea in the head is forever an idea. Once you have something solid then you can progress further.

Trying to make a demo is a good idea.

Also, the idea and design of a game changes a LOT during the development. Sometimes solutions come after you’ve {encountered} problems.

Don’t be afraid to throw away your old ideas. You have to leave the comfort zone to realize you have the ability that you don’t even know you have.

Thanks so much for taking the time to answer our questions. We wish you the best with LUNA: The Shadow Dust and look forward to future titles from Lantern Studio.
Thank you very much for talking to us.

LUNA: The Shadow Dust is now available on Steam.

See a trailer and read more about the game on the developer’s website.

Join in the conversation about the game on Discord.

Explore Ruins & Hunt for Artifacts When Adam’s Venture: Origins Releases on the Switch