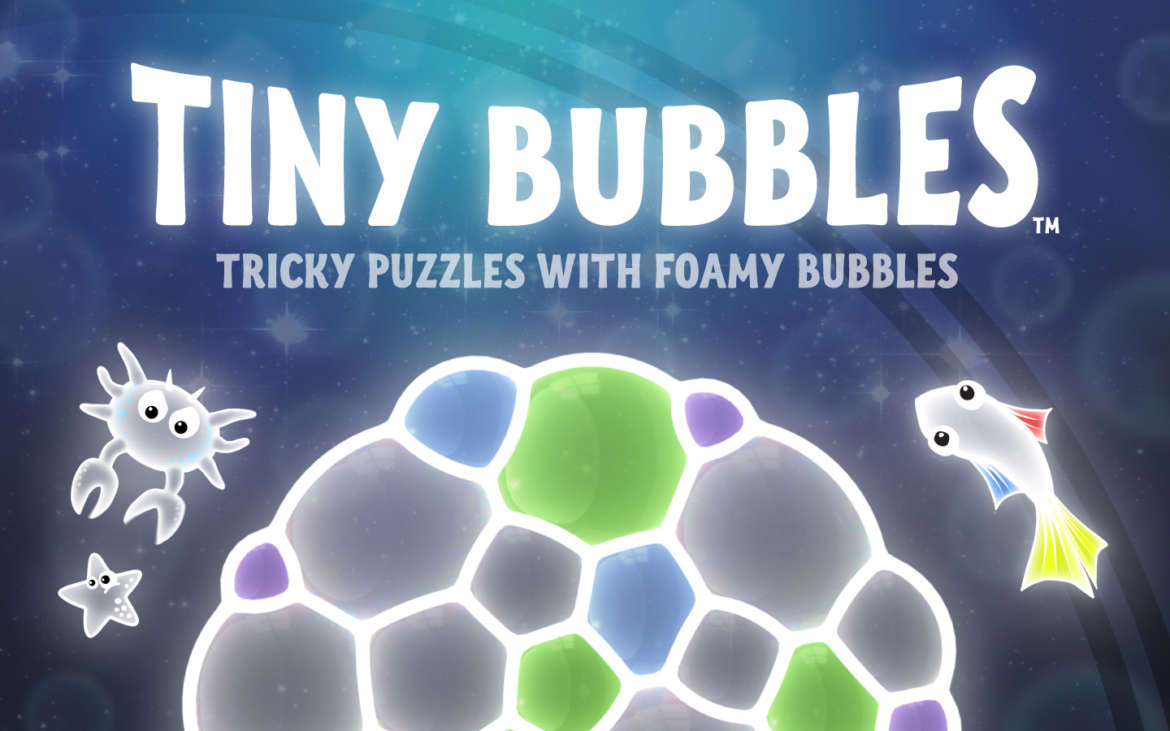 Stu Denman is an industry veteran who’s worked with the likes of Universal Studios and Sony, helping create huge titles such as Lord of the Rings and the Drakan action series.

His newest endeavor, Tiny Bubbles, is a big detour from what he’s done in the past. Rather than working for others and overseeing huge teams of people, he created this game for his company Pine Street Codeworks, doing (almost) all the work himself.

The game is an organic puzzler inspired by the work of his scientist grandfather, based on the real-life physics of soap bubbles.

It hit Steam and iOS devices a couple of weeks ago and has enjoyed excellent reviews ever since.

We asked Mr. Denman about his new game, including the development process, his strategy for marketing to potential players, and his experienced advice to anyone new to the indie scene.

Tell us a little bit about yourself and your company, Pine Street Codeworks.
I’ve been making games for about 20 years and this is my first solo-project, not making a game for another designer. I used to work in console games (Playstation and Xbox) and I was focused on the development of engines and other technologies.

Your company’s 1st project is a mobile game, Tiny Bubbles, which was inspired by your grandfather who was a scientist. Can you explain how Tiny Bubbles works and some of the math/science behind it?
I’ve been looking for a new game mechanic and sometimes inspiration comes from strange places. I wanted to explore the idea of soap bubbles that my grandfather did a lot of research on from the 1950’s. He studied metals, but it turns out their crystalline structure under a microscope is similar to soap bubble foams. I started working first on a foam simulation, which involves simulating the math behind the molecular dynamics. I had to understand these forces as well as surface tension and pressure. I won’t go any more into the math, but if your readers are interested, they can look up non-linear Jacobian matrix solvers.

Can any type of gamer, from casual to hardcore, enjoy playing Tiny Bubbles?
Yes, it does get pretty difficult later on in the game, but I do have a hint and powerup system for casual players that need a little help. Tiny Bubbles isn’t a mindless game, it definitely makes you think and learn something new. It teaches you all the rules and gameplay in the first world.

We read that your grandfather’s color blindness is what led you to create an option for that in the game. Was that difficult to design? How did you do it?
Yes, but I also have colorblind friends and they complained about how they immediately dismiss most colorful puzzle games. They also didn’t like how colorblind modes often involve adding intrusive icons or patterns on top of the game. So we came up with a whole new color language that works with all color-blindness types and allows the idea of mixing different-colored bubbles to make sense, almost like playing with a chemistry set. It took a lot of effort to design and test, but it is important to me to do it right because of my grandfather.

You used Unity to develop Tiny Bubbles. Why did you choose that specific engine for your game? Any advice to new developers on how to go about deciding what game engine is best to use for their project?
I had some past experience with Unity, but in general I just liked the way it was designed and that worked best with my style of programming. Each developer should look at their project and look at what other developers have done with an engine and use that as a guide to selecting an engine. Contact the developers on Twitter and ask them about their experiences with a certain engine.

How long did it take to develop Tiny Bubbles?
About 2 years with 1 person (me) and I had help from many other part-time folks who did work on some puzzle design, audio & music, and various community, press, and production help.

You’ve been a developer for many years. Do you find that no matter how many games you create, you always have something new to learn? If so, what new things did you learn while creating Tiny Bubbles, that you can apply to future games you develop?
Absolutely. If I wasn’t learning then it wouldn’t be fun any more to make the games. I like to work on new ideas to challenge myself. This squishy physics was something I’d played with before, but I’d never made a stable, commercial quality game with it like this, so that took considerable effort.

You’ve worked on some big games in the past for companies like Sony & Universal Studios. What are some of the positives of working on a small-scale game with very few people as opposed to a large game with a big team? What are some of the negatives?
There’s more creative freedom and a whole lot less meetings to sit in. The negatives are obvious because I don’t have a lot of idea contributors and ways to bounce things off others. But Seattle has a great community of other Indie developers, so I try to get out and show my game whenever possible.

Did you get a lot of feedback from others while developing Tiny Bubbles?
Yes, we went to a lot of local shows and Indie developer “show & tells” to get feedback. It’s important to get feedback both from other developers and from players. The feedback will be different. Developers tend to give actionable suggestions, whereas players will just tell you when something is slow, boring, not fun, etc. Often you can just tell by the way people behave whether they are into the game or not.

As a developer, how do you handle criticism/negative feedback?
I prefer unfiltered, brutal feedback. But figuring out a statistical truth is sometimes hard when you get one very “squeaky wheel” with a strong opinion. It’s important to stick to your own vision and find your audience. Tiny Bubbles doesn’t appeal to hardcore shooter fans and that’s OK because no game can be loved by everyone.

What’s been your marketing/PR strategy for Tiny Bubbles? (social media, awards, display at conventions, etc.).
We’ve used all these channels and gotten a lot of awards, but I’m not sure they’ve had much impact on sales. It’s a really hard thing to measure. Mostly we’ve been pushing the game hard on Indie gaming festivals and such. Tiny Bubbles greatest strength as a game is the gameplay. You can’t convey how good it is with a screenshot or even a video. So that has been the biggest challenge and that’s why awards are important because they say, “hey, this is a fun game.”

Did you self-fund or use any type of on-line campaign to finance for your game?
Self funded thus far.

Tiny Bubbles is now available for Steam & iOS users. It’s slated for Android/Amazon in June? Do you have an exact date yet on when that’ll release?
Not yet, but we’re expecting Early Access at the beginning of June.

Any plans to bring Tiny Bubbles to other platforms?
Yes, we are also looking at Switch.

What’s your next project?
Don’t have anything to announce yet.

What are your hopes for the future of Pine Street Codeworks?
To be honest, I just want to make enough money to keep making more new games with innovative gameplay.

If you had to give a new game developer one piece of advice, what would that be?
Work on what you love. Motivation is key to carry you through to the end of the project.

Is there anything else you’d like us to know about you, your company, or Tiny Bubbles?
If you pick up Tiny Bubbles and love it, be sure to leave a review. It helps other players know that the game is worth buying.

We greatly appreciate Stu Denman taking the time to answer our questions and wish him much success with his wonderful new game. We look forward to playing it on Android devices very soon and hope to hear about a release for the Switch down the road.

Tiny Bubbles can currently be purchased on Steam and the Apple store.

If you’d like to see more about Tiny Bubbles, including a trailer for the game, visit the official website.

Team Sonic Racing Will Zoom onto Store Shelves This Winter

Rachael Messer Discusses Her Role in the Adventure-Platformer, Forgotton Anne, & Shares a Behind the Scenes Look at How a Video Game Character is Brought to Life