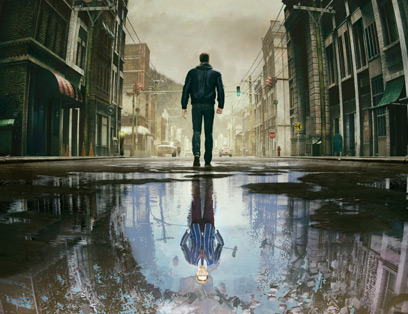 DONTNOD Entertainment continues to drop breadcrumbs about their upcoming episodic, psychological thriller, Twin Mirror, slowly leading us toward its release next year. Last month, the company’s CEO Oskar Guilbert hinted at unique gameplay and story/player interaction. Today, we have a trailer that showcases two of the features that he was talking about.

Mind Palace
If you’ve ever watched TV shows The Mentalist or Sherlock you may have heard this term before. It’s a mnemonic device used to associate things that are hard to remember with a location you know well. (Here’s a clip from The Mentalist via YouTuber Straight Edge which explains it very well).

For the main character Sam, it appears he can use this method like an expert. In fact, he can access his mind so well that he can determine possible outcomes of each scenario of actions he might have taken.

No matter how good at this he might be though, he’s somehow lost track of the night before. One of the responsibilities of players in the game will be to help Sam recreate his lost memories by putting together clues from real world investigations and pieces from Sam’s past that may be hidden in the depths of his mind.

The Double
The double refers to a 2nd version of Sam who is part of his subconscious mind.  He’s well dressed, bespeckled, sarcastic, and possibly a bit mischievous. He’s supposed to be Sam’s guide, but it’s uncertain if he always has the best of intentions. It’ll be up to the player to decide when to listen to this other voice and when not to.

“Lost on Arrival,” the 1st of the 3-episode narrative adventure will be out in early 2019, with the help of publisher, Bandai Namco. The game will release for PC, PS4, and XB1.

You can watch the exciting new trailer from DONTNOD Entertainment on their YouTube channel.

Warm Up with Scarf, a Journey-Esque 3D Platformer, Coming to PC This Winter