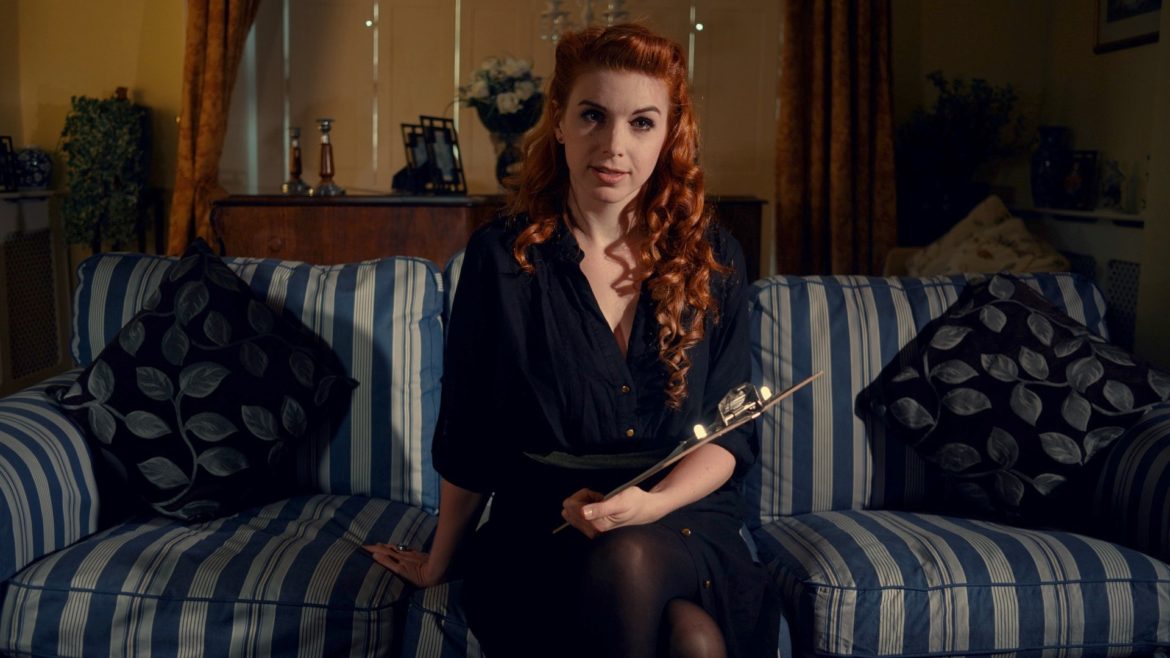 D’Avekki Studios is quickly making a name for itself as an expert developer of FMV (Full Motion Video) games. And, it shouldn’t be surprising seeing that founders, Tim & Lynda Cowles have tremendous experience creating interactive, murder mystery, party games, as well as a background in programming and film. They’ve also managed to create a highly lauded FMV game called The Infectious Madness of Doctor Dekker.

With their current success, the rising popularity of FMV games, and an intriguing new title on the way, we decided to ask the dynamic duo behind it all a few questions.

Here’s what they had to say.

Tell us a bit about yourselves and D’Avekki Studios.
We’re a husband and wife from the UK and we’ve been running D’Avekki Studios since 2003. Mostly we make murder mystery dinner party games, but in 2017 we released our first FMV game, The Infectious Madness of Doctor Dekker. This year, we’re releasing our second, The Shapeshifting Detective.

You’ve been very successful with your murder mystery flexi party games. Why the transition to FMV games?
It wasn’t actually as big a leap as it sounds. We got into murder mystery games by adding DVD video evidence to an existing best-selling range. Our games even had an interactive questioning section, albeit using the TV remote to navigate.

Over the years we’ve worked on lots of different game and film projects. Plus, Tim’s got a background in programming. So,  FMV games are actually the perfect fit for us. FMV games were also the first couch co-op games we played as a couple back in the ‘90s. So, we’ve always wanted to make them, but didn’t have the resources available until recently.

Can you tell us a bit about the process you go through to make a FMV game? How long does the process take?
From idea to finished project takes at least 9 months, at least {it did} for The Shapeshifting Detective. Our first game took longer, but we didn’t have Wales Interactive cracking the whip back then. (laugh)

We spend a few weeks developing the idea, squeezing as much fun and gameplay out of it as we can, then we start writing. After writing, there’s casting, location scouting, sourcing costumes and props. . . then we film and edit. Along with writing, editing takes the longest. We had over 12TB of footage for The Shapeshifting Detective.

What are your favorite FMV games?
We’ll always have a fondness for the first FMV games we played; Under a Killing Moon, Gabriel Knight 2, Phantasmagoria. They may be dated now but playing those games back then was really magical. . . just being able to play a game with real actors and movie scenes.

The latest wave of FMV games are great too. We’re quite fond of Contradiction (and have pinched a few actors from it). We’re really hoping the FMV renaissance grows more and more, so we get to {continue to} play them!

What do you love most about creating FMV games?
Finishing! No seriously, I think our favourite thing about it is when someone tells you how much fun they’ve had playing. There’s some real FMV love out there! We’ve seen some great Twitch streams and YouTube playthroughs and you have to take a moment sometimes to think, “they’re playing a game we made.” It’s surreal.

We also love to create new worlds, somewhere for people to escape to. And, we love video games and film production in general, so it’s the perfect match.

What are some of the biggest challenges?
Firstly, creating a story and script you’re committed to. You know there’s a long road ahead so you don’t want to lose enthusiasm. Secondly, milestones. We’d still be tinkering with Dekker if we’d let our creative sides run everything. At some point your business brain kicks in and says, “it’s good, you can ship it now.”

And the sheer amount of work involved, which is true for any small indie dev. You pretend it will different the next time around, easier, quicker. But, both games we’ve done so far have ballooned into epics!

What was the inspiration for The Shapeshifting Detective?
We both love noir themes, but we also like to have a little strange mixed in too. The idea was a game where it didn’t matter so much what you said, but rather who you were when you said it. And, the idea of a shapeshifting detective just sprung from that.

We actually shelved it for a while because we thought it would be too hard to make. But, the few people that we told, loved the sound of it, so we gave it another shot and managed to come up with something workable and fun.

Who wrote the script?
We both did. We’ve shared the writing on pretty much all our projects, although sometimes one of us takes the lead. We spend a lot of time talking about the characters and hashing out the story together, but for the actual writing we tend to work on different parts.

Generally we’ll pick a character we want to write and go for it. With Dekker, we wove them together at the end. For Shapeshift, we had a blueprint to work on the {whole} way through.

Tell us about the in-game radio station.
The Radio August show “Dark Nights with Poe and Munro” plays in the taxi and the guesthouse when the player is deciding where to go next, and it really adds a lot of atmosphere to the game. It’s got news updates about the murder, local weather, dream interpretations, {etc.}

We put out a call for short horror story submissions and asked some of our favourite Twitch streamers to read out the best ones, so you could be playing the game and suddenly hear a voice you recognize. It helps create the world and is, hopefully, a good upgrade to the standard location map mechanic we could have used.

Your previous game, The Infectious Madness of Doctor Dekker, is known for its great cast. And, it looks like some of those same people will be playing a role in The Shapeshifting Detective. Where did you find such a terrific group of actors/actresses?
For both games, we put out casting calls on online networks. Doctor Dekker has been called “a masterclass in acting,” which we’re really proud of especially as, historically, FMV games weren’t really lauded for their acting. It’s proof that you don’t need to hire big names and that there’s a lot of very talented people out there.

Nowadays you get to see “self-tape” auditions where actors film a few lines and send them to you, which means you have access to a lot more people who perhaps couldn’t make face to face auditions normally. It’s one of the most fun parts of creating an FMV game, and whilst we love working with familiar faces, we definitely get a big kick out of finding new talent too.

The two of you not only run your own studio but are also married. Can you tell us how you’re able to balance your work and personal lives and not let the two get in the way of each other?
Ha, I’m not sure we do! I think there’s an overall balance, if you look at the big picture, but on a day-to-day basis you have to do what needs to be done. That means you’re sometimes working from when you wake up until 10 o’clock at night, like when you’re trying to make an FMV game, for example. But, we get to talk a lot during the day or have lunch together, so that’s the upside. You also get to experience the same highs and lows, so it’s easy to empathize with each other if you’ve had a good or bad day at work.

The Infectious Madness of Doctor Dekker won a spot in the Guinness Book of World Records for the “most full motion video” in a video game. This is quite the prestigious accomplishment. Was this a dream of yours to be a world record holder? How did this come about?
We certainly didn’t set out to get a record, but since we missed most of the awards season, it was nice to get. It was only after we’d finished editing and saw we’d gotten over 7 hours, that we started looking into it. Wing Commander 4 held the record before, which is a game we loved playing too, so it has a great heritage. We’re definitely proud of it though and have unashamedly hung it by our front door!

Have you narrowed down the release date yet for The Shapeshifting Detective?
Yes. No. Yes. It will be October. Unless it’s not. Seriously though, it will be down to whether or not many changes have to be made to get it through console submission.

Are you planning to continue making FMV games beyond The Shapeshifting Detective?
Yes! We’ve got a couple of projects lined up; one “proper” FMV game and one experimental mobile FMV game. So, as soon as we’ve gotten past the “never again” stage of this one, we’ll probably start working on those. We have lots of other ideas as well. So, as long as people keep wanting to play them, and we can make enough money to live in the meantime, we’ll keep making them.

What’s your best piece of advice to a developer thinking of creating their first FMV game?
Keep it simple and keep it small. The scale of a project can quickly get out of hand, especially when you add branching dialogue. Also, there’s a very fine line between an FMV game and an interactive movie. Make sure you know what side of that line you fall on and market it the same way, because your audience may be looking for one more than the other.

Thanks so much for your time.
Thank you!

Learn more about the studio’s upcoming FMV murder mystery, The Shapeshifting Detective, on the game’s official website. You can also watch a teaser trailer for it on the YouTube channel of publisher, Wales Interactive.

The company’s previous FMV title, The Infectious Madness of Doctor Dekker, is currently available for purchase on Steam, HumbleBundle, Xbox One, PlayStation 4, and Nintendo Switch. Read more about it at www.doctordekker.com. See a trailer for it, here.

Get Ready to “Wall Jump” with Family...