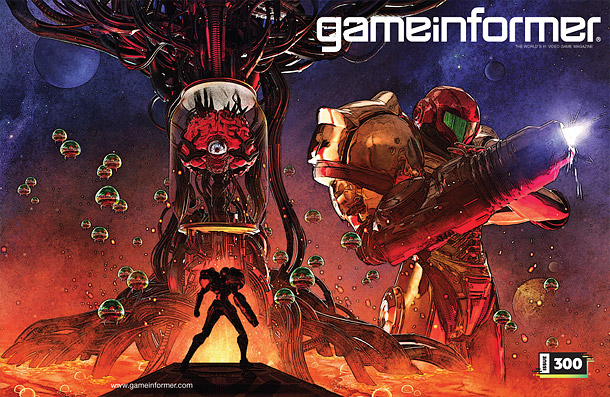 Going from a small, sporadically released newsletter to a powerhouse resource for gamers worldwide, Game Informer has come a long way in its 27 years in existence. Even in a world where other publications are struggling, the Minneapolis-based magazine (owned by GameStop) continues to hold strong with 7.6 million subscribers.

In April, GI will be hitting a new milestone, achieving its 300th issue. In observance of this special occasion, those behind the magazine decided to make a big deal of this major accomplishment by working even harder than normal to produce a massive edition that fans should greatly enjoy.

Not only will the upcoming issue contain 5 different cover possibilities, but be filled with an enormous amount of content, covering GI’s Top 300 games of all time.

As you can guess, this list was not easy to come by, as those creating the issue took weeks to hammer it out. (You can read more about the process, here).

Choosing the look of the 5 different covers wasn’t easy either. 4 of the 5 were chosen by the GI staff as representations of the “rich breadth” of the gaming industry (& had never been shown on the cover previously). The 5th is a throwback to what GI looked like back in 1991.

If you subscribe to the magazine via GameStop Rewards, you’ll be seeing your issue in the mail very soon. The issue is also accessible digitally through iOs, Android, Google Play, or PC/Mac. You can also subscribe with Nook, Kindle, or Zinio.

If you don’t currently receive Game Informer, you can subscribe here.

If You’re Looking for a Simple, Yet Challenging Casual Game, Midnight Deluxe Might Be for You!