Our Interview with Tag of Joy About Point & Click Mystery Adventure, Crowns & Pawns: Kingdom of Deceit 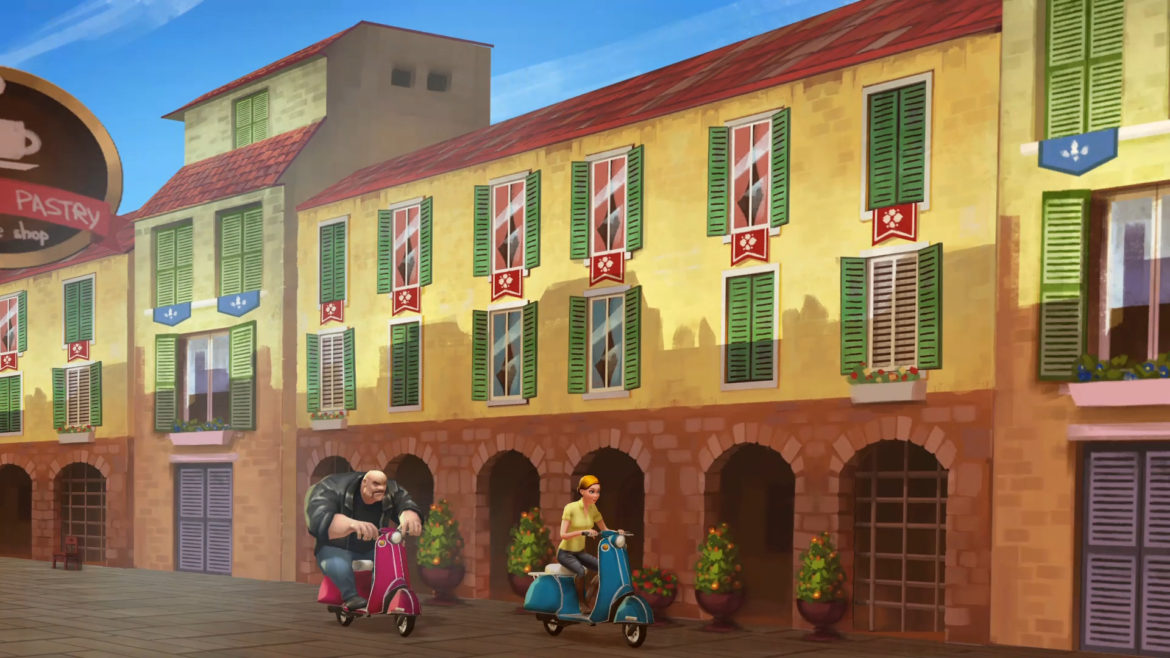 If you love mystery, intrigue, venturing through Europe, solving puzzles, and detective work, then you’ll most likely love the upcoming title from Tag of Joy; Crowns & Pawns: Kingdom of Deceit.

We recently spoke to the creators of this mystery adventure to find out more about the game itself as well as its development.

Tell us about your company, Tag of Joy.
Mingailė Striaukaitė (MS): Tag of Joy is an award winning indie game development company, based in Lithuania, EU. We’ve been around for about 8 years now, working on various projects, big and small. We always strive for innovation and we love experimenting. We’re not afraid of any challenge.

Šarūnas Ledas (ŠL): Oh yes, we love challenges! In the past we’ve developed quite a few games for partners, but also some original games of our own, most notably “Monster Buster: World Invasion”. It was the first location based AR monster fighting and collecting game on mobile back then. So, we have experience with various genres and technologies, but recently we decided that we’d love to tap into the narrative waters. We’ve always loved games that tell a story, that is why we’re mostly working on those kinds of games right now.

Tell us about Crowns & Pawns: Kingdom of Deceit.

(MS): Crowns and Pawns is a point and click adventure at heart, but with various modern features and innovations, that give the genre a whole refreshed look.

The story of the game is inspired by the real life history of Central and Eastern Europe, from middle ages to this day.

The protagonist, Milda, is a girl from Chicago, with her roots stretching to Lithuania. She unexpectedly receives the last will of her grandfather and discovers she’s the last guardian of a mysterious family secret.

Curious of what the secret could be, Milda flies to Europe to try and figure it out.

The art style is really nice. It’s clean, eclectic, and colorful. What inspired the style and how did you create this unique look?

(ŠL): Thank you! First and foremost we wanted to create a game that kind of looks like a classical adventure, but is modern, quite detailed and would use some fancy graphics features.

We took inspiration from the semi-realistic look of Broken Sword, but wanted to add some extra color vibrance like found in Curse of Monkey Island.

To employ some modern features, we decided that we could have hand-painted 2D backgrounds, but 3D characters. Then, we could have a much wider camera angle variety and character animation.

To be able to do that, we also projected the hand-painted backgrounds onto simplified 3D scenes, which allowed us to add a very nice parallax effect, real-time shadows and lighting. All in all, it took quite some experimenting, but I think we managed to achieve the look we aimed for!

In the game, players will be venturing through modern day Europe. Can you tell us a few of the real-life locations we’ll be able to visit?

(MS): A lot of the story revolves around Lithuania, Milda’s family home country. That’s where most of the game takes place. Even though the game starts in Chicago, where Milda is from, she goes to the capital of Lithuania; Vilnius, and visits various famous locations there, like Vilnius University and St. Catherine’s church.

Milda’s quest will also take her to some other countries around Europe. But, we’ll keep that for the players to see themselves.

How important are decisions in the game? How much will they affect the final outcome?

(MS): The decisions in the game are meant to provide a unique experience for each player. Your decisions will have impact on the protagonist herself, her personality, as well as impact Milda’s relationship with other characters.

Some choices will also affect the challenges that players face and the way the narrative unfolds.

(ŠL): And let’s not forget, that the player decides how the main character looks! It will be nicely integrated into the whole gameplay experience and will provide an extra mechanic for the player to work with.

What customization options will be available for Milda?

(MS): Players will be able to choose the protagonist’s looks and change her clothes. Like mentioned before, some choices made will have impact on Milda’s personality and other traits.

We’re actually really excited that the customization of the character is not just a fun feature for the players, but is also used in puzzles and in the narrative.

Can you tell us a bit about the puzzles we’ll encounter in the game?

(MS): We love the traditional point and click games so we try to take the best we can from them.

We have mini games, item collecting and combination puzzles. We have some persuasion puzzles in dialogues as well.

The player will also have to do some detective work by combining facts and clues together in order to find out what happened in Europe years ago and what Milda’s grandfather was trying to protect.

(ŠL): The player will also have to change Milda’s appearance to solve some puzzles, which is not that common in traditional point-and-click adventures. It’s one of the little innovations that we thought would be very nice to have.

The music really catches your attention and perfectly sets the tone for the game. Who wrote the music? What inspired the mysterious & exotic sound?
(ŠL): Most of the music and sound design is done by an award winning composer Daniel Noah Pharos.

He has worked on a variety of notable adventure games, including some Daedalic titles, such as A New Beginning. He has also written music for the highly acclaimed fan adventure game Broken Sword 2.5, in which I was the art director. We were teammates on that project a long time ago.

I loved the music, and since Broken Sword is a huge inspiration for us in general, it was a perfect fit.

We’re trying to have a mix of mystery and adventure in the music, because the game is all about that!

(MS): We’d love to have the game released on other major platforms like Xbox, PlayStation and Nintendo Switch (the latter is definitely a great platform for adventure games).

We’re actually working on controller support alongside mouse and keyboard gameplay, so that we’re able to provide a great experience for players preferring one or the other.

You’ll be participating in the Steam Game Festival (6/16-6/22). What do you have planned for this special event?

We’re also doing a live-stream on Saturday, the 20th at 8 PM EEST (1pm EST), where we’ll play the demo ourselves with some nice developer commentary.

Both of these videos will also be available on the Tag of Joy Youtube channel, so anyone can catch it all later as well. But, of course we’ll be hanging around the social media and Steam all week hoping to catch a chat with the players!

What advice would you give to fellow indie developers who are creating their own point and click adventure?

I think there are two paths that a point-and-click developer can take.

One is to work solo or find 1-2 colleagues max, minimize the costs and, therefore, the risks.

The other path is to aim for the highest production value possible and try to stand out in that regard.

Both of those approaches seem to pay off and give the chance for the developers to keep working on new games, which, in the end, is how success is defined in this industry.

Whichever path you decide to take, however, you need to make sure you reach your players, which is only possible with regular updates on social media, demoing at events, etc.

On top of that, I would also highly recommend working with a publisher. They already have a portfolio, they have a fan base, so chances of success are increased if you have a partner like that.

What point & click games would you recommend to our readers?
(ŠL): Broken Sword and Monkey Island series are probably my favorite classics. Speaking of the modern ones, I love the Life is Strange games. They’re not exactly point-and-clicks, but they’re a very interesting upgrade to the genre. (A lot of dialogue and storytelling, but also a perfect amount, along with the difficulty of gameplay).

(MS): The Journey Down is probably one of my favorites so far. Haven’t finished the whole trilogy yet, but I love the puzzles. They really give a sense of achievement and satisfaction. Oh, and the dialogues are a lot of fun.I love Bwana’s comments.

(ŠL):  The Journey Down is, indeed, a very nice trilogy. I was surprised how well it is designed and balanced.

What’s next for Tag of Joy/Crowns & Pawns: KOD?
(MS): As we move towards the finish line with Crowns and Pawns, we’re already looking ahead with new ideas. We love narrative games and we’d love to continue working on them, experiment more on new titles and try to make something that would appeal to today’s player.

(ŠL): We’d love to make more point-and-click adventures in the future. That will strongly depend on how many players enjoy Crowns and Pawns.

We also have the urge to try something slightly new. Definitely story-driven, but a little different gameplay, something closer to Firewatch and Life is Strange.

Stay tuned and follow our social media to be the first to see the announcements!

Thanks so much to Šarūnas Ledas & Mingailė Striaukaitė for answering our questions. We’ll look forward to playing Crowns & Pawns: Kingdom of Deceit next year.

Be sure to check out the developer Q&A on June 18th & the livestream gameplay on June 20th as part of the Steam Game Festival. Also, make sure to try out the free demo this week on Steam.

Read more about C&P: KOD on the developer’s website.

Our Interview with Cyrille Bonard About His Lively, Puzzle Platformer, Ruggnar