Top Posts
Moltres & Origin Forme Giratina Return to Tier...
What You Need to Know About Mega Evolutions...
Take Part in the Free Comic Book Day...
Professor Layton & the Unwound Future Travels to...
Publisher, Limited Run Games Announces What’s Next for...
Natsume Gives Fans a Small Sneak Peek at...
“Worms Rumble” Announced for PC, PS4, & PS5
The Next Update & Events Coming to Monster...
Overcooked! 2 DLC, Sun’s Out, Buns Out, Releases...
Sony Reveals 9 Titles to Kick Off Their...
A List of Physical, Collector Editions for Titles...
Set Sail on an Incredible, Zelda-esque Adventure When...
First 4 Figures Opens Pre-Orders for The Legend...
Our 10 Favorite Games from the 3-Day Guerrilla...
Crash Bandicoot 4: It’s About Time Announced for...
Our Interview with Tag of Joy About Point...
Our Interview with Cyrille Bonard About His Lively,...
Our Interview with Noema Games About Point &...
Our Favorite Games from the Sony PlayStation 5...
Our Interview with Marina Sciberras from Cowleyfornia Studios...
Our Interview with William Kruger from Silvernode Studios...
Exciting Livestreams to Watch in Lieu of This...
Our Interview with Jacob Sporrong About His Visual...
Tune in for a Season of Live News...
Pathea Games Announces Puzzle Adventurer, Ever Forward, for...
Reshiram, Zekrom, & Kyurem Come to Tier 5...
Suit up for Action with This Line of...
E3 Exclusive Funko POP! Figures Will Release May...
EMMA: Lost in Memories Journeys to Consoles
25 Indie Games We Can’t Wait to Play
Destroy All Humans! Announced for Physical Release on...
Spike Chunsoft Announces the Danganronpa Trilogy for Mobile...
Celebrate the Return of Final Fantasy VII with...
Our Top 10 Ways to Use an Elite...
Cat Quest “Pawsome Pack” Coming July 31st for...
Begin Your “Journey” on Steam, June 11th
Several Exciting Demos You Can Download for Free...
Rhythm, Action Adventure, Giraffe & Annika Travels to...
“Geek Out” Your Christmas Tree with These Cool...
Our Interview with Ayu Sakata, Writer & Production...
First 4 Figures Announces an Official Facebook Page...
Sport, Showcase, & Embrace the Latest Merchandise from...
Story of Seasons: Friends of Mineral Town is...
Our Interview with Andy Mitchell About His Upcoming...
Harvest Moon: Mad Dash Comes to Mobile Devices
Our Interview with Kristi Ramot & Dagmar Blommaert...
La-Mulana I & II Venture to Consoles
Melee Brawler, Drill Man Rumble, Comes to Steam...
Monster Hunter: World The Official Complete Works Releases...
Infuse Studio’s Breathtaking Exploration Game, Spirit of the...
Our Interview with Missing Game Studio About Their...
Explore Ruins & Hunt for Artifacts When Adam’s...
Our Interview with Lantern Studio’s Art Director, Beidi...
Luigi’s Mansion 3 Multiplayer Pack Part 1 Has...
NIS America Announces 3 Big Additions to Their...
Our Interview with Baseline Games About Developing the...
Indie Publisher, Ratalaika Games Announces What’s Next in...
Play Asia Opens Physical Pre-Orders for Twin Breaker:...
Multiplayer Races to Mario Kart Tour March 8th
A Free Demo of Final Fantasy VII Remake...
Adorable 3D Platformer, Lumote, Releases on Steam
Funko POP! Announces 9 New Additions to Their...
Action RPG, Sparklite, from NC Developers, Red Blue...
Wunderling, a Mario-esque Platformer with a Twist, Releases...
Our Interview with Avery Howell from Malheur Games...
Our Interview with Journey Bound Games About Their...
Langrisser I & II Demo Lands on the...
A Free Demo of Pokémon Mystery Dungeon: Rescue...
“Marvel’s Spider-Man Script Book” Swings Into Bookstores This...
Our Interview with Garrick Campsey About His Unique...
Square Enix Announces a Kingdom Hearts All-in-1 Package...
Apply Now for Full-Time Openings & Summer Internships...
Get Ready to “Wall Jump” with Family &...
First Person, Sci-Fi Puzzler, The Turing Test, Launches...
A “How To” For Defeating Landorus
Mobile Title, Dragon Quest of the Stars, Releases...
Our Interview with Jared Barr from Thetau Games...
Upcoming Toy, Game, & Comic Book Conventions You...
Nintendo Announces an Animal Crossing: New Horizons Switch...
Humorous, Action RPG Kofi Quest: Alpha MOD Ventures...
Mega Man Blasts into Action in the Latest...
Try Out the Free Demo of Yooka-Laylee &...
Capcom Announces What’s Next for Monster Hunter World:...
Satisfy Your Hunger For Nostalgia with a BurgerTime...
Interview with Emma Ramsay & Andy Yong, the...
Our Interview with Carlo Orlandi, Co-Developer of the...
An Interview with Developer Dimitri Adoniou About His...
The North Wilkesboro Speedway is Coming to iRacing
A “How To” for Defeating Team GO Rocket...
Our Interview with Chris Otey, Lead Designer for...
A Fast & Charge TM Guide for the...
Minecraft Earth Hits Mobile Devices Later This Year,...
Super Mario Maker 2 is Coming to the...
Konami Announces a Castlevania Anniversary Collection for PC...
Mark Backler from Sketchbook Games Talks About His...
Cresselia, Articuno, & Zapdos Return to Tier 5...
A “How To” for Defeating Genesect
Home Features See What Bluepoint Games Has in Store for Players with their Shadow of the Colossus Remake for the PS4 (Releases 2/6)
FeaturesGame 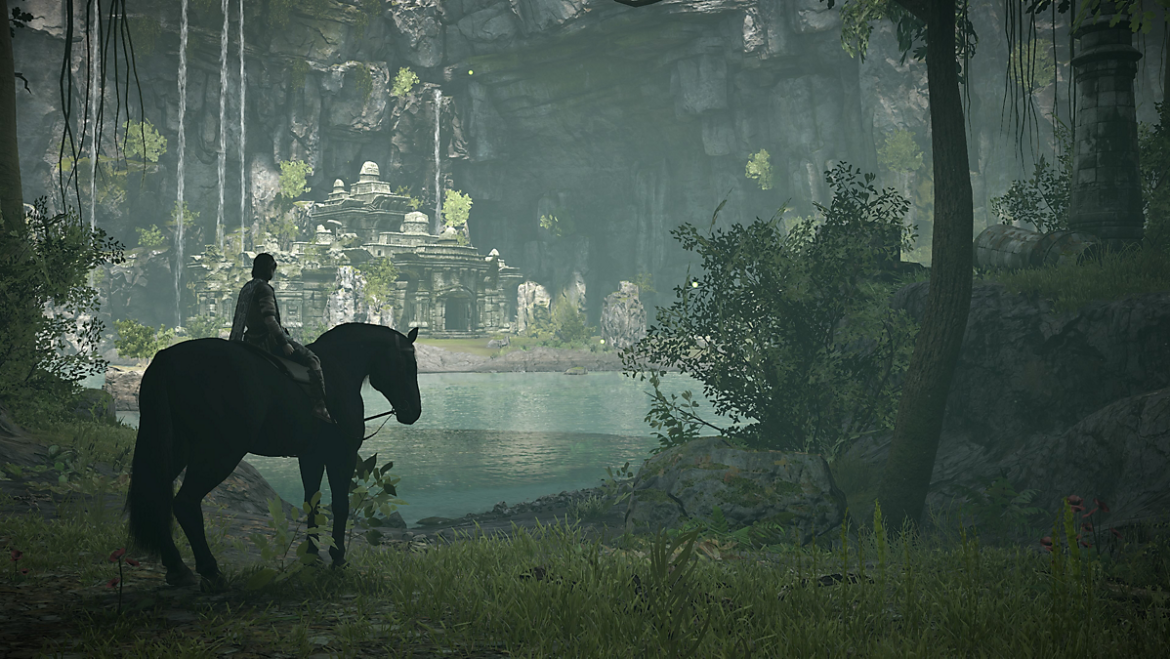 We all have those exceptional gaming experiences that standout from the rest. Those games that stir our hearts, minds, and emotions and transport us to worlds we’ve never seen before. That occupy our memories long after we’ve finished playing and leave us with a tinge of sadness when we have to say, “goodbye.”

For me, one of those special games is the Shadow of the Colossus on the PS2. The unique gameplay, massively gorgeous landscapes, intriguing characters, mysterious storyline, and beautifully designed colossi, weren’t just goose bump worthy, they took my breath away.

The game was originally developed by SIE Japan Studio and Team Ico and released in North America/ Japan in 2005. In 2011, Bluepoint Games put out a remastered HD version of the game for the PS3 (in a duo pack with Ico). Now, with the existence of the PS4 Pro and 4K technology, Bluepoint has once again reimagined the game for a new generation.

One of the main goals BG set for themselves was to rebuild the game graphically, “from the ground up.” They assembled a full team of artists in order to take on this gigantic task.

Throughout the development process, the team had many “deliberate discussions” regarding the enhancements they could make, always asking themselves if each should be implemented and why.

To make sure their updates stayed true to what fans expect and the original intentions of the game’s developers, they studied the design and art direction notes from when the game was first created.

Besides graphical improvements, BG also worked out some of the bugs in the game and added a brand new feature called Photo Mode.

Players can use the new Photo Mode to take pictures of their favorite SOTC moments. But, it goes even further than just snapping a shot of something you find appealing. Players will be able to manipulate their photos and really make them their own.

Here’s how Art Director, Mark Skelton, describes the new feature in his blog post on playstation.com.

Everything I had access to as the Art Director, you have access to as the player. You can start with a filter and adjust all the way down to color balancing the shadows, midtones, and highlights. Then, on top of that, control the depth of field ranges and amounts, in addition to the vignette.”

Mr. Skelton also goes on to say that taking pictures is “super easy.” The camera can be rotated 90 degrees either way and be switched from the player to the horse.

It’s extremely impressive to see how thoughtful Bluepoint Games has been in their reimagining of this epic game. From everything I’ve read and seen so far, it appears they’ve truly put their heart and soul into their work. And, it’s not surprising. They are, after all, the “go to” company for remakes, having worked previously on projects such as the remastered HD God of War: Collection.

I look forward to reliving the magnificent experience I remember from years ago, now in beautiful, 4K.  I also encourage anyone who’s never played SOTC to give it a try. It’s a deeply moving action-adventure game like none you’ve ever played before.  I don’t think you’ll be disappointed.

If you’d like to read more about the game, check out the fascinating blog posts from the Bluepoint team on playstation.com.

For anyone who wants to see how the PS4 version compares to the PS2 & PS3 HD versions, check out this playstation.com YouTube video.

Thinking of purchasing the game?
A digital version will be available for purchase/download at 12am Tuesday morning on the PlayStation store.

Physical copies will be releasing on 2/6 in most retail stores & on-line for $39.99. There is a special edition with a steelbook cover and a few extras that retails for $49.99, however, availability may be limited on this particular item. (Most on-line retailers no longer show it available).

If you love the music of the game, @iam8bit is putting out a special vinyl soundtrack that will release later in the year. It’s up for pre-order now for $40 on the company’s website.

Fun Fact: Per PlayStation World, there’s a “Last Guardian” Easter egg in the new SOTC game. So, if you’re playing, be sure to look for it.

See What Bluepoint Games Has in Store for Players with their Shadow of the Colossus Remake for the PS4 (Releases 2/6) was last modified: April 9th, 2019 by NW Sanderson
bluepoint gamesnew releasePS4PS4 Proshadow of the colossus
0 comment
0
Facebook Twitter Google + Pinterest