Although The Gentlebros are hard at work getting ready for the release of Cat Quest II, co-owner/developer Desmond Wong was kind enough to take time out of his busy schedule to answer a few questions for us about this highly anticipated sequel.

So, what’s next for the company? Why did the developers decide to make a second game? Will more Cat Quest plushies be available to fans in the future?

Find out the answers to this and much more below.

Tell us about your company, The Gentlebros.
We’re a three man studio made up of ex Koei-Tecmo developers. Currently based in Singapore, we’re best known for Cat Quest.

You released the 2D, open world RPG Cat Quest in 2017. Since its release, it’s won multiple awards and received many accolades from audiences and critics alike. Why do you think that Cat Quest has resonated so well with those who play it?
Everyone loves cats! But that aside, I think it’s because it’s a game that we made with a lot of love and passion, and so this has come through in the game, and people can feel it as they play.

Why did you decide to make a Cat Quest sequel? What factors went into that decision?
We had overwhelming feedback for a sequel, mainly because of an easter egg we left in the first game saying that if Cat Quest got popular enough, {that} dogs would appear.

So here it is! We’re making good on our promise!

Did you know when you were making the 1st game that you wanted to make a sequel or was that decided afterward?
We didn’t know that yet. In fact, we were thinking we would have to close our company after Cat Quest. We were out of money, and if Cat Quest failed, we would have had to call it a day.

However, when we designed Cat Quest, we had always meant it to be a huge universe that we could keep pulling from. If it succeeded, we knew we would make more.

How does a developer know when it’s best to work on a sequel versus creating a whole new game?
I think it boils down to how much you still have to say on the subject. For us, we had a lot of things we wanted to do in Cat Quest that we could not manage to. Making a sequel enabled us to fulfill a lot of those dreams we had for it.

How does the process of making a sequel differ from that of making an original game? What are some of the positives/negatives?
Simply put, a lot of the infrastructure is already there, and the formula for fun gameplay is also there. It’s really half the battle won.

I think the greatest challenge is making something that feels fresh, but still familiar to those who loved the first game. Try to innovate and add too much, and you risk losing what made the original great in the first place.

When making a 2nd game, how do you balance familiar content with brand new content? Is there a percentage you strive for such as 70% familiar/30% new?
We don’t know if there is a hard and fast rule for this. For us, what we did is we kept what made the game work. The core mechanics, essentially. And then we figured out how to expand it in ways that felt fresh and new.

For Cat Quest II, this meant adding in co-op.

What’s your #1 tip to developers making their 1st sequel?
Find out what is the spirit of your game. And, never lose that.

Cat Quest II is launching on Steam Sept. 24th, on consoles later this year, and on mobile at a yet to be determined date. Will there be any differences in the mobile, PC, or console versions?
Content wise, there is parity on all consoles. The main difference is how you play it. On mobile, you play with the a Touch control scheme, while on PC and consoles you can use a gamepad.

On Switch, it’s especially cool because you can split the joy-cons and immediately be able to play co-op with little fuss.

Will there be a physical release of the game for console?
This is yet to be determined. It usually depends on how well the digital version does. So if you guys want a physical version, make sure you support the digital one.

You released a Cat Quest plush through Symbiote Studios. Can we look forward to anymore Cat Quest series plushies?
Yes!

What’s next for The Gentlebros? Cat Quest 3? Something brand new?
Expect something totally brand new, but set in the Cat Quest universe.

Cat Quest II will be releasing on Steam on 9/24 and on consoles (PS4, XB1, Switch) this Fall. The game is available now for iOS devices via Apple Arcade.

The sequel will be bringing some new features to the series including:
– Co-op play
– New Switch gameplay
– Dogs/the ability to play as a dog
– New weapons & spells
– Armor upgrades

There will also be a brand new storyline and an extension to the universe which includes the new, Lupus Empire. 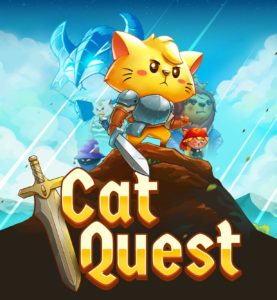 Love plushies? Be sure to check out the Cat Quest Hero plush available from Symbiote Studios (more to come!). 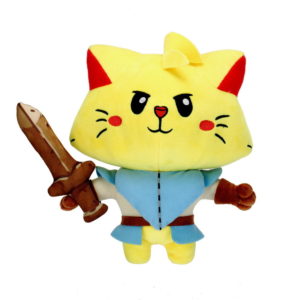 Thanks so much to Desmond Wong for the interview. We look forward to playing Cat Quest II!

Mario Will be Getting the Movie Star...

Warm Up with Scarf, a Journey-Esque 3D...