Top Posts
Azelf Enters Tier 5 Raids November 24th
Warm Up with a Cool Sweater from Merchoid
Terrakion, Cobalion, and Virizion Return to Tier 5...
Slice of Life, Visual Novel, I’m Oh So...
10 Kickstarter Campaigns Worth a Look
Craft, Build, and Explore with Relaxing, Open World...
Dive into the Holiday Season with New Merchandise...
13 Frighteningly Fun Indie Titles to Play at...
Hidden Object, Puzzle Adventure, Darkarta: A Broken Heart’s...
Try a Free Demo of Murder Mystery, Visual...
Play-Asia Announces 3 Spookily Spectacular PS Vita Titles...
8 Magically Magnificent Upcoming Titles for PC &...
What You Need to Know About Mega Evolutions...
Take Part in the Free Comic Book Day...
Professor Layton & the Unwound Future Travels to...
Publisher, Limited Run Games Announces What’s Next for...
Natsume Gives Fans a Small Sneak Peek at...
“Worms Rumble” Announced for PC, PS4, & PS5
The Next Update & Events Coming to Monster...
Overcooked! 2 DLC, Sun’s Out, Buns Out, Releases...
Sony Reveals 9 Titles to Kick Off Their...
A List of Physical, Collector Editions for Titles...
Set Sail on an Incredible, Zelda-esque Adventure When...
First 4 Figures Opens Pre-Orders for The Legend...
Our 10 Favorite Games from the 3-Day Guerrilla...
Crash Bandicoot 4: It’s About Time Announced for...
Our Interview with Tag of Joy About Point...
Our Interview with Cyrille Bonard About His Lively,...
Our Interview with Noema Games About Point &...
Our Favorite Games from the Sony PlayStation 5...
Our Interview with Marina Sciberras from Cowleyfornia Studios...
Our Interview with William Kruger from Silvernode Studios...
Exciting Livestreams to Watch in Lieu of This...
Our Interview with Jacob Sporrong About His Visual...
Tune in for a Season of Live News...
Pathea Games Announces Puzzle Adventurer, Ever Forward, for...
Reshiram, Zekrom, & Kyurem Come to Tier 5...
Suit up for Action with This Line of...
E3 Exclusive Funko POP! Figures Will Release May...
EMMA: Lost in Memories Journeys to Consoles
25 Indie Games We Can’t Wait to Play
Destroy All Humans! Announced for Physical Release on...
Spike Chunsoft Announces the Danganronpa Trilogy for Mobile...
Celebrate the Return of Final Fantasy VII with...
Our Top 10 Ways to Use an Elite...
Cat Quest “Pawsome Pack” Coming July 31st for...
Begin Your “Journey” on Steam, June 11th
Several Exciting Demos You Can Download for Free...
Rhythm, Action Adventure, Giraffe & Annika Travels to...
“Geek Out” Your Christmas Tree with These Cool...
Our Interview with Ayu Sakata, Writer & Production...
First 4 Figures Announces an Official Facebook Page...
Sport, Showcase, & Embrace the Latest Merchandise from...
Story of Seasons: Friends of Mineral Town is...
Our Interview with Andy Mitchell About His Upcoming...
Harvest Moon: Mad Dash Comes to Mobile Devices
Our Interview with Kristi Ramot & Dagmar Blommaert...
La-Mulana I & II Venture to Consoles
Melee Brawler, Drill Man Rumble, Comes to Steam...
Monster Hunter: World The Official Complete Works Releases...
Infuse Studio’s Breathtaking Exploration Game, Spirit of the...
Our Interview with Missing Game Studio About Their...
Explore Ruins & Hunt for Artifacts When Adam’s...
Our Interview with Lantern Studio’s Art Director, Beidi...
Luigi’s Mansion 3 Multiplayer Pack Part 1 Has...
NIS America Announces 3 Big Additions to Their...
Our Interview with Baseline Games About Developing the...
Indie Publisher, Ratalaika Games Announces What’s Next in...
Play Asia Opens Physical Pre-Orders for Twin Breaker:...
Multiplayer Races to Mario Kart Tour March 8th
A Free Demo of Final Fantasy VII Remake...
Adorable 3D Platformer, Lumote, Releases on Steam
Funko POP! Announces 9 New Additions to Their...
Action RPG, Sparklite, from NC Developers, Red Blue...
Wunderling, a Mario-esque Platformer with a Twist, Releases...
Our Interview with Avery Howell from Malheur Games...
Our Interview with Journey Bound Games About Their...
Langrisser I & II Demo Lands on the...
A Free Demo of Pokémon Mystery Dungeon: Rescue...
“Marvel’s Spider-Man Script Book” Swings Into Bookstores This...
Our Interview with Garrick Campsey About His Unique...
Square Enix Announces a Kingdom Hearts All-in-1 Package...
Apply Now for Full-Time Openings & Summer Internships...
Get Ready to “Wall Jump” with Family &...
First Person, Sci-Fi Puzzler, The Turing Test, Launches...
A “How To” For Defeating Landorus
Mobile Title, Dragon Quest of the Stars, Releases...
Our Interview with Jared Barr from Thetau Games...
Upcoming Toy, Game, & Comic Book Conventions You...
Nintendo Announces an Animal Crossing: New Horizons Switch...
Humorous, Action RPG Kofi Quest: Alpha MOD Ventures...
Mega Man Blasts into Action in the Latest...
Try Out the Free Demo of Yooka-Laylee &...
Capcom Announces What’s Next for Monster Hunter World:...
Satisfy Your Hunger For Nostalgia with a BurgerTime...
Interview with Emma Ramsay & Andy Yong, the...
Our Interview with Carlo Orlandi, Co-Developer of the...
An Interview with Developer Dimitri Adoniou About His...
The North Wilkesboro Speedway is Coming to iRacing
A “How To” for Defeating Team GO Rocket...
Our Interview with Chris Otey, Lead Designer for...
A Fast & Charge TM Guide for the...
Minecraft Earth Hits Mobile Devices Later This Year,...
Super Mario Maker 2 is Coming to the...
Konami Announces a Castlevania Anniversary Collection for PC...
Mark Backler from Sketchbook Games Talks About His...
Home Features Our 10 Favorite Games from the 3-Day Guerrilla Collective Event
FeaturesGameGame Dev/PubOther

Our 10 Favorite Games from the 3-Day Guerrilla Collective Event 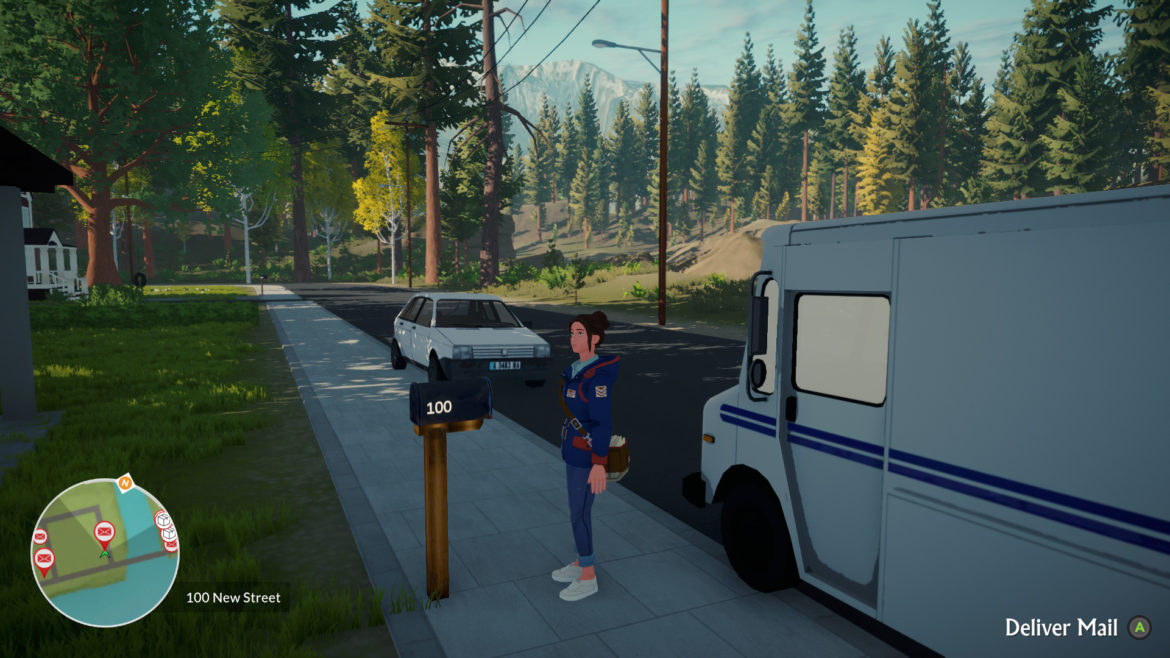 The cancellation of this year’s E3 has paved the way for several in the business of video games (developers, publishers, and/or media) to create their own showcases of upcoming titles for PC, mobile and/or consoles.

One such example is the Guerrilla Collective, a 3-day event produced by The MIX in cooperation with Kinda Funny Games/Greg Miller, which brought attention to an abundance of independent games releasing in the coming months.

Of course, with that many game announcements, there was a little something for everyone, no matter what their preference of genre. For us, however, there were 10 titles that really stood out, not only as games that immediately grabbed our attention, but as ones we genuinely want to play.

Lake
In this point & click/free-roaming sim, set in 1986, players will embody Meredith Weiss, a 40-something woman taking a 2-week hiatus from her life in the big city to come back home and stand-in for her father as a local mail carrier. What will happen during these 2 weeks? Where will life take Meredith once her time away is over? It’s up to you as the player to decide.

Ambition: A Minuet in Power
Use your powers of persuasion, intuition, and seduction in this unique, rogue-lite visual novel, set in pre-revolutionary France, where romance can be used as a weapon to gain influence and change the course of history. Are you smart enough to outwit your opponents and advance your position? Or, will playing the game cause you to lose your head?

Haven
This romantic, open world, RPG follows two lovers who’ve escaped to a forgotten planet in order to be together and now must do whatever they can to survive & keep their relationship intact.

Evil Genius 2: World Domination
Take down the good guys, build wonderfully wicked devices, create a cool lair perfect for evil plotting, train minions to execute your plans, and stop at nothing short of world domination, in this sequel to the “cult classic” original released in 2004.

30XX
Inspired by Mega Man X, this second roguelike, action platformer from Batterystaple Games, which takes place 1000 years after their first game, 20XX, will allow players to jump, shoot, and slash their way through ever-changing worlds, alone or with a friend.

Lost at Sea
What makes life worth living? Finding the answer to this is one of the goals players are tasked with in this interesting mix of survival, horror, mystery, puzzle, and exploration game, where death is on the hunt, memories must be reclaimed, and life, as in reality, is fleeting.

Dreamscaper
Take a deep dive into the subconscious of Cassidy, a young woman dealing with depression, in order to save her from a dark fate in this action RPG which allows players to manipulate elements, warp space, control time, and use hack and slash combat to battle nightmarish bosses which embody isolation, negativity, and fear.

Hundred Days: Winemaking Simulator
Although we know nothing about the subject at hand, we’re definitely intrigued by this simulator that takes players through the process of winemaking, starting with growing their own grapes (despite challenges such as weather) all the way to creating a finished product which will be named, bottled, and sold. Do you have what it takes to run a successful vineyard?

El Hijo: A Wild West Tale
A refreshing, family friendly take on the wild west adventure, which follows El Hijo, a young boy who uses cunning and stealth to outsmart villains and overcome great dangers while on a journey to find his mother.

If you’d like to watch any or all of the Guerrilla Collective event, you can do so via the links below.
Day 1
Day 2
Day 3

You can read more about the Guerrilla Collective here.

Want to discover even more great indie titles releasing over the next several months? Check out our previous article, “25 Indie Games We Can’t Wait to Play.”