Top Posts
Slice of Life, Visual Novel, I’m Oh So...
Craft, Build, and Explore with Relaxing, Open World...
Hidden Object, Puzzle Adventure, Darkarta: A Broken Heart’s...
Try a Free Demo of Murder Mystery, Visual...
What You Need to Know About Mega Evolutions...
A List of Physical, Collector Editions for Titles...
Set Sail on an Incredible, Zelda-esque Adventure When...
First 4 Figures Opens Pre-Orders for The Legend...
Our Interview with Tag of Joy About Point...
Our Interview with Cyrille Bonard About His Lively,...
Our Interview with Noema Games About Point &...
Our Interview with Marina Sciberras from Cowleyfornia Studios...
Our Interview with William Kruger from Silvernode Studios...
Our Interview with Jacob Sporrong About His Visual...
Tune in for a Season of Live News...
Pathea Games Announces Puzzle Adventurer, Ever Forward, for...
Reshiram, Zekrom, & Kyurem Come to Tier 5...
Suit up for Action with This Line of...
EMMA: Lost in Memories Journeys to Consoles
25 Indie Games We Can’t Wait to Play
Destroy All Humans! Announced for Physical Release on...
Spike Chunsoft Announces the Danganronpa Trilogy for Mobile...
Celebrate the Return of Final Fantasy VII with...
Our Top 10 Ways to Use an Elite...
Cat Quest “Pawsome Pack” Coming July 31st for...
Begin Your “Journey” on Steam, June 11th
Several Exciting Demos You Can Download for Free...
Rhythm, Action Adventure, Giraffe & Annika Travels to...
“Geek Out” Your Christmas Tree with These Cool...
Our Interview with Ayu Sakata, Writer & Production...
First 4 Figures Announces an Official Facebook Page...
Sport, Showcase, & Embrace the Latest Merchandise from...
Story of Seasons: Friends of Mineral Town is...
Our Interview with Andy Mitchell About His Upcoming...
Harvest Moon: Mad Dash Comes to Mobile Devices
Our Interview with Kristi Ramot & Dagmar Blommaert...
La-Mulana I & II Venture to Consoles
Melee Brawler, Drill Man Rumble, Comes to Steam...
Monster Hunter: World The Official Complete Works Releases...
Infuse Studio’s Breathtaking Exploration Game, Spirit of the...
Our Interview with Missing Game Studio About Their...
Explore Ruins & Hunt for Artifacts When Adam’s...
Our Interview with Lantern Studio’s Art Director, Beidi...
Luigi’s Mansion 3 Multiplayer Pack Part 1 Has...
NIS America Announces 3 Big Additions to Their...
Our Interview with Baseline Games About Developing the...
Indie Publisher, Ratalaika Games Announces What’s Next in...
Play Asia Opens Physical Pre-Orders for Twin Breaker:...
Multiplayer Races to Mario Kart Tour March 8th
A Free Demo of Final Fantasy VII Remake...
Adorable 3D Platformer, Lumote, Releases on Steam
Funko POP! Announces 9 New Additions to Their...
Action RPG, Sparklite, from NC Developers, Red Blue...
Wunderling, a Mario-esque Platformer with a Twist, Releases...
Our Interview with Avery Howell from Malheur Games...
Our Interview with Journey Bound Games About Their...
Langrisser I & II Demo Lands on the...
A Free Demo of Pokémon Mystery Dungeon: Rescue...
“Marvel’s Spider-Man Script Book” Swings Into Bookstores This...
Our Interview with Garrick Campsey About His Unique...
Square Enix Announces a Kingdom Hearts All-in-1 Package...
Apply Now for Full-Time Openings & Summer Internships...
Get Ready to “Wall Jump” with Family &...
First Person, Sci-Fi Puzzler, The Turing Test, Launches...
A “How To” For Defeating Landorus
Mobile Title, Dragon Quest of the Stars, Releases...
Our Interview with Jared Barr from Thetau Games...
Upcoming Toy, Game, & Comic Book Conventions You...
Nintendo Announces an Animal Crossing: New Horizons Switch...
Humorous, Action RPG Kofi Quest: Alpha MOD Ventures...
Mega Man Blasts into Action in the Latest...
Try Out the Free Demo of Yooka-Laylee &...
Capcom Announces What’s Next for Monster Hunter World:...
Satisfy Your Hunger For Nostalgia with a BurgerTime...
Interview with Emma Ramsay & Andy Yong, the...
Our Interview with Carlo Orlandi, Co-Developer of the...
An Interview with Developer Dimitri Adoniou About His...
The North Wilkesboro Speedway is Coming to iRacing
A “How To” for Defeating Team GO Rocket...
Our Interview with Chris Otey, Lead Designer for...
A Fast & Charge TM Guide for the...
Minecraft Earth Hits Mobile Devices Later This Year,...
Super Mario Maker 2 is Coming to the...
Konami Announces a Castlevania Anniversary Collection for PC...
Mark Backler from Sketchbook Games Talks About His...
Azelf Enters Tier 5 Raids November 24th
Warm Up with a Cool Sweater from Merchoid
Terrakion, Cobalion, and Virizion Return to Tier 5...
Home Interviews Interview: Sandeep Rai – Author of PlayStation Vita: Year One
Interviews 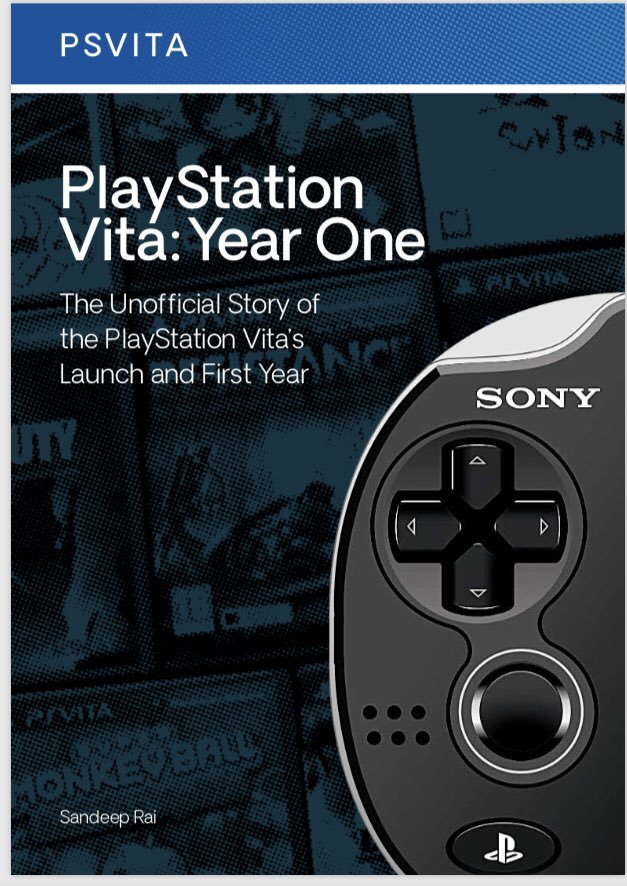 If you’re a fan of the PlayStation Vita, then you might be interested in a new book that’s being written by Sandeep Rai. It’s an “unofficial” chronicling of the system’s initial launch and its first year in existence.

As an independent author, Mr. Rai has decided to run a Kickstarter campaign to raise funds for his book’s publication. Intrigued by the concept of his project and his ambition to get his book into the hands of readers, we decided to ask the up and coming writer a few questions.

Game Cuddle (GC): What was your inspiration for writing this book? Why was it important to you to write it?
Sandeep Rai (SR): There were really two things that inspired me to write this book. The first is the Vita itself. I’ve been a fan of the Vita ever since that first press conference in 2011 when Sony revealed it to the world. My love for the device inspired me to start my YouTube channel where I primarily review and talk about Vita and PSP games.

The second, was Jeremy Parish’s “Game Boy World” series of books where he looks back at the Game Boy and its games. (They are great books by the way). I wanted to create a Vita equivalent to “Game Boy World.”

GC: How long did it take to get it from a concept to a fully written book?
SR: So, the book isn’t finished yet. I’m around two-thirds done after around 8 months, and, it has been slow at times. I am balancing the book with my regular job and having two kids.

The book will include retrospectives on some of the games that had the biggest impact (both positive and negative) on the system’s reputation and, in order to write about them, I am going back and replaying them. It adds more time, but I feel like I can’t write effectively about a game if I haven’t played it in 5 years.

Researching the book has also taken a surprisingly long time. I’ve probably gone through hundreds of articles and videos by now!

The Kickstarter will have a delivery date of October 2018. Given the amount of writing I have left to do, this will not be difficult to achieve but I want to set a conservative timeframe and if I exceed it, that will be great.

GC: Is this your 1st time authoring a book? Do you have other writing experience?
SR: Writing a book about the game industry is not something I have experience in doing. I’m more used to writing business reports in my day job!

I have written reviews and articles for Handheld Players, Switch Player, and a couple of other gaming sites. One of my editors is the founder and editor of Handheld Players, so it helps having someone with more experience to provide their input.

GC: What type of information are you covering regarding the release and 1st year of the system?
SR: In this book, I take a look back at the launch of the Vita and its first year on the market. The Vita was labelled a “failure” just months after its launch and there were many reasons for this.

I explore the highs and lows of the Vita’s first year and how its performance and the negative reputation it obtained, continued to define the Vita for its life.

GC: Is it more of a fact-based book or do you give a lot of your personal insight/opinions/ experiences?
SR: It’s primarily fact-based. I want the book to be a historical look back more than anything else.

GC: You mention in conversations about the book on Twitter that “Year One” includes interviews. Who are some of the people you interviewed and what sort of things did you talk about?
SR: I’ll have more information to share on that in the coming days and weeks. (Stay tuned)

GC: Why did you choose Kickstarter to raise funds?
SR: The book will be available digitally, but I really wanted to be able to produce it as a physical book. As someone trying to launch an independent book, Kickstarter is a great way to drum up attention and also to gauge demand for physical copies.

I am also hoping that I could leverage a successful Kickstarter to open up more doors and interview more developers of some of the year 1 games.

GC: What are your Kickstarter goals?
SR: I’ve set the goal at 1000 (British) pounds (about $1,392). The campaign will run for 30 days and rewards will include the option for a physical copy of the book or digital.

As someone working on this book independently, I am not able to promise a variety of physical bonus rewards, instead, my stretch goals will involve adding content to the book.

GC: The campaign will launch Thursday, 2/22?

SR: The campaign will go live on the 22nd of February (the 6th birthday of the Vita’s worldwide launch).

GC: Where will the book be available for purchase? Will it sell in retail stores? Will there be more books?
SR: I will sell it digitally once it’s complete, on digital book stores like iBooks. But, I don’t think I will be able to sell the book physically outside of the Kickstarter due to the printing costs and uncertainty of how many copies to have printed.

If the Kickstarter is successful, and I can see demand for it, I’d love to make this a series of books focusing on each year of the Vita’s life.

GC: Anything else you’d like for people to know about you, the book, the campaign, and/or the future of this project?
SR: It’s quite nerve-racking and exciting at the same time, launching a Kickstarter. I hope it succeeds, but most of all I hope to deliver a book worthy of people’s time and money.

The book’s Kickstarter campaign officially starts tomorrow, Thursday, 2/22. If you’d like to help, you can give to this worthy cause by linking here. (UPDATE: After a successful Kickstarter campaign, the book is now available for digital & physical purchase on Mr. Rai’s website).

A big thanks to Mr. Rai for talking to us about his new book. We have confidence that his Kickstarter campaign will be a great success and we look forward to the release of “PS Vita: Year One – The Unofficial Story of the PlayStation Vita’s Launch & Its First Year.”