Top Posts
Adorable Adventurer, Turnip Boy Commits Tax Evasion, Gets...
Watch an All-Female Cast of Speedrunners During the...
Playdate Pre-Orders are Now Open
Our (Quick) Review of Action Platformer, Effie, from...
Sign-Up to Play the Pre-Alpha of Relaxing Community...
Exciting (Steam) Game Demos You May Want to...
Mythological Metroidvania, Mira: The Legend of the Djinns,...
5 Fun Gift Ideas for the Pokémon Fan
First 4 Figures Opens Pre-Orders for 2 New...
Decorate Your Tree with These Cool Keepsake Ornaments...
Mark Your Calendar for the Limited Run Games...
June: Tales from Cyberspace Seeks Support on Kickstarter
Our 10 Favorite Game Trailers of E3 2021
Arcade 1UP Announces 4 Exciting New Cabinets Perfect...
Eastasiasoft Announces 10 Titles for Summer Release
11 Eye-Catching Indie Games Coming to Kickstarter
Cool Toy, Game, & Comic Cons Happening in...
10 Games You Can Support on Kickstarter Right...
Tune in for E3, Summer Game Fest, and...
Slice of Life, Visual Novel, I’m Oh So...
Craft, Build, and Explore with Relaxing, Open World...
Hidden Object, Puzzle Adventure, Darkarta: A Broken Heart’s...
Try a Free Demo of Murder Mystery, Visual...
What You Need to Know About Mega Evolutions...
A List of Physical, Collector Editions for Titles...
Set Sail on an Incredible, Zelda-esque Adventure When...
First 4 Figures Opens Pre-Orders for The Legend...
Our Interview with Tag of Joy About Point...
Our Interview with Cyrille Bonard About His Lively,...
Our Interview with Noema Games About Point &...
Our Interview with Marina Sciberras from Cowleyfornia Studios...
Our Interview with William Kruger from Silvernode Studios...
Our Interview with Jacob Sporrong About His Visual...
Tune in for a Season of Live News...
Pathea Games Announces Puzzle Adventurer, Ever Forward, for...
Reshiram, Zekrom, & Kyurem Come to Tier 5...
Suit up for Action with This Line of...
EMMA: Lost in Memories Journeys to Consoles
25 Indie Games We Can’t Wait to Play
Destroy All Humans! Announced for Physical Release on...
Spike Chunsoft Announces the Danganronpa Trilogy for Mobile...
Celebrate the Return of Final Fantasy VII with...
Our Top 10 Ways to Use an Elite...
Cat Quest “Pawsome Pack” Coming July 31st for...
Begin Your “Journey” on Steam, June 11th
Several Exciting Demos You Can Download for Free...
Rhythm, Action Adventure, Giraffe & Annika Travels to...
“Geek Out” Your Christmas Tree with These Cool...
Our Interview with Ayu Sakata, Writer & Production...
First 4 Figures Announces an Official Facebook Page...
Sport, Showcase, & Embrace the Latest Merchandise from...
Story of Seasons: Friends of Mineral Town is...
Our Interview with Andy Mitchell About His Upcoming...
Harvest Moon: Mad Dash Comes to Mobile Devices
Our Interview with Kristi Ramot & Dagmar Blommaert...
La-Mulana I & II Venture to Consoles
Melee Brawler, Drill Man Rumble, Comes to Steam...
Monster Hunter: World The Official Complete Works Releases...
Infuse Studio’s Breathtaking Exploration Game, Spirit of the...
Our Interview with Missing Game Studio About Their...
Explore Ruins & Hunt for Artifacts When Adam’s...
Our Interview with Lantern Studio’s Art Director, Beidi...
Luigi’s Mansion 3 Multiplayer Pack Part 1 Has...
NIS America Announces 3 Big Additions to Their...
Our Interview with Baseline Games About Developing the...
Indie Publisher, Ratalaika Games Announces What’s Next in...
Play Asia Opens Physical Pre-Orders for Twin Breaker:...
Multiplayer Races to Mario Kart Tour March 8th
A Free Demo of Final Fantasy VII Remake...
Adorable 3D Platformer, Lumote, Releases on Steam
Funko POP! Announces 9 New Additions to Their...
Action RPG, Sparklite, from NC Developers, Red Blue...
Wunderling, a Mario-esque Platformer with a Twist, Releases...
Our Interview with Avery Howell from Malheur Games...
Our Interview with Journey Bound Games About Their...
Langrisser I & II Demo Lands on the...
A Free Demo of Pokémon Mystery Dungeon: Rescue...
“Marvel’s Spider-Man Script Book” Swings Into Bookstores This...
Our Interview with Garrick Campsey About His Unique...
Square Enix Announces a Kingdom Hearts All-in-1 Package...
Apply Now for Full-Time Openings & Summer Internships...
Get Ready to “Wall Jump” with Family &...
First Person, Sci-Fi Puzzler, The Turing Test, Launches...
A “How To” For Defeating Landorus
Mobile Title, Dragon Quest of the Stars, Releases...
Our Interview with Jared Barr from Thetau Games...
Upcoming Toy, Game, & Comic Book Conventions You...
Nintendo Announces an Animal Crossing: New Horizons Switch...
Humorous, Action RPG Kofi Quest: Alpha MOD Ventures...
Mega Man Blasts into Action in the Latest...
Try Out the Free Demo of Yooka-Laylee &...
Capcom Announces What’s Next for Monster Hunter World:...
Satisfy Your Hunger For Nostalgia with a BurgerTime...
Interview with Emma Ramsay & Andy Yong, the...
Our Interview with Carlo Orlandi, Co-Developer of the...
An Interview with Developer Dimitri Adoniou About His...
The North Wilkesboro Speedway is Coming to iRacing
A “How To” for Defeating Team GO Rocket...
Our Interview with Chris Otey, Lead Designer for...
A Fast & Charge TM Guide for the...
Minecraft Earth Hits Mobile Devices Later This Year,...
Super Mario Maker 2 is Coming to the...
Konami Announces a Castlevania Anniversary Collection for PC...
Mark Backler from Sketchbook Games Talks About His...
Home Features Nindies Summer Showcase 2018
FeaturesGame 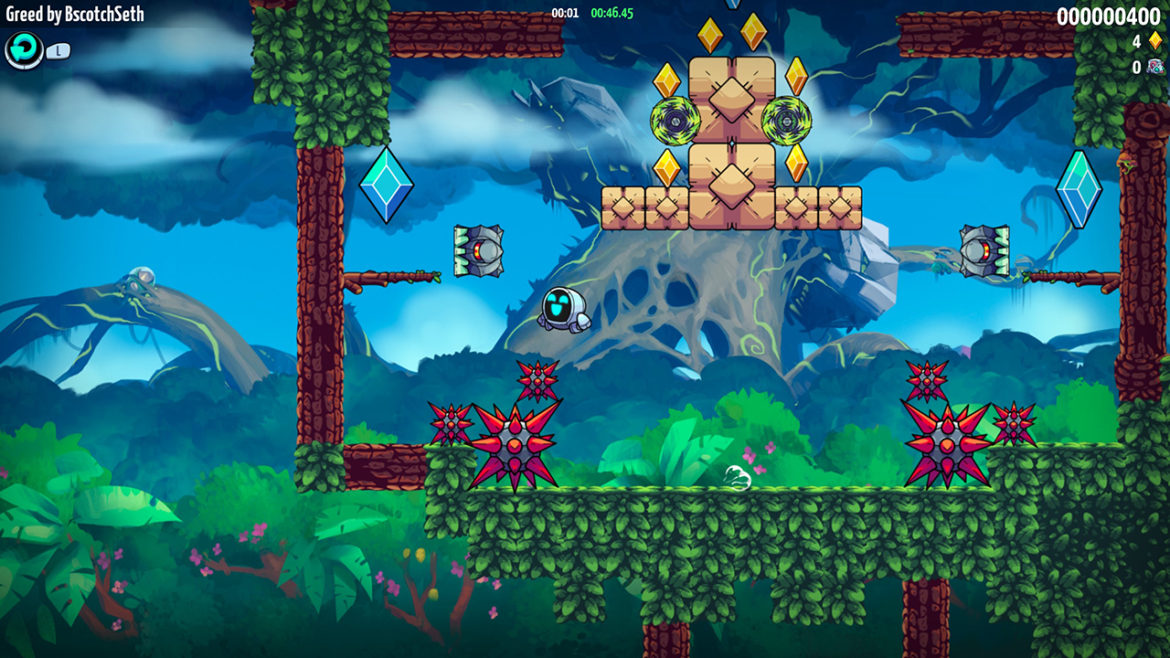 Today, Nintendo spilled the beans on what’s next in their line-up of indie titles for the Switch console. The brief but meaningful presentation was jam-packed with strategy, action, platforming, and even the opportunity to play as a mischievous goose.

Here’s a look at what’s in store for indie enthusiasts over the coming months.

Play the part of a drifter strategizing his way through a dark world, which bares the ravages of a violent past. and use long forgotten technology to try and cure yourself from a mysterious disease.

Exclusive to the Switch version will be an outfit with special abilities and 2 weapons.

A frantic, hectic archery battler that features a 6 player battle mode, 4 person co-op, and over 400 levels of combat. The Switch version will include all content from the Dark World & Ascension expansions and the ability to play as characters Madeline and Badeline.

A unique take on the Tetris-esque, falling block gameplay that involves the use of grappling hooks and a tiny, heroic (& customizable) characters who help players stack like colored treasure chests and find a corresponding key to unlock points. Play in challenge mode, a head to head match on-line, or local versus.

An arcade game about 2 cubes, Charcoal & Mustard, who attempt to cheer-up their best friend. Gun, laser, blast, and crash your way through nine destructible worlds. Play with or against others in competitive and party modes inside over a dozen origami thunderdomes.

Exclusive to the Switch version will be the ability to play as Joy-Bot, an “enemy spawner” that can be controlled with one Joy-Con.

Mineko’s Night Market is a narrative driven simulation game about shopping, crafting, selling, and cats, that’s inspired by Japanese culture and filled with mysteries to solve.

Four diverse characters play an important part in rewriting history for Gunn City, in this upcoming sequel. Play alone or with a friend in a new adventure mode. Explore a metropolis on the brink of crisis dealing with gunpowder overdoses, a mad emporer trying to expand the city too quickly, and old spirits that are creeping back into the world.

When you need a break from regular gameplay enjoy going against 3 friends, arming yourself with a sword, a gun, and three bullets per life.

Included with the Switch version will be a digital graphic novel, called Trigger Soul, created by French artist, Valentin Seiche.

Take on the role of Ash, a stranger trying to save the world of New Haven after an evil ARC empire changed its creatures into mutants. Experience a 2D co-op action game that mixes platforming with gun and sword play and features upgradable weapons, a variety of abilities, and a HD rumble feature.

The World Next Door

The World Next Door follows the story of Jun, a rebellious teenager stuck in a parallel world, inhabited by magical creatures. Make friends with an unusual cast of characters and solve the mysteries of this world in this narrative driven action game, filled with branching dialogue and fast-paced, real time puzzle battles.

Levelhead is an innovative game that allows players to create their own levels and enjoy those made by others. Go through a single player campaign or platform/build with up to 3 other friends.

King of the Hat

Crush your opponent’s hat before they crush yours in this quick response, fighting based, party game, for up to 4 players. Get really good at the game’s simple, two button mechanics and go against others on-line to try and rank #1.

Wreak havoc on everyone around you as a goose on the loose, in this simulation game full of slapstick humor and antics.

Into the Breach is a turn-based strategy game in which players must control powerful mechs from the future to save the world from an alien threat brewing beneath the earth’s surface.

Nintendo also revealed a new channel that’s been created for Switch users which will focus completely on indie games. It will include Q&A, updates, news, and developer stories, and is up and running as of today.

If you’d like to watch the (almost) 16 minute, Nindies presentation, you can do so through the Nintendo YouTube channel.