Top Posts
Adorable Adventurer, Turnip Boy Commits Tax Evasion, Gets...
Watch an All-Female Cast of Speedrunners During the...
Playdate Pre-Orders are Now Open
Our (Quick) Review of Action Platformer, Effie, from...
Sign-Up to Play the Pre-Alpha of Relaxing Community...
Exciting (Steam) Game Demos You May Want to...
Mythological Metroidvania, Mira: The Legend of the Djinns,...
5 Fun Gift Ideas for the Pokémon Fan
First 4 Figures Opens Pre-Orders for 2 New...
Decorate Your Tree with These Cool Keepsake Ornaments...
Mark Your Calendar for the Limited Run Games...
June: Tales from Cyberspace Seeks Support on Kickstarter
Our 10 Favorite Game Trailers of E3 2021
Arcade 1UP Announces 4 Exciting New Cabinets Perfect...
Eastasiasoft Announces 10 Titles for Summer Release
11 Eye-Catching Indie Games Coming to Kickstarter
Cool Toy, Game, & Comic Cons Happening in...
10 Games You Can Support on Kickstarter Right...
Tune in for E3, Summer Game Fest, and...
Slice of Life, Visual Novel, I’m Oh So...
Craft, Build, and Explore with Relaxing, Open World...
Hidden Object, Puzzle Adventure, Darkarta: A Broken Heart’s...
Try a Free Demo of Murder Mystery, Visual...
What You Need to Know About Mega Evolutions...
A List of Physical, Collector Editions for Titles...
Set Sail on an Incredible, Zelda-esque Adventure When...
First 4 Figures Opens Pre-Orders for The Legend...
Our Interview with Tag of Joy About Point...
Our Interview with Cyrille Bonard About His Lively,...
Our Interview with Noema Games About Point &...
Our Interview with Marina Sciberras from Cowleyfornia Studios...
Our Interview with William Kruger from Silvernode Studios...
Our Interview with Jacob Sporrong About His Visual...
Tune in for a Season of Live News...
Pathea Games Announces Puzzle Adventurer, Ever Forward, for...
Reshiram, Zekrom, & Kyurem Come to Tier 5...
Suit up for Action with This Line of...
EMMA: Lost in Memories Journeys to Consoles
25 Indie Games We Can’t Wait to Play
Destroy All Humans! Announced for Physical Release on...
Spike Chunsoft Announces the Danganronpa Trilogy for Mobile...
Celebrate the Return of Final Fantasy VII with...
Our Top 10 Ways to Use an Elite...
Cat Quest “Pawsome Pack” Coming July 31st for...
Begin Your “Journey” on Steam, June 11th
Several Exciting Demos You Can Download for Free...
Rhythm, Action Adventure, Giraffe & Annika Travels to...
“Geek Out” Your Christmas Tree with These Cool...
Our Interview with Ayu Sakata, Writer & Production...
First 4 Figures Announces an Official Facebook Page...
Sport, Showcase, & Embrace the Latest Merchandise from...
Story of Seasons: Friends of Mineral Town is...
Our Interview with Andy Mitchell About His Upcoming...
Harvest Moon: Mad Dash Comes to Mobile Devices
Our Interview with Kristi Ramot & Dagmar Blommaert...
La-Mulana I & II Venture to Consoles
Melee Brawler, Drill Man Rumble, Comes to Steam...
Monster Hunter: World The Official Complete Works Releases...
Infuse Studio’s Breathtaking Exploration Game, Spirit of the...
Our Interview with Missing Game Studio About Their...
Explore Ruins & Hunt for Artifacts When Adam’s...
Our Interview with Lantern Studio’s Art Director, Beidi...
Luigi’s Mansion 3 Multiplayer Pack Part 1 Has...
NIS America Announces 3 Big Additions to Their...
Our Interview with Baseline Games About Developing the...
Indie Publisher, Ratalaika Games Announces What’s Next in...
Play Asia Opens Physical Pre-Orders for Twin Breaker:...
Multiplayer Races to Mario Kart Tour March 8th
A Free Demo of Final Fantasy VII Remake...
Adorable 3D Platformer, Lumote, Releases on Steam
Funko POP! Announces 9 New Additions to Their...
Action RPG, Sparklite, from NC Developers, Red Blue...
Wunderling, a Mario-esque Platformer with a Twist, Releases...
Our Interview with Avery Howell from Malheur Games...
Our Interview with Journey Bound Games About Their...
Langrisser I & II Demo Lands on the...
A Free Demo of Pokémon Mystery Dungeon: Rescue...
“Marvel’s Spider-Man Script Book” Swings Into Bookstores This...
Our Interview with Garrick Campsey About His Unique...
Square Enix Announces a Kingdom Hearts All-in-1 Package...
Apply Now for Full-Time Openings & Summer Internships...
Get Ready to “Wall Jump” with Family &...
First Person, Sci-Fi Puzzler, The Turing Test, Launches...
A “How To” For Defeating Landorus
Mobile Title, Dragon Quest of the Stars, Releases...
Our Interview with Jared Barr from Thetau Games...
Upcoming Toy, Game, & Comic Book Conventions You...
Nintendo Announces an Animal Crossing: New Horizons Switch...
Humorous, Action RPG Kofi Quest: Alpha MOD Ventures...
Mega Man Blasts into Action in the Latest...
Try Out the Free Demo of Yooka-Laylee &...
Capcom Announces What’s Next for Monster Hunter World:...
Satisfy Your Hunger For Nostalgia with a BurgerTime...
Interview with Emma Ramsay & Andy Yong, the...
Our Interview with Carlo Orlandi, Co-Developer of the...
An Interview with Developer Dimitri Adoniou About His...
The North Wilkesboro Speedway is Coming to iRacing
A “How To” for Defeating Team GO Rocket...
Our Interview with Chris Otey, Lead Designer for...
A Fast & Charge TM Guide for the...
Minecraft Earth Hits Mobile Devices Later This Year,...
Super Mario Maker 2 is Coming to the...
Konami Announces a Castlevania Anniversary Collection for PC...
Mark Backler from Sketchbook Games Talks About His...
Home Current Our Interview with Garrick Campsey About His Unique 2D, Cloth Platformer, Lazr
CurrentFeaturesGameGame Dev/PubInterviewsKickstarter 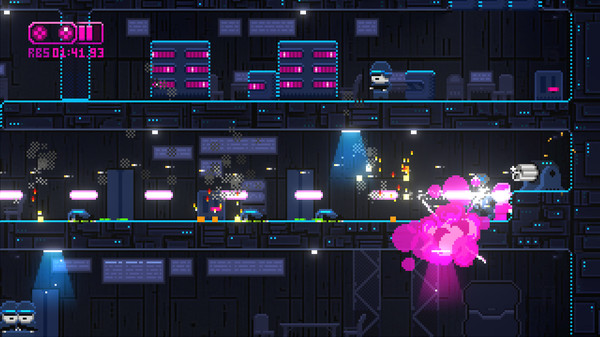 We recently spoke to developer, Garrick Campsey about his unique, 2D platformer, Lazr, which allows players to move around using a simulated, netted cloth which, when shot at, catches on fire and produces a magnificent effect. It also poses quite the challenge to anyone trying to climb, swing, or catapult their way through a level in the game.

Mr. Campsey was kind enough to answer a few questions about his upcoming title.

Tell us about yourself and how you got started as a video game developer.
I got started in 2012, with XNA, after watching “Indie Game,” the movie. Previously, I had worked as a graphic designer, web designer, and visual FX artist, and had experience designing code.

Tell us about your upcoming title, Lazr.
Lazr is an action platformer with cloth (clothformer) that could be described as an “ultrahard” or difficult game.

Movement is very precise, and the player can interact with the world in many different ways, so there is much to explore and figure out. The city in which the full game takes place is very large.

Where did the idea of a “cloth” platformer come from?
It started when a fellow programmer suggested I do a cloth sim.

After doing that, I merged a platformer into the cloth sim to see what it would be like, and it was kinda fun to just climb around on the cloth.

After building a few levels and playing it with some friends, it felt like there might be a game here.

So,  I started writing the story.

The animation of the cloth being destroyed is spectacular. How did you create this special effect?
In game, lasers that collide with cloth cause the cloth points to detach from each other and burn. As the cloth points burn, they emit fire particles which, over time, become smoke particles.

The cloth simulation is based around verlet integration. 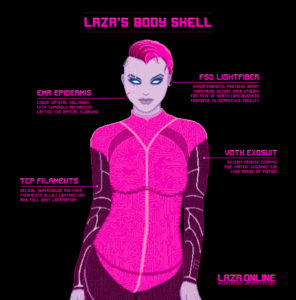 Lazr is an AI that can transfer herself into a robotic body, powered by a portable nuclear fusion reactor, allowing her to fire lasers out of her eyes.

Her robotic shell is reprinted each time it’s destroyed, allowing the player to customize, or modify Lazr to the level and challenges they’re facing.

What are some of the ways we can customize Lazr?

Customization is divided into 3 categories:

Weapon mods allow the player to experiment with different offensive strategies, like rapid fire at the cost of lower overall health.

Movement mods affect Lazr’s dash and slide, making them longer or making them cause damage, at the cost of reduced health.

How many levels are in the game? How do they vary?

The total number of levels in the game is planned to be in the hundreds.

Each district of Alpha City One contains around 20 levels, with each district visually themed based on the mega-corporation that controls or owns that district.

Lower in the city, near the underground, you’ll find abandoned districts, and districts controlled by gangs.

It appears you put a lot of thought into designing the levels so they’re appealing to speedrunners. Why was this something you wanted to do?
I really enjoy watching speedruns and studying the speedrunning community.

I enjoy watching people completely master a game, and really push it to its limits, bending and breaking the systems to reveal interesting consequences.

I also enjoy designing those systems.

I think the competitive aspect to speedrunning exists in a useful harmony with difficulty. Lazr was designed to be very difficult and to reward skillful play.

The skill ceiling is very high for competitive play and the systems were designed to be consistent and difficult to break, so records based on skill have more longevity.

The game has multiple endings. What types of choices will players make in the game that will help determine which ending they get?

In the full game, there are corporations that provide contracts for the player to choose from. These contracts are often destructive in nature, the consequences of which, cause relations with other corporations to change.

Being hired to destroy a Humacorp psychic research facility will affect how the CEO of Humacorp feels about the player.

You can never keep everyone happy, by design.  You’ll be hunted by corporations you have poor relations with.

The music in the game really does a great job of setting the tone and pace for players. How did you and William Kingston Davies conceive of and create this amazing sound?
I originally started by posting music that I thought was fitting, then Will wrote a track and sent it to me.

It fit so well, we agreed to work on more.

He’s a talented and creative composer.

You’re currently running a Kickstarter campaign for Lazr, which has some truly incredible rewards and stretch goals. Can you tell us about the Lazr competition you have planned if donations hit $50k?
At $50k I want to hold an international speedrunning competition where players can enter video entries for specific categories, with the winners getting cash prizes. Videos will be submitted via a YouTube link and must be posted within a specific time window to be considered.

I’m working with Top Hat Studios (my publisher) to provide physicals for Xbox One, PlayStation 4, Nintendo Switch, and PS Vita.

What’s your best piece of advice to fellow indie developers who are creating their first platformer?
Write as much of the code yourself as you can. You’ll learn more and become a better developer as you face and overcome challenges.

Making a game is a journey. It’s like moving a mountain. You can’t rush it. You just work on it everyday until it’s done.

It’s an extraordinary level of control and expression that no other medium can provide.

Thanks so much for taking the time to answer our questions. We wish you the best with your Kickstarter campaign and look forward to the release of Lazr later this year.

You can help bring this gorgeous & unique 2D platformer to PC and consoles by supporting it right now on Kickstarter. The campaign runs through February 24th.

Want to give the game a try? Play the free demo on itch.io which includes 1 Humacorp district with 15 levels and 2 bosses.

Keep up with the latest news about Lazr by following developer, Garrick Campsey on Twitter. Join in the conversation about the game via the LazrGame Discord channel.

LAZR is now available to wishlist on Steam.

Check Out the Latest Game Trailers for...